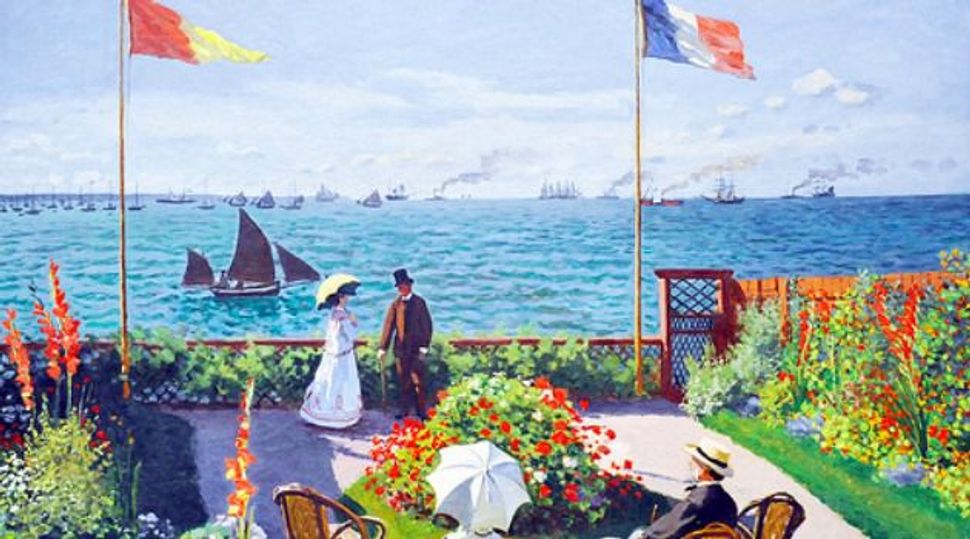 The newly found Monet painting is similar to the French impressionist’s ‘Garden at Sainte-Adresse.’ Image by Wikipedia

A Monet painting was found in the suitcase that German art collector Cornelius Gurlitt took to the hospital before he died.

The executor of Gurlitt’s estate last week discovered the French Impressionist artwork in a suitcase handed over to him by the hospital, according to reports.

Gurlitt, whose uncovered trove of Nazi-looted artworks was discovered two years ago, died in early May, several months after heart bypass surgery. He had agreed to return the mostly early 20th-century paintings to the heirs of the rightful owners.

The Monet, believed to be from around 1864 and similar to the French artist’s “View of Sainte-Adresse,” will be researched to determine whether it was stolen by the Nazis as were many other works in Gurlitt’s collection.

Some 1,400 works were confiscated from his home in 2012 in the course of an investigation for tax evasion. Other works were subsequently found in Gurlitt’s second home in Salzburg, Austria. The investigation is now closed due to his death.

Gurlitt’s father, Hildebrand, was an art dealer on assignment to the Nazis. When the elder Gurlitt died in 1956, his son inherited the collection, which includes works by such masters as Picasso, Dürer, Renoir, Toulouse-Lautrec, Beckmann and Matisse.

A month before his death, Cornelius Gurlitt signed an agreement with the state of Bavaria and the German federal government according to which the provenance of all works would be researched, paving the way for the return of the paintings to heirs of the rightful owners.

He bequeathed the trove to the Bern Art Museum in Switzerland.