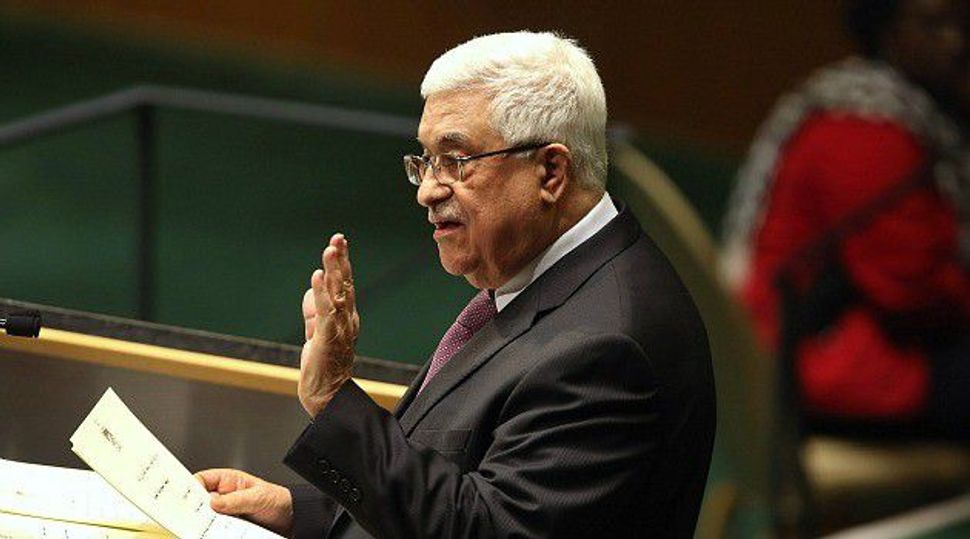 U.N. Upgrade: Mahmoud Abbas won a U.N. upgrade for the status of the Palestinian Authority in 2012. Image by Getty Images

Prime Minister Benjamin Netanyahu said he would tell U.S. Secretary of State John Kerry that Israel will rebuff any moves at the United Nations to set a timeframe for a withdrawal from territory Palestinians seek for state.

The State Department has said the two men will meet in Rome on Monday to discuss various proposals for a Palestinian state that are circulating at the United Nations.

Kerry will then meet Palestinian chief negotiator Saeb Erekat and a delegation of Arab foreign ministers in London on Tuesday, who will urge for the United States not to use its U.N. Security Council veto to block the proposals, Palestinian officials said.

U.S.-brokered peace negotiations with Israel, led by Kerry, collapsed in April. Since then, Palestinians have made unilateral efforts at the U.N. to form their own state in the occupied West Bank and in the Israeli-blockaded Gaza Strip, with East Jerusalem as its capital.

Jordan circulated a Palestinian-drafted resolution to the 15-member Security Council last month calling for Israeli occupation of Palestinian territory, captured in a 1967 war, to end by November 2016.

France, Britain and Germany are in efforts to draft a resolution of their own that could draw wider consensus.

Netanyahu, who is in the middle of campaigning for a March election, will also meet Italian Prime Minister Matteo Renzi along with Kerry.

“I will tell both of them that Israel stands, to a great extent, as a solitary island against the waves of Islamic extremism washing over the entire Middle East,” Netanyahu said on Sunday in public remarks to his cabinet.

He said Israel now faced a possible diplomatic offensive “to force upon us” such a withdrawal within two years.

“This will bring the radical Islamic elements to the suburbs of Tel Aviv and to the heart of Jerusalem. We will not allow this. We will rebuff this forcefully and responsibly. Let there be no doubt, this will be rejected.”

Israeli Foreign Minister Avigdor Lieberman, speaking on Army Radio, said it appeared the United States “is not eager to use its veto” on the Palestinian statehood issue but was seeking “maximum coordination” with Netanyahu.

Netanyahu and Washington have clashed frequently over Israeli settlement in the West Bank and East Jerusalem, leading to Israeli media speculation that a frustrated U.S. could soften its opposition to unilateral statehood steps.

But Israel’s Strategic Affairs Minister Yuval Steinitz told reporters: “I assume an anti-Israeli proposal will draw a U.S. veto. That’s how it’s always been, and that’s what we hope will happen.”

Netanyahu has said rocket fire from the Gaza Strip during a 50-day war with Hamas militants in July and August highlighted the risks Israel could face in handing over more Palestinian territory.

In Jerusalem, violence has surged in recent weeks because of a dispute over access to a holy site in an Israeli-annexed part of the city. Eleven Israelis and twelve Palestinians have been killed.