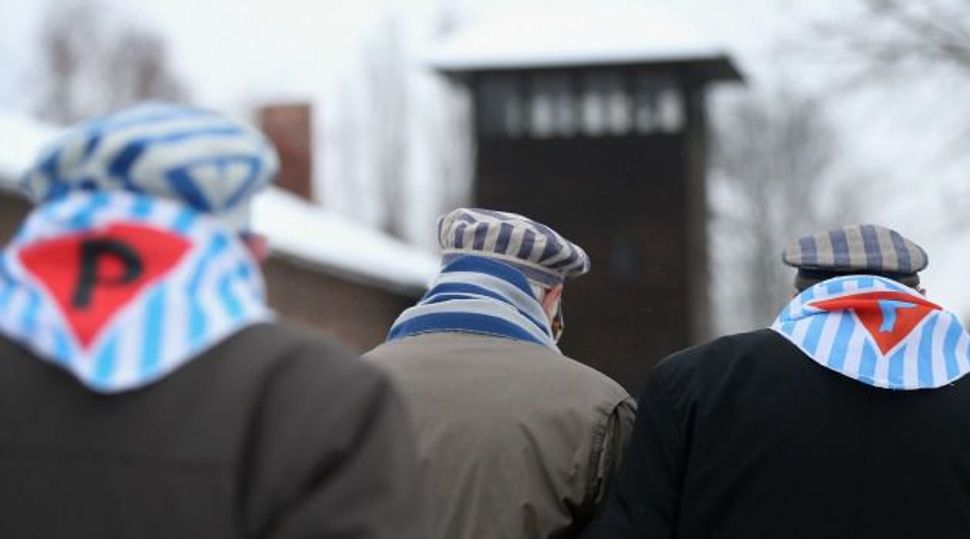 Auschwitz survivors walk on the grounds of the death camp on the 70th anniversary of its liberation from the Nazis. Image by getty images

(Reuters) — World leaders joined around 300 Auschwitz survivors at the site of the former Nazi death camp on Tuesday to mark 70 years since its liberation by Soviet troops, an anniversary held in the shadow of war in Ukraine and a rise in anti-Semitism in Europe.

Tuesday’s gathering in southern Poland marks perhaps the last major anniversary that survivors of the camp will be able to attend in numbers, given the youngest are now in their 70s. Some 1,500 attended the 60th anniversary.

Around 1.5 million people, mainly European Jews, were gassed, shot, hanged and burned at the camp in southern Poland during World War Two, before the Red Army entered its gates in winter 1945. It has become probably the most poignant symbol of a Holocaust that claimed six million Jewish lives across Europe.

The presidents of Poland, Germany, France were among hundreds attending the commemoration in a giant tent erected over the brickwork entrance to the Auschwitz II-Birkenau camp, part of the complex that is now a museum.

The railway tracks that bore Jews in wagons from all across Europe to their deaths were lit up gold, the countryside around covered in deep snow.

France’s Francois Hollande made the trip less than three weeks after Islamist gunmen killed 17 people in Paris in attacks on the Charlie Hebdo satirical weekly newspaper and a kosher supermarket.

Four French Jews were among the dead, the latest victims of a recent spate of armed attacks on Jews in Europe.

Speaking earlier in the day at the Paris Shoah memorial to French Jews who died at Auschwitz and elsewhere during World War Two, Hollande addressed France’s 550,000-strong Jewish community.

“You, French people of the Jewish faith, your place is here, in your home. France is your country,” he said.

U.S. President Barack Obama, in a statement, said the Paris attacks were a “painful reminder of our obligation to condemn and combat rising anti-Semitism in all its forms, including the denial or trivialization of the Holocaust.”

MERKEL: ‘MUST BE ON GUARD’

European Jews warn of a growing under-current of anti-Semitism, fueled by anger at Israeli policy in the Middle East and social tensions over issues of immigration, inequality and economic hardship that have contributed to a rise of far-right political movements, notably the grass-roots PEGIDA movement in Germany.

Chancellor Angela Merkel said Germans had an everlasting responsibility to fight all forms of anti-Semitism and racism.

“We’ve got to expose those who promote prejudices and conjure up bogeymen, the old ones as well as the new,” Merkel said on the eve of the anniversary.

The camp’s victims also included, among others, Roma, homosexuals and all shades of political opposition to the Nazis.

Notable for his absence was Russian President Vladimir Putin, whose backing of pro-Russian rebels in Ukraine has helped drive West-Russia relations to their lowest ebb since the Cold War.

Poland has been one of the most vociferous critics of Russia’s March annexation of Ukraine’s Crimean peninsula and its support for rebels in eastern Ukraine.

Wary of the domestic political consequences, Poland did not send a full diplomatic invitation to Putin, sources have told Reuters.

“It would be hard to imagine, in this situation, hosting Russia’s president. Albeit informally, Russia is taking part in this conflict,” Polish Justice Minister Cezary Grabarcyk told Polish ZET radio.

Russia was represented at the commemoration by Putin’s chief of staff, Sergei Ivanov. Attending a memorial event in Moscow, Putin warned of the “terrible traits” of “claims to world domination.”

“And of course, we all know how dangerous and damaging are double standards, indifference and disregard of the fate of others,” he said. “For example – the case of the tragedy these days in southeastern Ukraine, where for months civilians have been shot in cold blood in the Donbass, Luhansk and other cities and towns.”

David Wisnia, an 88-year-old survivor of Auschwitz, said on Monday the Holocaust was “almost impossible for a human mind to comprehend.” A choir boy as a child at Warsaw’s Great Synagogue, which was blown up by Nazi forces in 1943, Wisnia will sing a memorial prayer in Hebrew on Tuesday.

“I pray to God that we as human beings are able to learn something from it,” he said.