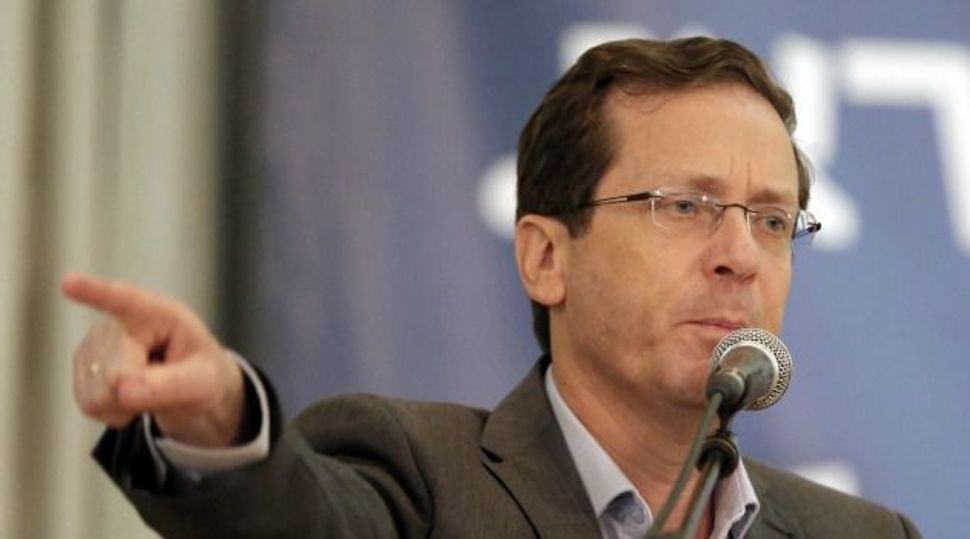 Isaac Herzog, the leader of the opposition Zionist Union Image by getty images

Benjamin Netanyahu’s chief political rival in the upcoming Israeli elections said the prime minister’s speech before the U.S. Congress will have no effect on the Iran nuclear deal being negotiated.

“There is no doubt that Prime Minister Benjamin Netanyahu knows how to deliver a speech,” opposition leader Isaac Herzog said at a campaign stop Tuesday in Israel’s South in a speech immediately following Netanyahu’s address. “But let’s face it, the speech we heard today, impressive as it is, will not stop the Iranian nuclear program. It will also not affect the upcoming agreement – not the content nor the timetable.”

Herzog, head of the Zionist Union coalition running in the current elections, added that the speech “greatly damaged the U.S.-Israel relationship. It won’t change the government’s stance and will only widen the rift with our biggest friend and strategic ally; a rift that will carry a price we will all pay.”

Israel is scheduled to hold national elections on March 17, and Netanyahu has been accused of using the speech to Congress to bolster his chances. His Likud Party is polling slightly behind Zionist Union.

Michael Oren, the former Israeli ambassador to the United States who is running for Knesset with the Kulanu list, in a Facebook post called on Netanyahu to set about repairing relations with President Barack Obama.

“Now that the speech is over, I recommend that PM Netanyahu request a one-on-one meeting with President Obama, even if just for a few minutes, in order to thank him for the Iron Dome and Arrow anti-missile systems as well as for America’s generous defense aid,” Oren wrote, adding it would be “the first step in repairing our relations with the US.”

Oren also said he hopes that the speech sparks “a serious public debate in the United States about the merits of the deal that is being negotiated.”

Zehava Gal-On, head of the left-wing Meretz party, criticized Netanyahu in a Facebook post for offering a “false scare speech” and not offering an alternative plan to what the world powers are negotiating with Iran. Gal-On called Netanyahu the “grumpy old man of international diplomacy” and “a coward.”

Israeli politicians on the right supported Netanyahu’s bid to convince the Congress to quash the agreement.

“Thank You, Prime Minister Netanyahu. The Israeli People Stand behind you. The nation of Israel lives,” Jewish Home head Naftali Bennett, who traveled to Washington with Netanyahu, posted on Facebook at the conclusion of the speech.

Former Shas party head Eli Yishai, who is heading up the Yachad party in coalition with the far-right Otzma Yehudit, said he was pleased that Netanyahu had the “courage to sound clear and determined in an era of weakness in which world leaders strive at all costs to deal with Iran.”