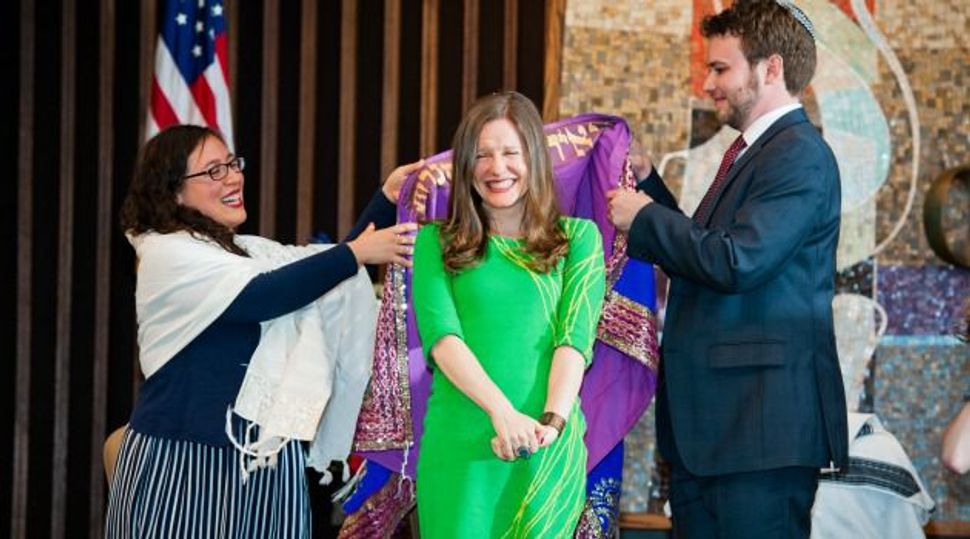 The rabbinical seminary of American Judaism’s smallest mainstream denomination will become the first major rabbinical school in the United States to admit and ordain rabbinical students who have non-Jewish spouses and partners.

The Reconstructionist Rabbinical College, which made its announcement September 30, has been debating the issue for years. Some leaders of Reconstructionist congregations had said they might leave the movement over the change.

“The issue of Jews intermarrying is no longer something we want to police,” said Rabbi Deborah Waxman, RRC’s president, in a press release.

The long debate was finally resolved in a lengthy RRC faculty meeting September 21, culminating in a vote. Waxman would not share the vote tally, citing the confidentiality of faculty deliberations.

The faculty vote resulted in the revocation of a line in the school’s policies that barred students from enrolling in the rabbinical seminary if they were married to, or in a committed relationship with, a non-Jew. The school will now accept students with non-Jewish partners.

One proposed alternative to dropping the ban was loosening the interpretation of the previous policy to allow exceptions on a case-by-case basis. Waxman told the Forward that the faculty deliberately rejected that option. “One of the things the faculty concluded was they felt that…they wanted instead to confront the issue in a very forthright and open and transparent manner, in a way that communicated principles,” Waxman said.

An RRC report issued in April related that the majority of Reconstructionist congregations that responded to a survey supported the change. Still, some leaders strongly opposed dropping the policy, with some fearing rifts in the movement.

“We know this is a challenging topic, and there’s been a wide range of opinions,” Waxman said. “I feel very confident we will keep walking this path together.”

Reconstructionist Judaism, which emphasizes Judaism’s dual status as both a culture and a religion, developed as a movement in the years prior to World War II. It currently claims about 100 affiliated congregations in the United States. RRC, its seminary, was founded in 1968.

One rabbi who had vocally opposed the policy change, Rabbi Lester Bronstein of Bet Am Shalom, a Reconstructionist congregation in White Plains, New York, said that his congregation’s board was setting up a committee to discuss the synagogue’s relationship with the Reconstructionist movement in the wake of the change. “There are no foregone conclusions as a result of this announcement,” Bronstein and other synagogue leaders wrote in a September 30 letter to the congregation. “Our leadership and clergy remain committed to engaging in the process along with you, our congregation,”

Other restrictions and requirements remain in place for RRC rabbinic candidates. According to an admissions criteria document provided by RRC, applicants must, among other things, be Jewish, have at least a year of college-level Hebrew study, and demonstrate “engagement with God, Torah, and the Jewish people.”

The decision comes amid challenges for the Reconstructionist movement. The school ordained six students in 2014 and eight students in 2015. In addition, the recently merged rabbinical school and congregational arm was projected to run a $500,000 deficit in the 2015 fiscal year. Waxman said that the deficit was strategic. “We made investments in our combined organization and in our congregations out of a vision for what we want to do, and what it’s going to take to do that,” she said.