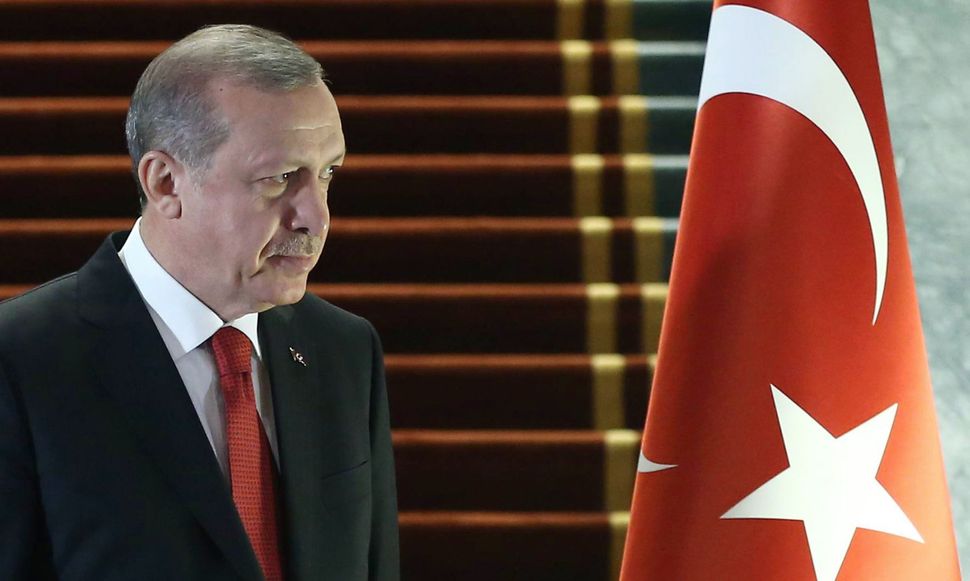 (JTA) — Less than a month after Turkish President Recep Tayyip Erdogan signaled a readiness to mend ties with Israel after years of antipathy, a delegation of American Jewish leaders has embarked on a trip to embrace Turkey’s longtime rival Greece.

Members of the Conference of Presidents of Major American Jewish Organizations are in the midst of a weeklong trip that will take them to Israel, Greece and Cyprus, the disputed Mediterranean island that has been a source of Greek-Turkish contention for decades. The trip, which includes leaders of the Greek-American community, will meet with political and religious leaders in all three countries.

Malcolm Hoenlein, the Presidents Conference’s executive vice chairman, said the trip was planned six months ago — well before Erdogan told a Turkish newspaper on Dec. 13 that he hoped to reestablish ties with Israel, which have deteriorated badly over the past decade. Within days of the interview, reports said Israel and Turkey had already struck a preliminary agreement to normalize relations.

A news release announcing the trip indicated it would address the “strategic relationship” between Israel and the two Mediterranean nations and include visits to military facilities. But Hoenlein dismissed suggestions that trip indicated a rebuff of Turkey.

“Having relations with one country does not diminish anyone else,” Hoenlein told JTA. “We want Israel to have as many relationships as possible.”

Israel and Turkey shared a close alliance in the 1990s, when trade, tourism and military cooperation increased. But relations began to cool with Erdogan’s rise to power in 2002, and broke dramatically after Israel’s deadly 2010 raid on the Mavi Marmara, a Turkish-flagged ship aiming to break Israel’s Gaza blockade, in which 10 Turks, including an American citizen, were killed. In 2011, Turkey expelled the Israeli ambassador.

At the same time, ties between Israel and Greece were warming. The two countries carried out joint military exercises and launched efforts to boost cooperation in various areas. But it was the discovery of natural gas deposits in the eastern Mediterranean Sea that gave major impetus to the relationship.

In November, Prime Minister Alexis Tsipras of Greece and Prime Minister Nicos Anastasiades of Cyprus met with Israeli Prime Minister Benjamin Netanyahu in Jerusalem, and Netanyahu is scheduled to meet both leaders again in Cyprus later this month to advance agreement on a natural gas deal.

Meanwhile, shared concern over Erdogan’s rise has led to more frequent official outings to Greece by American Jewish groups, which have begun to pivot away from decades of defending Turkey’s interests in Washington. Last year, several Jewish groups backed off their longstanding reluctance to call the World War I-era massacre of Armenians a genocide, a position they had adopted largely to avoid offending Turkey.

In 2013, a congressional caucus was launched to further cooperation among Israel, Greece and Cyprus.

“There already has been a lot of local work between organizations,” said Daniel Mariaschin, the executive vice president of B’nai B’rith, referring to the new closeness with American Greeks.

The inclusion of Cyprus in the tour itinerary is sure to be noticed in Turkey, which has occupied the northern third of the island since 1974, an action condemned by multiple U.N. Security Council resolutions. The Jewish delegation will not be visiting northern Cyprus, which declared itself independent of the Cypriot republic in 1983, a declaration recognized only by Turkey.

“The strategic relationship between Greece, Cyprus and Israel has evolved, helping to lend stability to the region with broader implications,” the Presidents Conference said in a statement. “The delegation of American Hellenic and American Jewish community leaders plans to explore the major policy issues and concerns as well as ways to foster ties between the people of the three countries. They will also visit military installations to study the security challenges in the area.”

Whether the embrace of Greece and Cyprus will complicate Turkey’s overtures to Israel has yet to be seen. Developments in Syria, which have empowered enemies of both Turkey (the PYD Kurdish militia) and Israel (Hezbollah), have created a convergence of interests between the countries. The Obama administration has also pushed hard for a reconciliation, preferring that its two closest military allies in the Middle East get along. And Israel’s security establishment misses its close cooperation with the region’s other major military.

“Turkish-Greek ties have come a long way,” said Soner Cagaptay, a Turkey expert at the Washington Institute for Near East Policy. “But once ties between Israel and Turkey are normalized, eventually Greece’s utility as an ally to Israel will be overshadowed by Turkey’s economic and military might.”

Hoenlein said it was too early to determine whether Turkey’s pivot would be long lasting.

“It’s a mercurial situation,” he said.

Jason Isaacson, the American Jewish Committee’s director of policy, said Erdogan should still be viewed with caution — not only because of his past hostility to Israel, but because of rhetoric blaming Turkey’s woes on outside interests that has veered close to anti-Semitism.

“Given the proclivities of the president of Turkey, given actions and statements regarding Israel as well as regarding the connection he has alleged between the Jewish people and unrelated political issues in Turkey, [restoring ties with Turkey] cannot substitute for the relationship Israel enjoys with Cyprus and Greece,” Isaacson said.