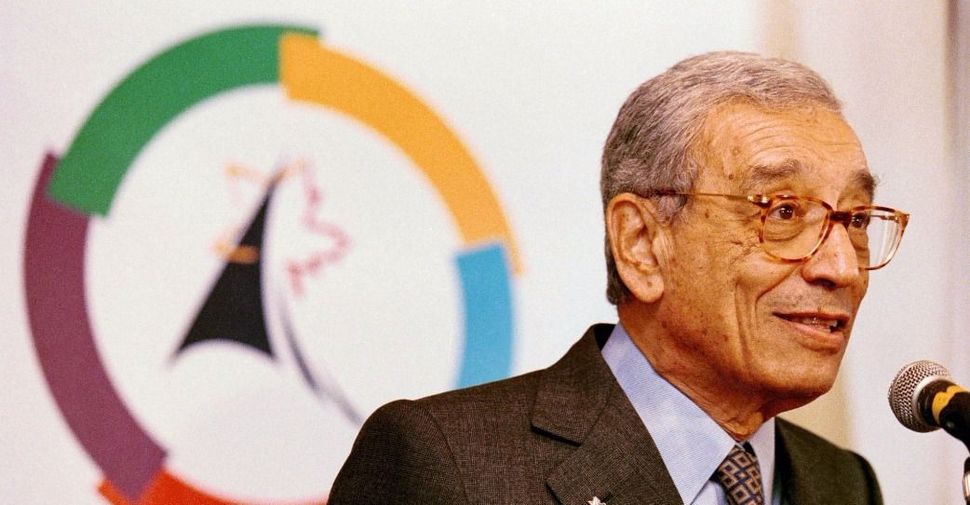 Boutros Boutros-Ghali, the former United Nations secretary-general who as a member of the Egyptian Cabinet was key to achieving the Camp David peace accords, has died.

Boutros-Ghali died Tuesday in a Cairo hospital, where he had been admitted for a broken pelvis, at 93. His death was announced at the start of a U.N. Security Council session as the council members stood in silence in his memory.

He was the first Arab to serve as U.N. chief, serving one five-year term that began in 1992. The 1994 massacre in Rwanda and the Yugoslav wars including the 1995 Serb slaughter, occurred during his tenure as U.N. chief.

Boutros-Ghali was the only U.N. chief to serve just one term; the United States vetoed his renewal.

In 1977, when Egypt’s foreign minister resigned in protest of Prime Minister Anwar Sadat’s visit to Jerusalem and the possibility of normalizing relations with Israel, Sadat named Boutros-Ghali acting foreign minister and minister of state for foreign affairs, though he had never held public office. In those positions, Boutros-Ghali played a pivotal role in negotiating the peace treaty signed between Israel and Egypt in March 1979, which also returned the Sinai Peninsula to Egypt, a key Sadat goal.

Israel’s government saw Boutros-Ghali as an ally in reaching the 1978 Camp David Accords. He was key in backing Sadat’s determination to forge the peace deal, even in the face of the hostility of other Arab nations.

Boutros-Ghali had argued unsuccessfully during the negotiations for a Palestinian state and a withdrawal of Israeli forces from the West Bank and Gaza Strip, according to The New York Times.

Boutros-Ghali was born into a prominent Egyptian Christian political family and worked in many academic positions before beginning his political life. He was married to a Jewish woman from Alexandria, Leia Nadler.

At U.N. headquarters in New York, Secretary-General Ban Ki-moon hailed his predecessor as a respected statesman who brought “formidable experience and intellectual power to the task of piloting the United Nations through one of the most tumultuous and challenging periods in its history.”

“As secretary-general, he presided over a dramatic rise in U.N. peacekeeping,” Ban said. “He also presided over a time when the world increasingly turned to the United Nations for solutions to its problems, in the immediate aftermath of the Cold War.”