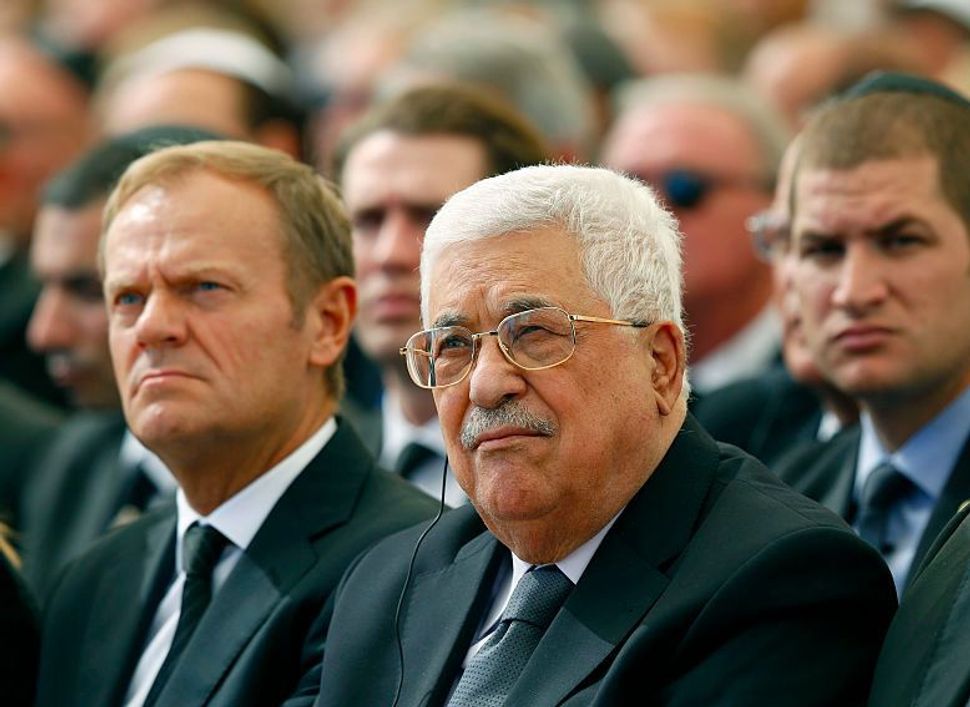 The presence of Palestinian Authority President Mahmoud Abbas at the funeral of Shimon Peres on Friday — the only Arab head of state to attend — has highlighted internal divisions within the Palestinian camp, evoking ambivalence from supporters and indignation from political foes.

Abbas was subjected to harsh criticism across much of the Arab world for his conciliatory message of condolence to the Peres family after his death. In the letter, published just hours after the former Israeli president passed away on Wednesday morning, Abbas said he was saddened by his death and described him as “a partner in forging the peace of the brave.”

But “despite our displeasure with the President’s attendance at Peres’ funeral, we know [he is just as patriotic as we are] and we don’t have all the information,” read the statement. “We know that many in the Israeli public have taken the rhetoric and policies of Abu Mazen to heart, declaring their solidarity with us and, in the future, pressuring their government,” it said, referring to Abbas’ nickname.

“We as Palestinians must realize that his participation sends a strong Palestinian message of peace to the world, especially at a time when the international community is monitoring its responsible position. [This message] could be one of the most important among participating countries,” Jaghoub said.

On Thursday, however, Jaghoub tweeted a cartoon of Peres standing next to the Grim Reaper as he holds a list of Peres’ crimes against the Arabs.

The same ambivalence could be found in another message posted on Fatah’s Facebook page Friday, in which it followed the initial criticism by claiming that Abbas’ participation in the funeral “blocked the way for the Netanyahu government to incite against the Palestinian Authority, as Israel tries to convince the world it is confronting opponents who only believe in violence and weapons.”

For its part, Hamas used Abbas’ avowed appreciation for Peres to portray him as a traitor to his people.

Nashat Aqtash, a communications professor at Birzeit University near Ramallah who advised Hamas in the 2006 elections, told Haaretz that Abbas’ attendance at the funeral “caused Palestinians to feel their president doesn’t respect their feelings.”

“Palestinians despise Peres more than they despise [former Israeli Prime Minister Ariel] Sharon,” he said. “Sharon may have starved the Palestinians, but Peres besieged them with his soft-spoken rhetoric. That’s worse.” In an official statement issued on Thursday, Hamas said that the PA leader’s expression of condolences was “an insult to the blood of the martyrs and the suffering of the Palestinian people.” The statement added that “the Palestinian people are pleased by the death of the criminal Shimon Peres.”

In a separate statement on Thursday, Hamas spokesman Sami Abu Zuhri called on Abbas to take back his decision to attend the funeral, claiming it would encourage other Arab leaders to follow suit. Hamas-affiliated news outlets on Facebook were enraged by Abbas’ attendance of the funeral and particularly his handshake with Netanyahu.

Gaza-based Shehab News Agency posted a screen capture of Abbas bowing his head during one of the speeches, along with the hashtag “taking part in condolences for Peres is treason.” That image has gone viral, with some claiming it depicts Abbas shedding a tear.

Quds News Network, another popular Facebook page, dedicated an article to popular reactions on the Palestinian street to Abbas’s decision to travel to Jerusalem. They were unfailingly negative.

“He was the number one propagator of the illusion of compromise which he marketed and sold us,” said Badran Jaber, a leader in the Popular Front for the Liberation of Palestine. “The result is the blood of martyrs, settlement activity, and land appropriation [by Israel] which all mark the current situation.”