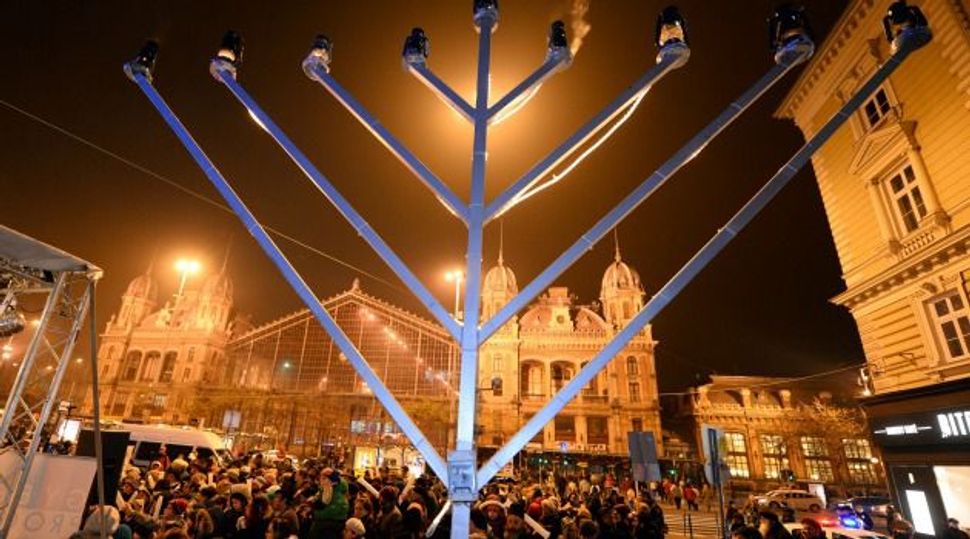 A crowd celebrates Hannukah in Nyugati square in Budapest. Image by Getty Images

(JTA) – A prominent rabbi from Budapest rejected an unusual Hanukkah greeting from the far-right Jobbik party, citing its alleged anti-Semitism.

“It’s a nice idea, but to show a genuine gesture toward Jews, Jobbik needs first to take some actions to distance itself from the wealth of evidence proving it is an anti-Semitic movement,” Koves wrote. He told JTA it was the first such “appearance of a gesture,” as he defined it, by Jobbik to the Jewish community.

Koves noted several anti-Semitic incidents involving Jobbik members, including a public vow made in 2014 by Vona himself to “immediately resign if somebody found out I had Jewish ancestry.” Last year he reaffirmed the statement in an interview.

Over the past year and a half, Koves said, “Jobbik has played a double game: Paying lip service to democratic values to pass off as a people’s party and reach power, while winking at its audience not to take this seriously.”

A Jobbik parliamentarian in 2012 called for registering Hungarian Jews as threats to national security, though he later said he meant to say Israelis. Last year, a Jobbik alderman from Budapest, Laszlo Benke, boasted over refusing to stand up at a memorial service for a rabbi. The party defended Benke’s actions.

But last year Jobbik messaging began shifting from xenophobic rhetoric to language with more positive messages, painting the party as not corrupt and in touch with the working class.

However, “they have not in the past attempted to appear as reaching out to the Jewish community, so this is the first such case,” Koves said.

“I would have been happy to accept their greeting, but I’m afraid at this point it can only be taken as an empty move that we cannot accept, which I am sure is designed to be used as propaganda,” Koves said. “If Jews accept their greeting, they can use it to show they’re not so bad. And if we reject, they can use it to show they tried but those nasty rabbis didn’t want to talk to them.”

To be taken seriously, the rabbi said, “Jobbik would have to reject their many, many anti-Semitic statements, replace the anti-Semites who run the party today.”