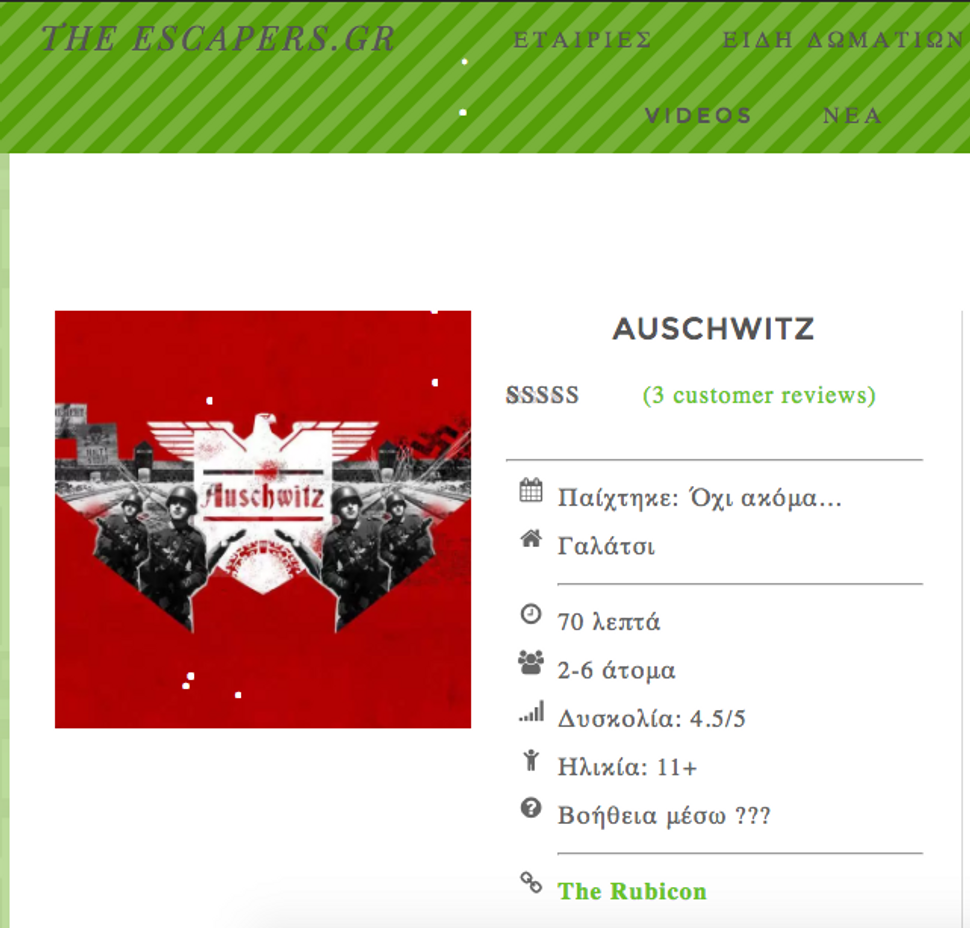 (JTA) — An entertainment company in Greece canceled a game in which players use clues to escape from a room themed around the Auschwitz-Birkenau death camp.

The Rubicon agency, which is located in the northern Athens suburb of Galatsi, in recent weeks advertised the Auschwitz “escape room” on social media. Jews and non-Jews complained it was disrespectful to Holocaust victims, the left-leaning news site Protagon reported Tuesday.

“In frozen Poland, the walls of the crematorium of the infamous Nazi concentration camp for prisoners, primarily of Jewish origin, still reek of burnt human flesh, they say,” a promotional text for the game read. “Take on the role of a prisoner still looking for signs of life from loved ones, dare to stay in the shadow of the historic crematorium, discover the big secret and escape before you, too, turn into ashes.”

Reached by Protagon, a spokesman of the firm responsible for the game said it had been scrapped and that the decision to create it did not take into account “that this could cause offense.”

Escape room games feature a space, often with a dramatic theme, in which a group of players is locked in until they find a way out based on a series of clues, riddles or puzzles.

A cached copy of the now-deleted page advertising the game on the website of Rubicon features three largely positive reviews from this month and the previous one.

“Today, a second visit to Rubicon to try Auschwitz. We went 3 people and once again it was very nice,” wrote one reviewer who used the handle Nospheratus. “The décor is quite good, with everything needed in order to put you in the mood.”

Approximately 77 percent of Greece’s Jewish population of 70,000 Jews was murdered in the Holocaust, mostly by German Nazis at Auschwitz.

Earlier this year, the Anne Frank Foundation criticized an escape room game in a Dutch town that was made to look like the small Amsterdam apartment where the teenage Jewish diarist hid with her family from the Netherlands’ Nazi occupiers during World War II until their capture and subsequent murder. Only her father, Otto, survived.