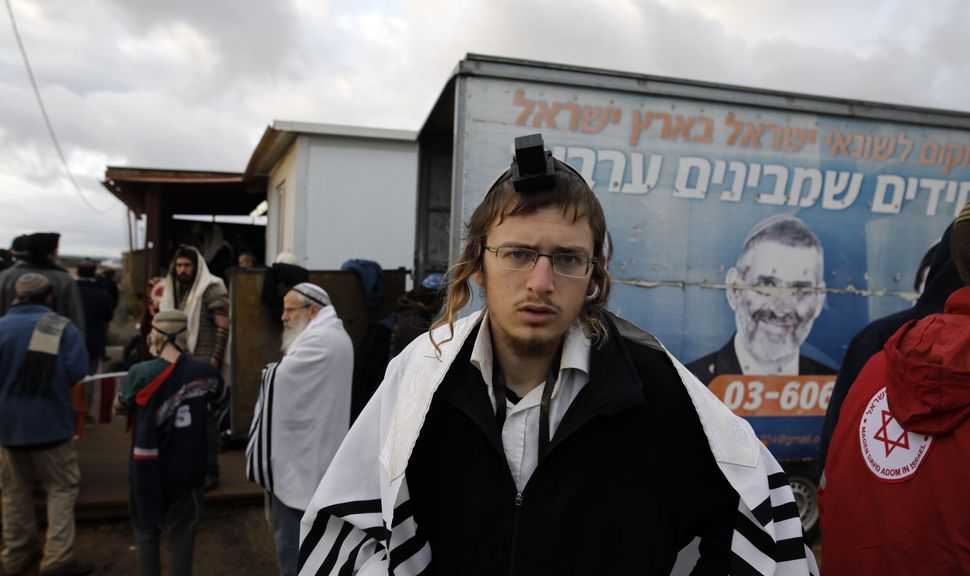 JERUSALEM (JTA) — Israeli police evacuated the synagogue at Amona in the West Bank, the last occupied building in the outpost.

The synagogue, in which up to 100 people, mostly teens, were holed up, was evacuated early on Thursday afternoon, several hours after the last of the 40 homes in the outpost were emptied of hundreds of protesters in an operation that began about 24 hours earlier.

It took the police and security forces nearly an hour to break through barricades on the synagogues doors and windows erected by the protesters, including corrugated metal sheets, wooden planks, piles of rocks, and stacks of the synagogue’s tables, chairs and moveable dividers.

Protesters threw smoke bombs and unidentified substances, as well as iron bars and rocks at the police as they worked to open the synagogue. Police said some of the substances were “hazardous chemicals.”

Eight police officers were injured during the evacuation of the synagogue. Thirty-two police have been injured in the last 24 hours.

Some of the protesters walked out of the synagogue on their own power, and most were carried out by police. One protester screamed at the police carrying him that they were acting “just like the Germans did” during the Holocaust. The protesters were pushed on to buses waiting to take them away. There is no timetable announced for the demolition of the buildings.

Hundreds of police entered Amona on Wednesday morning to carry out the court-ordered evacuation.

In 2006, a confrontation between settlers and police forces attempting to evacuate them turned violent, leaving many injured. The February demolition was postponed from Dec. 25 to give the state time to provide new housing for the residents.

Israel’s Supreme Court on Wednesday canceled a December agreement by the government and the Amona residents to move their community to land adjacent to the evacuated outpost after Palestinians came forward claiming ownership of the land.

The Supreme Court had ruled previously that Amona is an illegal settlement built on appropriated Palestinian land. At least three demolition orders had been issued since 1997.