Jews And Muslims Hold Pro-Immigrant ‘Seder In The Streets’ 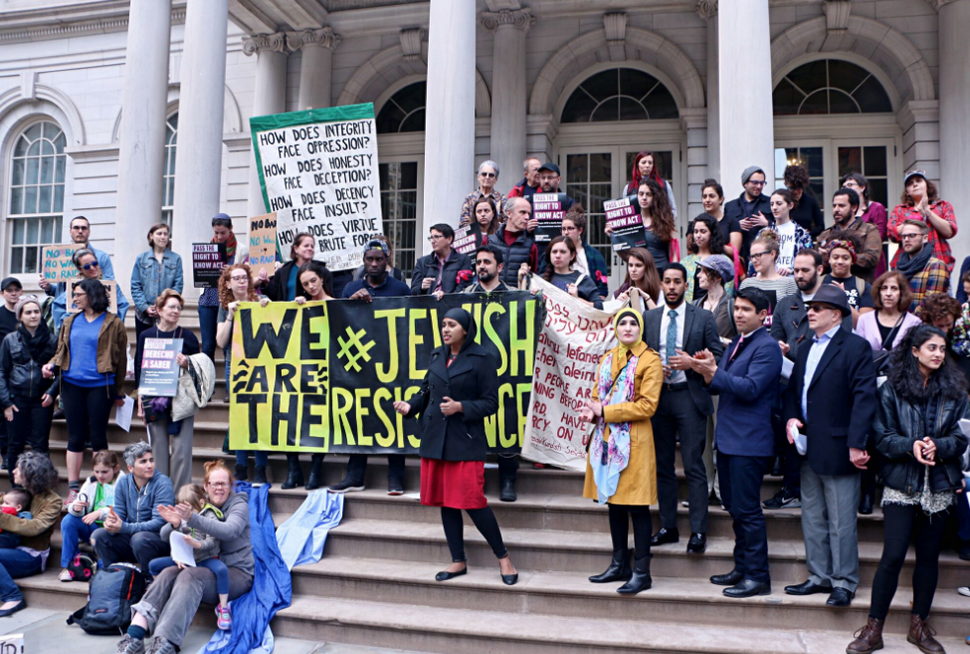 Hundreds of Jewish and Muslim activists converged on the steps of New York’s City Hall on Wednesday for a Passover “seder in the streets,” pushing Mayor Bill de Blasio and other local authorities to make concrete steps to protect immigrant and people of color communities from President Trump’s policies.

Key items on the activists’ program were promoting the Right to Know Act – a bill that would force New York Police Department officers to clearly identify themselves to the public and limit their power to make stops and searches – and urging the mayor to further limit cooperation with federal immigration authorities, which de Blasio has already vowed to do.

“I am a first generation American of Iranian Jewish parents, and my parents felt blessed for the second chance they were given when they came to America as refugees and for the opportunities this country would extend to me and my siblings,” Talia Kamran, a member of JFREJ who was arrested, said in a press release. “All immigrants, documented or undocumented, and all people deserve that same chance, to feel like the place that they live is their sanctuary.”

Added Matalon, defending Syrian refugees and denouncing the White House’s Muslim ban: “My family is originally from Aleppo, which is now devastated from the war. They lived in harmony with other Arab people — Christians, Muslims, and Jews. Of course there were issues, and it wasn’t always easy, but by and large, there was no reason to look at each other with the suspicion, fear, and hatred that many do today.”

He continued, “My family always taught me to respect Arab Muslim and Christian people. And as an Arab Jew myself, I believe that an insult on Arabs is an insult to us all. If history has taught us anything, it’s that we can, should, and have been there for each other. This time is no different.”

Jews And Muslims Hold Pro-Immigrant ‘Seder In The Streets’