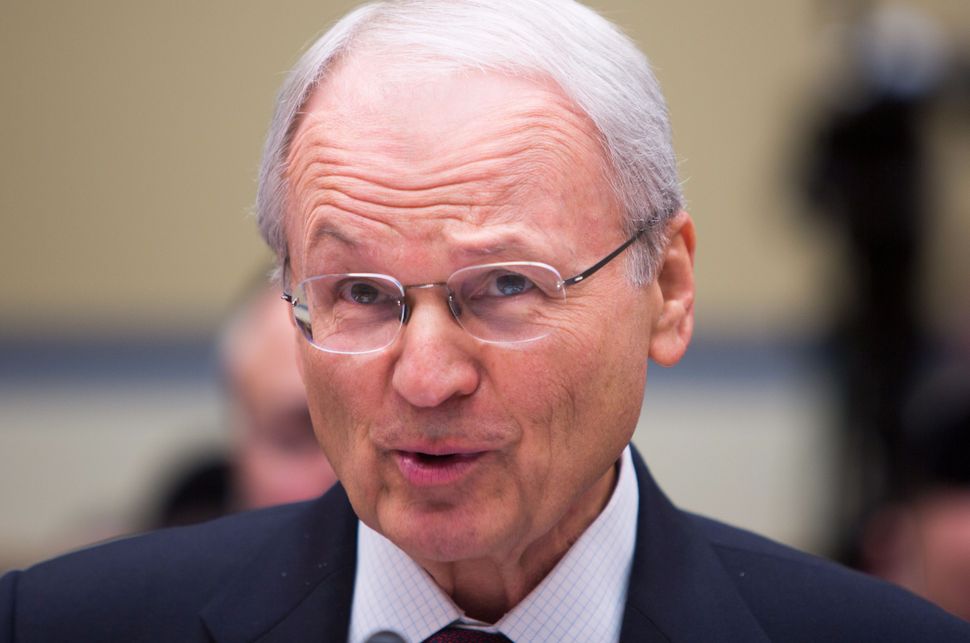 Zionist Organization of America president Morton Klein has dedicated his career to supporting the state of Israel. In that role, he has been caustically critical of the terrorist group Hamas and one of its biggest sponsors, the state of Qatar. Yet recently, Klein’s relationship to the Gulf kingdom has grown more complex.

First, he visited it in January as part of its outreach campaign to the American Jewish community. He also around that time accepted two donations to the ZOA of $50,000 each that were later revealed to have come from an undeclared Qatari lobbyist. Then, Klein again denounced the country and says he didn’t know the money was from there; wouldn’t have accepted it if he had known; and returned it to the man who gave it to him.

But Klein’s Qatar complications won’t go away: A lawsuit filed Monday accuses him of having had several phone and text conversations with an alleged undeclared Qatari agent, including on June 6, the day that Klein and other prominent Qatar-tied Jewish figures broke with the kingdom.

It is the latest turn in the long-running saga of Qatar’s outreach to American Jews, controversial for the kingdom’s ties to Hamas, a sworn enemy of Israel. During the first year of the Trump administration, Klein’s ZOA emerged as the Jewish organization with the most access to some of the president’s senior advisors, including Steve Bannon and U.S. Ambassador to Israel David Friedman. Casino mogul Sheldon Adelson, one of the Republican Party’s biggest donors, is also the ZOA’s largest backer.

Klein told the Forward he had “no idea” whether the alleged agent, former United Nations Under-Secretary General Jamal Benomar, was in fact working for the Qataris without properly disclosing it with the Justice Department. He admitted that he had spoken with Benomar “a number of times” but declined to disclose details of their conversations. Klein entertained Qatar’s advances, he has said, because Qatar was holding out the possibility of improving its relationship with Israel.

The lawsuit, filed by former Republican National Committee deputy finance chair Elliott Broidy, claimed that Benomar worked on behalf of Qatar to help hack computers belonging to Broidy and his company, and disseminate information found there to reporters.

It reveals more about the rivalry between Qatar and the neighboring United Arab Emirates, elements of which are now being litigated in a number of American courts and feature in special counsel Robert Mueller’s investigation into foreign interference in the 2016 presidential election.

Broidy’s filing claims that Benomar made frequent calls and texts to Klein during the time that the ZOA was warming to Qatar. Benomar allegedly spoke by phone with Klein two weeks after Klein returned from his Janaury visit to Qatar – which the ZOA president said at the time was part of an effort to stop Qatar’s support of Hamas and to squash a documentary about the Israel lobby by the Qatar-controlled TV network Al Jazeera.

The call was also two days after kosher restaurateur-cum-lobbyist Joey Allaham says he facilitated a second payment of $50,000 to the Jewish advocacy agency. Allaham later filed paperwork with the Department of Justice disclosing that he had worked as an agent of Qatar, disclosing those payments as having been “in furtherance of or in connections with [his] activities” for the country.

According to the filing, Klein also called Benomar on June 6, the day that the ZOA, as well as Allaham and registered Qatar lobbyist Nick Muzin, publicly broke with the Gulf nation.

Broidy’s filing also said that Benomar had conducted phone and text correspondence with Dershowitz before his sponsored trip to Qatar in February.

It is unclear from the filing on what basis Broidy’s lawyers are claiming that Benomar is in fact a Qatari agent, though it notes that Benomar met frequently with Qatari officials as part of his U.N. peacekeeping efforts in Yemen. It is also unclear how Broidy’s team acquired Benomar’s call logs, since they have been unable to serve Benomar with a subpoena and Klein is not a defendant in Broidy’s lawsuit against Muzin, the Qatari government, and others he alleges are behind his hackings.

Klein said he didn’t know how Broidy’s team had acquired information about his calls and texts. Broidy’s lawyer did not respond to a request for comment.

Multiple news outlets have used the hacked material to report embarrassing and legally questionable actions on Broidy’s part. Recent reports revealed that he had worked with Trump lawyer Michael Cohen to pay hush money to a Playboy Playmate that he had impregnated; that he had sought $75 million from figures close to the Malaysian government to use his influence in the White House to end a U.S. Department of Justice probe, and that he was paid millions to work with an advisor to the royal family of the United Arab Emirates — Qatar’s regional rival — to move American policy in a pro-U.A.E., anti-Qatar direction. That royal advisor, George Nader, is now reportedly cooperating with special prosecutor Robert Mueller’s probe into foreign influence in the 2016 presidential election. Broidy was also a client of Rick Gates, who pled guilty to financial fraud and lying to investigators and is also cooperating with Mueller.