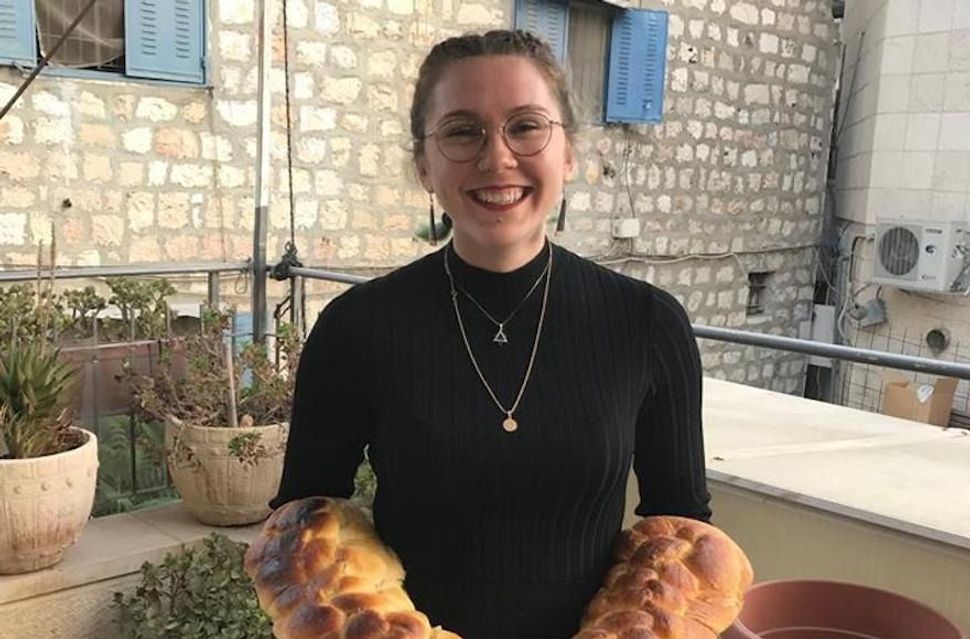 (JTA) — Another Jewish-American left-wing activist was detained at the Israeli border and threatened with deportation before being allowed to enter the country.

Julie Weinberg-Connors, 23, arrived in the country on Wednesday to begin a year of study at the Pardes Institute of Jewish Studies, a nondenominational yeshiva in Jerusalem. Weinberg-Connors was detained at Ben Gurion Airport upon landing and was questioned by Interior Ministry officials before being allowed to enter the country. The whole experience took more than three hours.

Weinberg-Connors is in the process of immigrating to Israel, or making aliyah, and will be living in the country on an A-1 visa, which is intended to be a stepping-stone to immigration.

“They said, ‘We’re re-booking your flight and putting you on a new flight back to the U.S.,’” Weinberg-Connors told JTA on Wednesday. “They put me in a holding area.”

“It made me really sad,” she said later. “I love this land very deeply and it’s very important to me that it is a place that is a safe home for the people who call it home. That we have a government now that’s trying to deny people entry based on their political beliefs is scary.”

Weinberg-Connors is the latest Jewish-American left-wing activist to be detained by Israel at the border and questioned over their politics before being allowed into the country. Earlier this year, Israeli officials detained prominent journalist Peter Beinart, author Moriel Rothman-Zecher, and activists Simone Zimmerman and Abby Kirschbaum.

In March 2017, the Knesset passed a law that denies entry to foreigners who support the Boycott, Divestment and Sanctions movement, or BDS. But some of the detained activists are not supporters of BDS.

Weinberg-Connors was detained after the Interior Ministry learned that she had visited Area A in the West Bank, which is under full Palestinian civil and security control. American citizens are allowed to visit Area A; Jewish Israelis are not.

“When I said Khan al-Ahmar, the man said, ‘You can’t enter into Israel,’” Weinberg-Connors said, referring to an official questioning her. “I said, ‘Why?’ and he said, ‘Because you’re here to make trouble.’”

After being threatened with deportation due to the Khan al-Amar visit, Weinberg-Connors spoke to her lawyer and eventually was asked to sign a document pledging not to visit Area A while in Israel without receiving a permit. After signing the document, Weinberg-Connors was allowed to enter the country, according to the Interior Ministry.

“It was clear from [Weinberg-Connors’] interrogation that it was her intention to go to the territory of the Palestinian Authority,” a spokesperson for the Interior Ministry told JTA in a statement Wednesday. “Investigations conducted with relevant security officials led to an unequivocal recommendation not to allow her entry. However, after pledging to obtain a permit before going to [Palestinian] Authority territory, her entry was permitted.”

Weinberg-Connors is from Boston and is a 2017 graduate of Beloit College, where she majored in critical identity studies and minored in religious studies. She studied abroad at Tel Aviv University, and has been involved with Jewish organizations such as Achvat Amim, a Palestinian-Israeli solidarity group; Encounter Programs, which leads listening tours to Palestinian areas of the West Bank for Jewish Americans; and Adamah, a Jewish-American farm that has a fellowship for young adults.

“I definitely want to still make aliyah,” she said. “I really care about this place and making it into the place I think it should be for the Jewish people and all people is really important to me. I do worry about my ability to stay here if I’m not a citizen.”