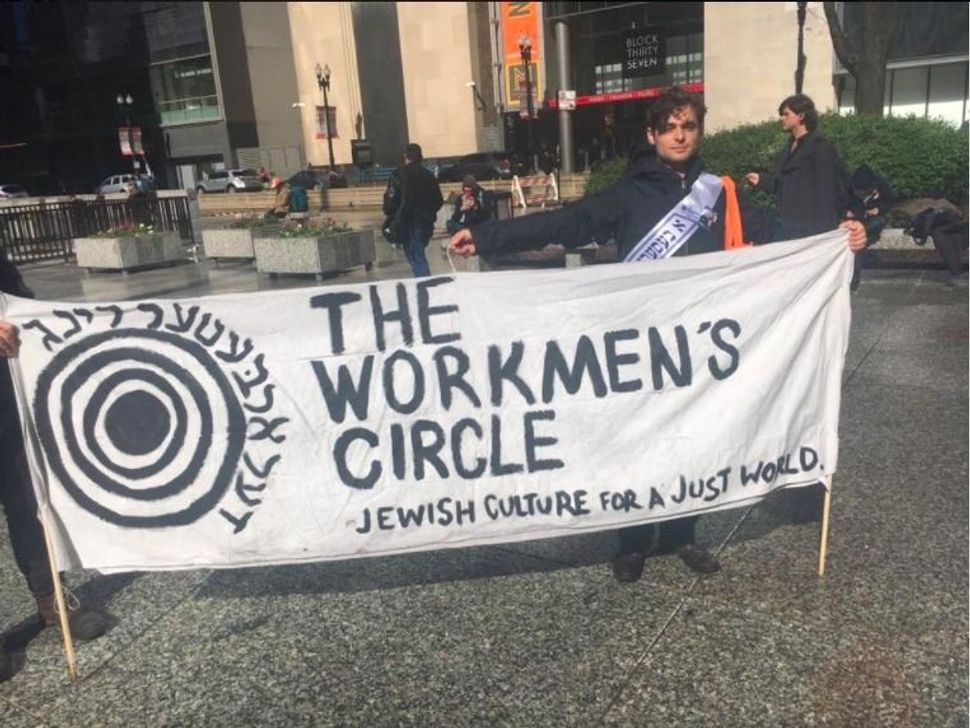 Image by Courtesy of the Workmen’s Circle

(JTA) — Boston’s  Jewish Community Relations Council passed a resolution saying its members cannot partner with Jewish groups that are anti-Zionist, setting up a showdown with one of its members, the local branch of the Workmen’s Circle.

The resolution, approved on Thursday evening, states that working with Jewish anti-Zionist groups, specifically by co-sponsoring events or signing statements organized or co-organized by such organizations, “could be grounds for removal from the JCRC.”

The vote follows discussions that started in July, when the member group Boston Workmen’s Circle signed a statement by Jewish Voice for Peace, an organization that supports the Boycott, Divestment and Sanctions movement against Israel.

The council — made up of member groups, community representatives, as well as the organization’s officers, board of directors and past presidents — passed the resolution with 62 members voting in favor, 13 voting against and 8 abstaining.

As of now, the Boston Workmen’s Circle, a group with socialist roots that promotes Jewish culture and Yiddish, is still a member of the umbrella organization, JCRC Executive Director Jeremy Burton told JTA on Friday.

The Boston Workmen’s Circle slammed the resolution in a statement by its board of directors and said it would be holding a meeting for its “members to decide as a community how we choose to proceed from here.”

“This motion conflicts with traditional Jewish values that respect diversity of opinion and encourage robust, honest and inclusive dialogue,” the group said. “It sets a dangerous precedent of condemnation by association, by placing a political litmus test on Council membership based on partnerships.”

JTA asked Burton whether there was a way for the Boston Workmen’s Circle to remain a part of the JCRC if it stood behind its decision to sign  the Jewish Voice for Peace letter and continued signing such statements.

The Boston Workmen’s Circle said it was worried that the vote could alienate members of the Jewish community.

“We are particularly concerned about Jews who have long been marginalized within mainstream community and with Jews who are feeling increasingly isolated from Jewish institutions because of red lines like the one approved last night,” its board said in in a statement.

Burton said that his organizations was not trying to create divisions in the Jewish community.

“[W]e do not seek division, but there are divisions in our community that are unfortunate and sometimes it is necessary to take a stand on those divisions,” he said.

“This clarifies what we’re talking about when we talk about BDS in the Jewish community.” Burton said.

BDS is a red line for nearly all major Jewish groups, although organizations that have rejected BDS but are critical of Israeli policies have also been subjected to scrutiny. In 2014, the Conference of Presidents of Major American Jewish Organizations blocked the liberal Mideast policy group J Street from becoming a member, despite a number of leading Jewish groups coming out in favor of J Street’s membership.

While J Street opposes BDS and considers itself pro-Israel, opponents said its frequent criticism of the current Israeli government and public disagreements with other Jewish groups were disqualifying. JVP, by contrast, embraces BDS and also states on its web site that “We unequivocally oppose Zionism.”

Burton said J Street’s membership had also been debated eight years ago at the JCRC, but that the group was ultimately allowed to remain part of the coalition.