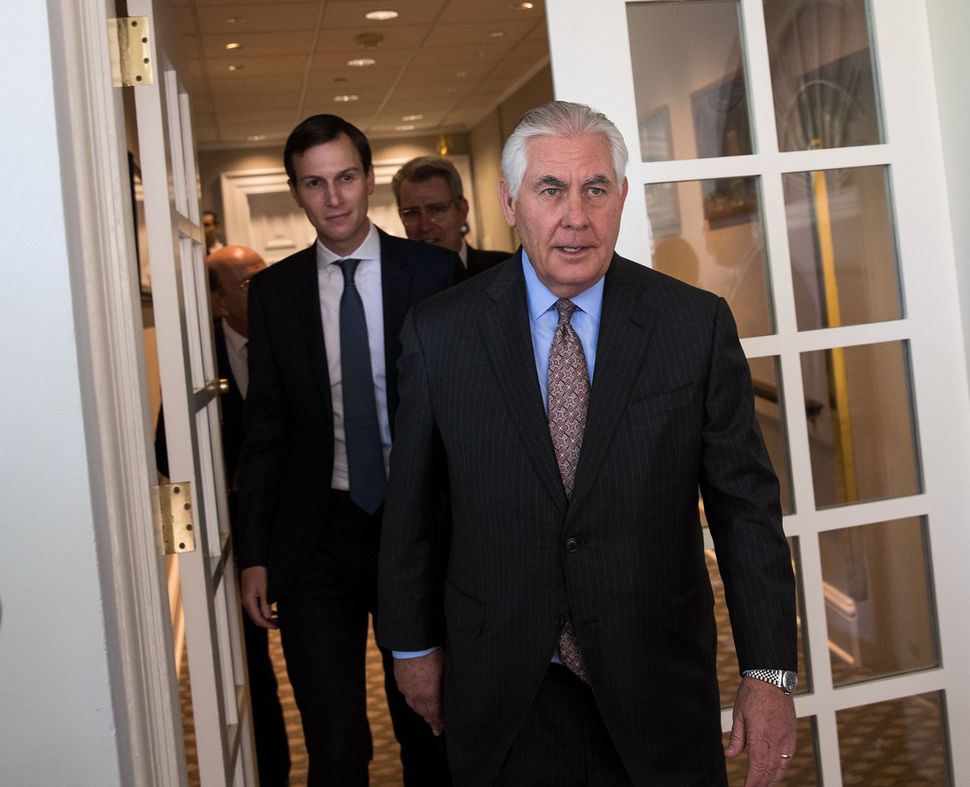 WASHINGTON (Reuters) – In one of the most awkward moments of his time as U.S. secretary of state, Rex Tillerson realized his Mexican counterpart was in Washington only when he walked into a restaurant and found him dining with President Donald Trump’s son-in-law and senior adviser, Jared Kushner.

On another occasion, neither Tillerson nor Jim Mattis, who was then secretary of defense, knew Saudi Arabia and the United Arab Emirates planned to blockade their regional rival Qatar even though Kushner and another Trump adviser, Steve Bannon, had been told about it at a secret dinner with their governments.

Tillerson recounted the embarrassing incidents in a seven-hour closed-door interview with leaders of the House of Representatives’ Foreign Affairs Committee last month.

Trump fired Tillerson in March 2018 after months of friction and on Twitter called him lazy and “dumb as a rock.”

Tillerson’s testimony, a transcript of which was seen by Reuters House of Representatives’ Foreign Affairs Committee, shows how Tillerson’s 13-month tenure as secretary of state, one of the shortest ever, was undermined by public disagreements with Trump and a sense that the former ExxonMobil chief executive was being excluded from key discussions.

Tillerson said Trump is undisciplined and does not like to read and that he had to make briefings short and simple.

“I had to adapt to the fact that it wasn’t going to be useful to give him something and say this is, you know, this is an article worth reading,” Tillerson said.

A recurring theme in the interview was Tillerson’s frustration with Kushner conducting his own diplomacy from the White House, at times without the knowledge of Tillerson or Mattis.

Tillerson said he had just arrived for dinner at the Washington restaurant when the owner shared the unexpected news that Mexico’s then-foreign minister, Luis Videgaray, was at a table near the back in case he wanted to say hello.

Tillerson walked over and found Videgaray with Kushner.

“I could see the color go out of the face of the foreign secretary of Mexico as I very – I smiled big and I said: ‘Welcome to Washington,’” Tillerson told the congressional panel.

“And I said: ‘I don’t want to interrupt what y’all are doing.’ I said: ‘Give me a call next time you’re coming to town.’ And I left it at that,” Tillerson said.

‘It Makes Me Angry’

The Foreign Affairs Committee’s new chairman, Democratic Representative Eliot Engel, asked Tillerson to talk to the panel as part of its oversight of foreign policy, after Democrats won control of the House in November 2018 elections.

In the meeting, Tillerson said there had never been discussion of Kushner’s or Trump’s business dealings in relation to foreign policy. He emphasized that Trump never asked him to break the law.

Tillerson said he and Mattis learned about the 2017 blockade of Qatar during a joint visit to Australia, which left them scrambling to determine the extent of the crisis and safety of U.S. assets in the Gulf.

He appeared surprised when told during the interview that the blockade was discussed at a private dinner by Kushner, Bannon and leaders of Saudi Arabia and UAE.

“It makes me angry,” Tillerson said, “because I didn’t have a say. The State Department’s views were never expressed.”

He said he raised the issue of such trips with Kushner, who said he would “try to do better.” However, Tillerson said not much changed and that it made his job more difficult.

Trump’s presidency has been dogged by accusations, which he denies, that his campaign colluded with Russia in 2016 as Moscow worked to boost the Republican’s chances of winning the White House.

Tillerson described how Russian President Vladimir Putin arrived well prepared for a key meeting in Hamburg in July 2017, but the U.S. side had expected a “fairly short” session at which the two presidents would get acquainted.

The meeting lasted hours, with no one in the room taking notes.

Trump said afterward he believed Putin when the Russian leader denied Moscow had interfered in the election, drawing criticism because U.S. intelligence agencies had determined the opposite.