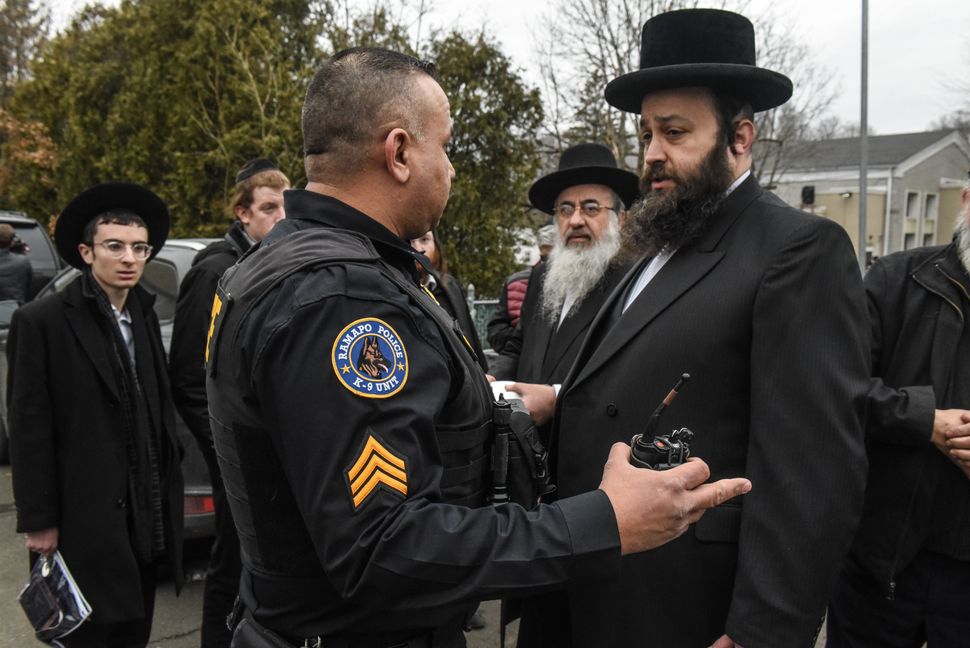 A member of the Ramapo police stands guard in front of the house of Rabbi Chaim Rottenberg on December 29, 2019 in Monsey, New York. Image by Getty Images

The family of Grafton Thomas, the man accused of stabbing five Hasidic Jews at a Hanukkah party in Monsey, N.Y., says he has no link to hate groups and blames his alleged actions on mental illness. The FBI argues that Thomas’s journal entries and search history show a man preoccupied with Jewish control and anti-Semitic theories.

“Grafton Thomas has a long history of mental illness and hospitalizations,” the family said in a statement released by Thomas’s lawyer Michael Sussman to the Times-Herald Record. “He has no history of like violent acts and no convictions for any crime. He has no known history of anti-Semitism and was raised in a home which embraced and respected all religions and races. He is not a member of any hate groups.”

Thomas grew up in the heavily Jewish New York City neighborhood of Crown Heights, the center of the global Lubavitcher Hasidic movement, an aunt of his told the Associated Press. He had lived peacefully there, she said, but disappeared after stopping his medication.

But on Monday, Thomas was charged with a federal hate crime. Following a search of Thomas’s home, federal agents discovered Thomas’s journals, which a criminal complaint obtained by NPR claims included “anti-Semitic sentiments.” News12 reporter Jonathan Gordon posted screenshots of the complaint, which quotes the entries.

An FBI search of Grafton Thomas’ phone and journals reveals anti-semitic rhetoric. Thomas is accused of stabbing five Jews in #Monsey who were celebrating the seventh night of Chanukah. @News12WC @News12HV pic.twitter.com/hkadDDKhHx

In his journals, Thomas appears to question why people mourn for anti-Semitism “when there is Semitic genocide.” Thomas also references Adolf Hitler on a page that features a star of David and a swastika. He also wrote about “Hebrew Israelites” and “‘ebinoid’ Israelites.” The man and woman who allegedly killed three people, two of them Orthodox Jews, inside a kosher supermarket in Jersey City were affiliated with the Black Hebrew Israelites, a movement that has anti-Semitic and black nationalist offshoots.

Looking at Thomas’s phone for his search history, investigators found searches including “Why did Hitler hate Jews,” “prominent companies founded by Jews in America” and several instances where he searched for nearby synagogues (“Zionist Temples.”)

Research shows that when mentally ill people commit crimes, their symptoms are only attributable as a cause in 10% to 15% of cases.

On Sunday, the Thomas family’s pastor, Rev. Wendy Paige told the New York Post that Thomas, 38, had suffered from mental illness for over 20 years, took medicine and had been in hospitals multiple times to seek treatment.

“Grafton is not a terrorist,” Paige told the Post, apparently responding to Governor Andrew Cuomo’s assertion that the attack was “domestic terrorism.”

The Associated Press reported that Thomas had a previous criminal history, including an arrest for assaulting a police horse, an official briefed on the investigation who spoke to the AP on condition of anonymity. A lawyer representing Thomas at the arraignment said his client had no convictions.

The stabbing in Monsey follows a long string of recent anti-Semitic incidents in New York. An official briefed on the investigation told AP that authorities do not believe Thomas is involved in these attacks.