That ‘Invented People’? The Idea Is Invented 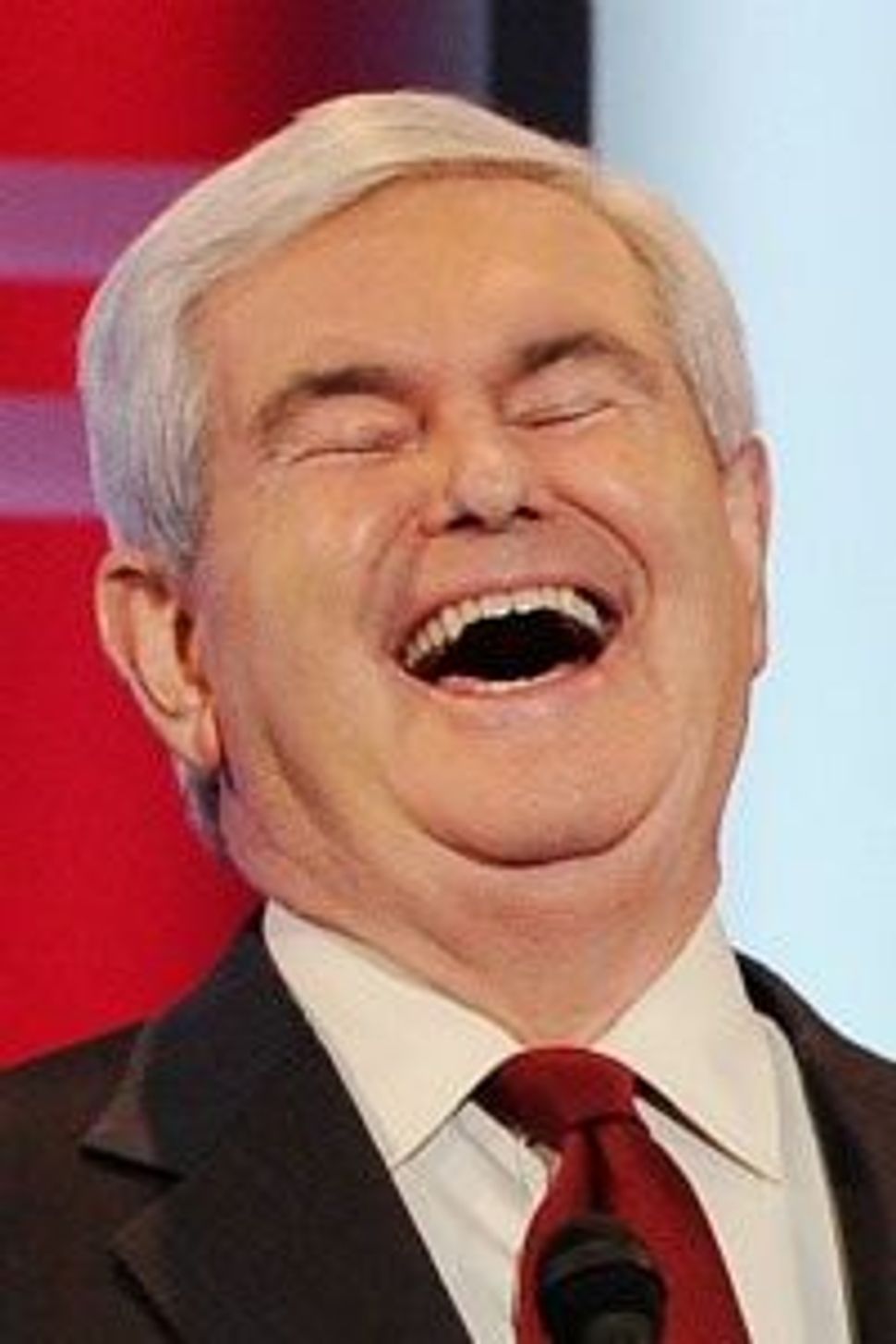 Both Mitt Romney and Ron Paul condemned the remark as, in Paul’s words, “just stirrin’ up trouble.” Interestingly, though, both agreed that Gingrich’s point was historically accurate. No one on stage disagreed.

Responding to the charge of troublemaking, Newt doubled down, adding some historical detail to show that the “Palestinian claim to a right of return is based on a historically false story.”

Somebody ought to have the courage to go all the way back to the 1921 League of Nations mandate for a Jewish homeland, point out the context in which Israel came into existence, and ‘Palestinian’ did not become a common term until after 1977.

Let’s take the professor at his word and go back to the League of Nations mandate. What do we find? First, that it’s from 1922, not 1921. Second, it’s not a “mandate for a Jewish homeland.” It is titled “Mandate for Palestine.” The difference is critical. The purpose of a mandate, as defined in the 1919 Covenant of the League of Nations, Article 22, was to govern territories formerly controlled by other states (mainly meaning the losers in World War I) and prepare them for independence. One of the conditions of the Palestine mandate was to help prepare a Jewish national home in Palestine (nothing about Palestine as a whole being a Jewish home). The mandate defines “all the inhabitants of Palestine, irrespective of race and religion,” as “citizens” (the mandate’s language) of Palestine, which in turn is defined in the league covenant as a state-in-the-making. In other words, from August 12, 1922, Palestine was a political entity in international law, not just a geographic one, and its inhabitants were legally defined — and universally described—as “Palestinians.” Some were known as Palestinian Jews, some as Palestinian Arabs. The term was in general use long before 1977.

If that’s called an “invented people,” then the Palestinians were invented about 50 years later than the Germans, who became citizens of a no less artificially created entity called Germany in 1871. When exactly was the cut-off date?

Jumping a bit further forward, the next document to define status of the Palestinian Arabs in international law is United Nations General Assembly Resolution 181, the famous Partition Plan, which formally declared an end to the mandate and authorized the creation of not one but two Palestinian states, one Arab, the other Jewish. From the date that the mandate ended, May 15, 1948, the Jewish citizens of Palestine were deemed citizens of the Jewish state successor to the mandate, and the Arab citizens became citizens of the Arab successor state.

As we know, the Arab authorities — both the local bodies in Palestine and the neighboring Arab states — rejected the partition and attempted (unsuccessfully) to abort the creation of the Jewish state. The war ended not in a peace agreement but in cease-fires and armistice agreements between Israel and Egypt, Jordan and Syria. This left the Palestinians who didn’t become Israelis as citizens of a mandate territory that no longer existed and of a state that they themselves didn’t recognize and helped to abort — in practical terms, stateless. That was the situation until November 14, 1988, when the Palestine National Council, the governing council of the Palestine Liberation Organization, voted 253-to-46 (with 10 absentions) to approve the Algiers Declaration, formally accepting Resolution 181 and implicitly embracing the 1949 armistice lines as the basis for their future borders. From that moment, the Palestinian Arabs accepted their legal definition as citizens of a Palestinian Arab state meant to exist alongside the Jewish state.

Going “all the way back” to the documents is useful for several reasons. First, since the U.N. partition resolution explicitly created a Jewish and an Arab state in Palestine, the PLO’s formal ratification of the resolution constitutes explicit, unambiguous recognition of Israel as a Jewish state. All the noise in the last year or so about Israel demanding such recognition and the PLO refusing it is nothing more than that—noise.

Second, reading the mandate text reminds us that the Jewish people has a promise from the international community, enshrined in international law, of a national home in Palestine, but no promise of a national home consisting of Palestine. It’s all the rage in some not-one-inch circles to cite the League of Nations covenant and the Palestine mandate as “promising” all of Palestine to the Jews as a homeland, giving us legal title to the whole thing under international law. According to the not-one-inchniks, the promise was partly broken when the British broke off the eastern part of Palestine in September 1922 and created what became the Emirate (later the Hashemite Kingdom) of Transjordan. Note that the surgery was preapproved in Article 25 of the mandate, meaning there was never a promise that was later modified or rescinded. In any case, the accession of Transjordan didn’t remove anything that had been promised to the Jewish people, since the mandate only promised a national home in Palestine.

Third, note that Article 4 of the Mandate directs the British mandatory government to recognize an “appropriate Jewish agency” as a “public body for the purpose of advising and co-operating with the Administration of Palestine in such economic, social and other matters as may affect the establishment of the Jewish national home and the interests of the Jewish population in Palestine.” It goes on to say that “The Zionist Organisation … shall be recognised as such agency.” Article 6 then gives the Agency responsibility for Jewish immigration and land settlement. This is important because, in the interests of enhancing donors’ enthusiasm, a fiction has been created in the Jewish philanthropic world that the Jewish Agency was created in 1929 as a partnership between the Zionists and the broader community. That was the year that Chaim Weizmann invited American Jewish Committee president Louis Marshall of the American Jewish Committee to join an “expanded executive” of the agency, essentially a Potemkin governing board aimed at winning greater cooperation from the broader, “non-Zionist” (read “affluent”) Jewish community in the Zionist enterprise. Nowadays, donors wonder how the World Zionist Organization ever got control of “our” Jewish Agency. Answer: the Agency was from the beginning just another name for the Zionist organization (or, as it worked out, its Jerusalem operations office).

Note, too, that Article 11 of the mandate authorizes the Jewish Agency “to construct or operate, upon fair and equitable terms, any public works, services and utilities, and to develop any of the natural resources of the country.” Ever wonder who let the Jewish Agency get its hands into owning and operating major sectors of the Israeli economy? Well, it was enshrined in international law by the League of Nations in the same document that promised the Jews a homeland. Essentially, the legal basis for Jewish nationhood is also the legal basis for Israeli socialism. Imagine that.

That ‘Invented People’? The Idea Is Invented