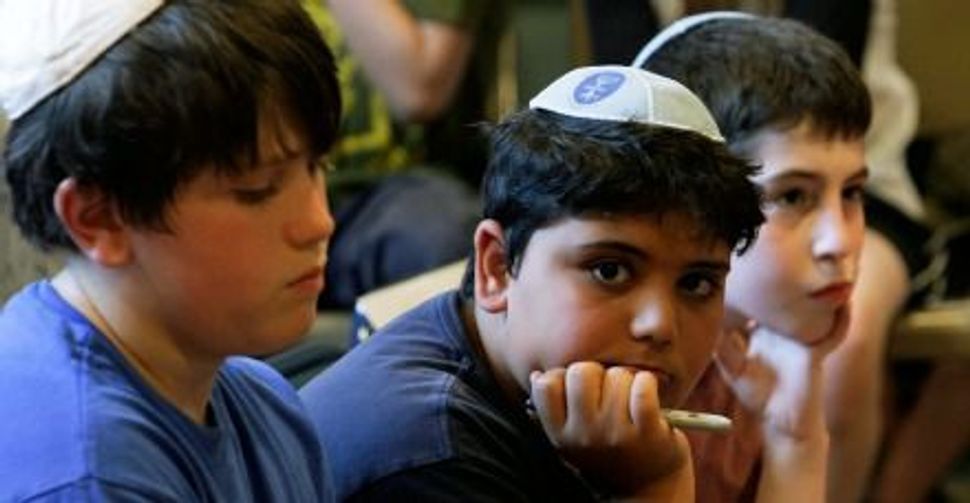 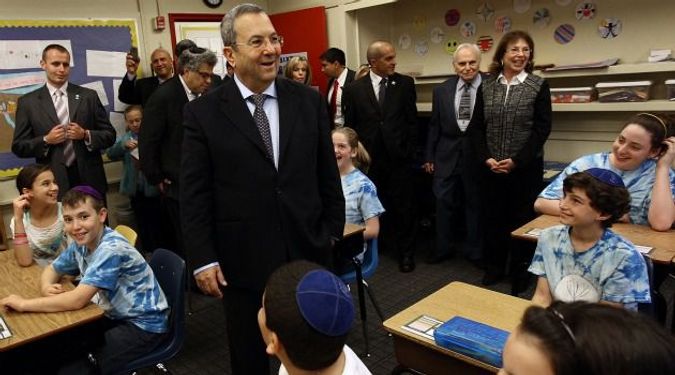 Declining Numbers: Israeli Defense Minister Ehud Barak visits the Jewish Primary Day School of the Nation?s Capital, which, bucking a trend, is seeing its numbers grow. Despite a massive push, enrollment is down at Jewish schools, except for those serving the ultra-Orthodox. Image by getty images

The month of December brought some bad news for Jewish day school advocates. According to the Avi Chai Foundation, which tracks these things, day school enrollment saw a “modest decline” of about 1.4% in the 2011-12 school year, compared with the year before.

The numbers offer several useful insights. Perhaps the most useful, though hardly the insight the authors intended, is how easily numbers can mislead. Comparing this year with last, we find a slight drop in day school enrollment, presumably due to the economy. When we dig a little deeper, though, we’ll find a significant decline in non-Orthodox enrollment, while overall enrollment soars due to an ongoing Orthodox baby boom.

The main reason, several Schechter officials told me, is an exodus of families and whole schools to a network of non-denominational community schools with fewer religious rules. Community-school enrollment rose from 14,849 in 75 schools in 1998 to 19,417 in 91 schools this year. A smaller number may have left for Hebrew charter schools in New York and South Florida.

We’ll also find an explosive growth in ultra-Orthodox or Haredi school enrollment, including both Hasidic and non-Hasidic (that is, misnaged or “yeshivish” black hat) schools, reflecting high birthrates. Modern Orthodox schools, by contrast, are essentially holding their own.

Avi Chai compiles its numbers by a census — literally contacting every day school in America and asking for numbers, grade by grade. It’s probably the most accurate source of American Jewish demographic information, though limited in range. However, the full census is only conducted every five years. The last one was in 2008.

The figures released this past December are based on a partial census that’s conducted annually between full headcounts. The partial tally includes only the five most modern school groupings: the four mentioned above (two Modern Orthodox, two non-Orthodox) plus the much smaller Reform day schools (total enrollment 4,300). Among those not included are the two Haredi groupings, Hasidic and Yeshivish, which account for more than half of all America’s Jewish day school students.

Nationwide, day school enrollment increased 24% in the decade between 1998 and 2008, jumping from 184,333 students to 228,174. Experts and community leaders often cite this increase to suggest growing acceptance of day schooling.

Breaking it down by denomination, that’s not so clear. Of the 43,841 new enrollments over the decade, 35,238 were in Haredi schools, virtually all due to birthrate. Another 4,858 new enrollments were in Chabad schools, which are counted separately for complicated reasons. The non-Orthodox streams — Conservative, Reform and Community schools, on which continuity mavens mostly pin their hopes — saw their combined enrollment grow by only 1,733.

The other major category, Modern and Centrist Orthodox, has remained virtually unchanged since 1998 at a combined 48,000, give or take a few hundred. Here again, however, numbers can deceive. Those two streams reported non-Orthodox student populations in 1998 of 20% and 10%, respectively. Their flat totals probably reflect declining non-Orthodox enrollment matched by a growing Orthodox population.

Today’s total enrollment nationwide can therefore be estimated at roughly 242,000. About 14% are in non-Orthodox schools, 20% Modern Orthodox and 60% Haredi.

In a category by themselves are Chabad schools. These are an odd mix; some serve the traditional population of Lubavitch Hasidim in New York, while others around the country are administered by Chabad rabbis but serve mostly non-Orthodox families. In 1998, Chabad enrollment totaled 7,438, of whom 30% or 2,232 were estimated to be non-Orthodox and 5,206 Hasidic. In 2008, total enrollment was 12,296. Non-Orthodox Chabad pupils outside New York probably represent about 45% of that, leaving a Lubavitch Hasidic school population of about 6,800.

The biggest Hasidic sect is not Chabad, but Satmar. In 1998, Satmar school enrollment totaled 17,500, roughly equal to Schechter. It accounted for 45% of the total Hasidic school population of 39,000, and nearly 10% of all day school enrollment nationwide. Satmar growth has been slower than Hasidic enrollment overall; in 2008, Satmar schools enrolled 22,000 in a total Hasidic school population of 61,000, or about 36%. Probable reasons include families joining other sects to escape an ugly Satmar leadership feud, plus smaller Hasidic sects long in Satmar’s shadow growing large enough to launch their own schools.

Nonetheless, Satmar still accounts for about 10% of all day school enrollment. And it’s now about twice the size of Schechter.

Here, then, is the most important insight to be found in Avi Chai’s numbers: Day schooling isn’t catching on among non-Orthodox Jews, despite two decades and millions of dollars spent pushing the idea. The proposition that day schools are the answer to assimilation isn’t panning out.

Some argue that while day schools won’t change the masses, they’ll provide the leadership. Unfortunately, the vast majority of day school growth occurs within a population that shows no interest in engaging with the rest of the community.