‘Taking Out’ Obama, and Our Slide Into Madness 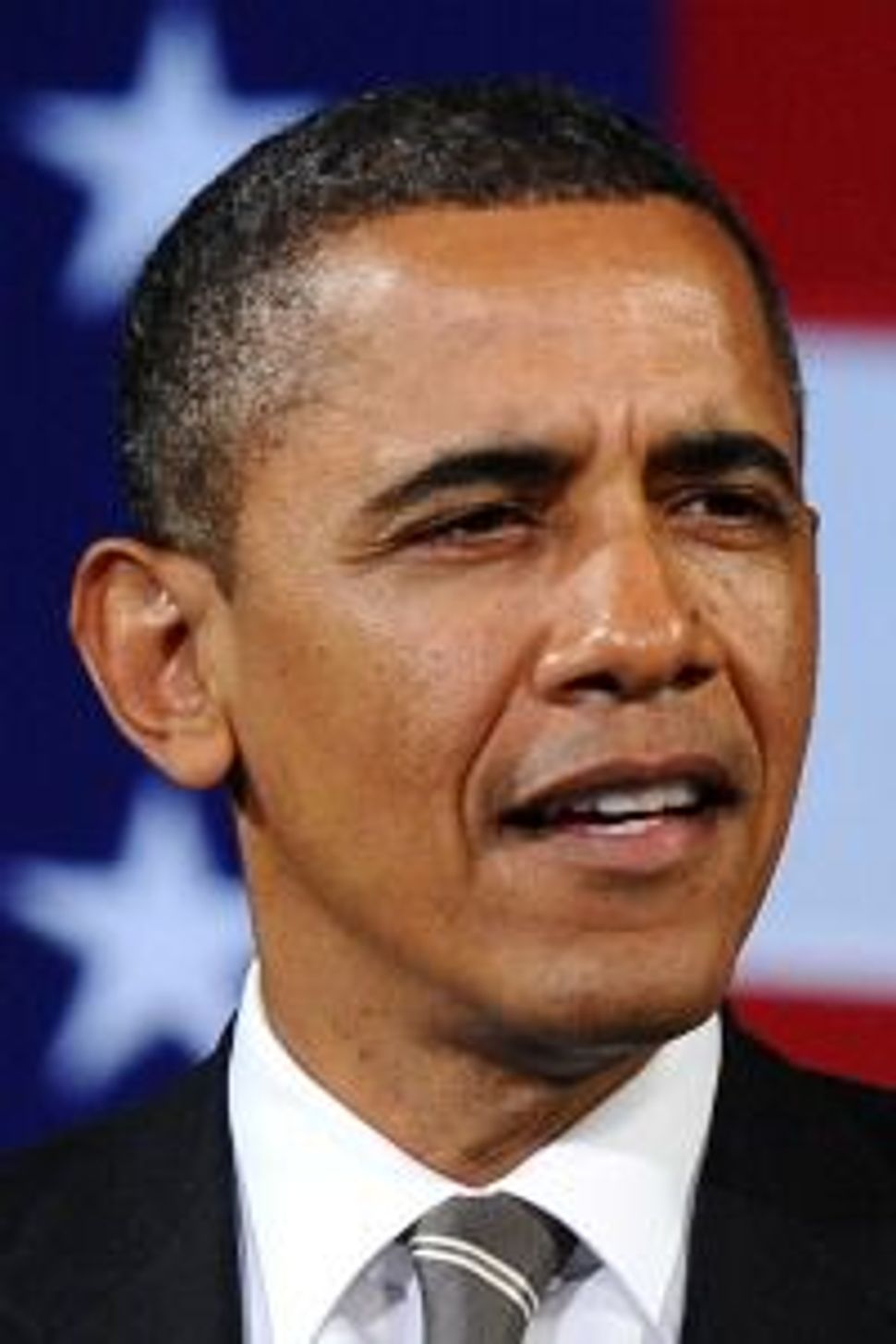 I guess we can all breathe a sigh of relief now that Andrew Adler has resigned as publisher of the Atlanta Jewish Times. His January 13 column, proposing that Israel might consider assassinating President Obama, was enormously embarrassing to Israel, its supporters and Jews everywhere.

Removing him from his visible position makes life a lot easier for the rest of us, doesn’t it?

One could argue that Adler’s outburst shouldn’t cause Jews to cringe; after all, we know that supporting Israel and loving America are not incompatible. We can’t be blamed collectively for the blathering of one fool, even if he provided fuel for the fevered imaginings of those who believe Jews are disloyal. We should have outgrown the old habit of worrying about what others think of us. Proud Jews do what they need to do, not what the world tells them to do. On the other hand, we also worry that Israel is waging a war against delegitimization and isolation, fighting for its good name and legitimacy in the eyes of the world. That is, we sneer at the opinions of the world, but we’re also worried sick about the opinions of the world. I’m sure those two thoughts fit together somehow, though I’m not sure how.

Before we put the Adler incident comfortably behind us, though, let’s linger a moment to consider how such a thing might have happened. After all, this wasn’t just some lone nut talking—it was the owner of the Atlanta Jewish Times, the semi-official voice of one of the nation’s major Jewish communities. A fellow like that is supposed to have some feel for the mood of the community he’s covering, plus enough common sense to run a business and write coherent thoughts. Nor is Adler some self-inflated businessman who decided to purchase intellectual gravitas. He has a B.A. in journalism, according to his LinkedIn.com page. He reportedly worked in the past as the paper’s managing editor, then started up a smaller, independent Jewish weekly before acquiring the Times. What made him wander so far off the reservation?

The answer is, he didn’t. He was speaking for a community—or rather, an assertive subgroup of the community—that considers itself the true heart of the Jewish people and lives in fear and loathing of President Obama. Anyone who circulates regularly in organized communal circles knows what I’m talking about: the earnest denunciations of Obama as hostile to Israel, sympathetic to radical Islam, the worst president for Israel in its history, intent on weakening Israel and leaving it vulnerable to its enemies. Liberals like to dismiss such talk as Republican partisan smoke, but it’s not. It’s widely believed. Lots of people, Jewish and non-Jewish, are genuinely scared of Obama. They shouldn’t be, as we’ll see in a moment. But they are. Many are downright terrified.

We also hear a lot of talk about Israel facing a threat of a new Holocaust, either from Iran, Hezbollah, Hamas, post-revolution Egypt or some combination of all three.

Now, let’s say all that is true—that Israel is threatened with destruction and our president really is complicit in the genocidal plot. What’s a Jew to do? The civil response would be to play by the rules, work for Obama’s electoral defeat and hope for the best. Most people who believe these things seem content to leave it at that. On the other hand, doesn’t that risk repeating what we say American Jews did during World War II—laying low, abandoning our brethren to their fates, for fear of upsetting our neighbors?

If we truly believe that President Obama represents the threat that so many say he does, shouldn’t we be raising every possible alarm, even the most unthinkable? Shouldn’t we stand up confidently and call things as we see them, and damn the consequences?

That seems to be what Andrew Adler had in mind when he wrote his column. He thought through the issues, put two and two together and spoke out. He felt confident he was voicing what proud Jews and defenders of Israel were thinking. He came right out and said it. Prime Minister Netanyahu, he wrote, has three options for saving Israel from Hamas, Hezbollah and the Iranian bomb: “One, order a pre-emptive strike against both Hezbollah and Hamas”; “Two…order the destruction of Iran’s nuclear facilities at all costs,” or “Three, give the go-ahead for U.S.-based Mossad agents to take out a president deemed unfriendly to Israel.”

Yes, you read “three” correctly. Order a hit on the president in order to preserve Israel’s existence. Think about it. If I have thought of this Tom Clancy-type scenario, don’t you think that this almost unfathomable idea has been discussed in Israel’s most inner circles?

Another way of putting “three” into perspective goes something like this: How far would you go to save a nation comprised of seven million lives … Jews, Christians and Arabs alike?

You have got to believe, like I do, that all options are on the table.

So where’s the flaw in his logic? Wrong question. The trouble is with his facts.

To begin with, the fact is that nobody in Israel’s “inner circles” is talking about this crackpot idea. If for no other reason, they know that “taking out” the president of the United States wouldn’t make the United States more friendly to Israel. Israel would instantly become the new Al Qaeda. Okay, that’s a flaw in logic. The very idea is nuts.

More important, it’s a fact that those “inner circles” in the Mossad and the rest of the Israeli intelligence community don’t believe Obama is their enemy. They know, and will tell you frankly, that Obama has done more to upgrade U.S. military cooperation with Israel than any president in years. The Israeli leadership, from the top on down, acknowledges it publicly.

Worst president Israel has ever faced? Dwight Eisenhower kept aid to a minimum, kept Israel at arms length and forced Israel to give up the ground it won in the 1956 Sinai Campaign without negotiating a quid pro quo. Gerald Ford explicitly blamed Israeli “stalling” for a breakdown in peace talks in 1975—something Obama has never done—and ordered a six-month “reassessment” of Middle East policy, which translated into a suspension of aid and military assistance, until Israel was bludgeoned into submission. George H.W. Bush clashed openly with Israel more frequently and more bitterly than any of his predecessors, to the point where he once called a nationally televised press conference to attack American Jewish volunteer activists who had come to Washington for a day to advocate for Soviet Jewish resettlement assistance.

And Obama? He pressed for a settlement freeze to get Netanyahu and Palestinian chief Mahmoud Abbas to the negotiating table. No aid suspensions, no angry, lectern-pounding press conferences. And he talked about using the pre-1967 lines as a “basis” for border negotiations, which has been turned into a falsehood that he wants Israel to return to those actual lines. Nearly every senior member of the Israeli defense and intelligence establishment publicly favors negotiations based on the pre-1967 lines. The notion of an “indefensible border” is not in Israel’s military vocabulary—it’s used purely for political grandstanding and foreign consumption. If the pre-1967 border was indefensible, how did Israel win the 1967 war in six days? For that matter, why is that the last war Israel managed to win quickly and decisively?

As the ultra-hawkish former chief of staff Dan Halutz said a few months ago, “any border that the political echelon decides on is a border the IDF can defend.”

Nor do those “inner circles” believe Israel’s existence is under threat—not from Iran, not from Egypt, certainly not from Hamas. In fact, they feel so strongly about this that they go around saying so in public. This puts them at odds with their boss, Netanyahu, who likes to go around saying that we’re back in 1938 and Iran is the new Nazi Germany. The last head of the Mossad, the legendary Meir Dagan, has been saying since he stepped down a year ago that he’s worried Netanyahu will be “stupid” enough—Dagan’s word—to take himself too seriously and attack Iran, with disastrous consequences. Dagan has said publicly, repeatedly, that when he was on the job he was able — together with Shin Bet director Yuval Diskin and military chief of staff Gabi Ashkenazi — to restrain Netanyahu and his defense minister, Ehud Barak, from their “adventurism.” Naturally, the three didn’t talk about it publicly while they were on the job. Soldiers aren’t supposed to do that. But it was no secret.

By no coincidence, all three were replaced last year with new chiefs who were expected to be more compliant. Now the newcomers are doing the same thing, and unlike their predecessors they’re doing it in public. The new Mossad director, Tamir Pardo, said publicly a few weeks ago—publicly—that Iran is “not an existential threat.” The new IDF chief, Benny Gantz, was in a battle royale with Barak last week over Barak’s attempt to appoint a new air force commander, usurping Gantz’s prerogative. Barak wanted to install an Iran hawk over Gantz’s objections. It appears Gantz won the fight.

That’s how scared Israel’s “most inner circles” are—not of Iran, not of Obama, but of Netanyahu’s itchy trigger-finger.

But Adler is onto something important. His assumptions about the nature of the threats Israel faces—and about Israel’s ability to defend itself with the tools at its disposal—aren’t shared by the people who are paid to defend Israel. Israel’s defenders are pretty good at their jobs, and they know it. But a great many American Jews don’t know it. They—we—seem to see Israel as some sort of oversized shtetl surrounded by storm troopers in desert robes. We’ve somehow gotten it in our heads that it’s 1938 again, that Israel sits defenseless facing an unstoppable threat of annihilation. And this time, we’re desperate not to make the same mistake we think we made back then.

We are living in what’s called an atmosphere of incitement.

Did I mention that Netanyahu has a habit of playing with fire? He’s been playing with the emotional vulnerability of American Jews for years now. It’s time we started taking a warning from Meir Dagan. And Gabi Ashkenazi. And Benny Gantz, Yuval Diskin, Dan Halutz and nearly all of their living predecessors. Life is scary, and the Middle East is a dangerous place. But Israel knows how to defend itself. It’s very, very good at it. It’s time we got that through our heads. It’s time we started believing in Israel, and stopped listening to scare-mongers and demagogues.

No, most of us aren’t quite as delusional as Andrew Adler. Most of us have a hidden shred of sanity that holds us back from taking our terrors to their logical conclusion.

Adler probably has a date with the FBI and the Secret Service in his future. He went a step or two further along the path than the rest of us would dare to go. We should use his misfortune as an opportunity to reconsider that path we’re on. Down that road lies madness.

‘Taking Out’ Obama, and Our Slide Into Madness