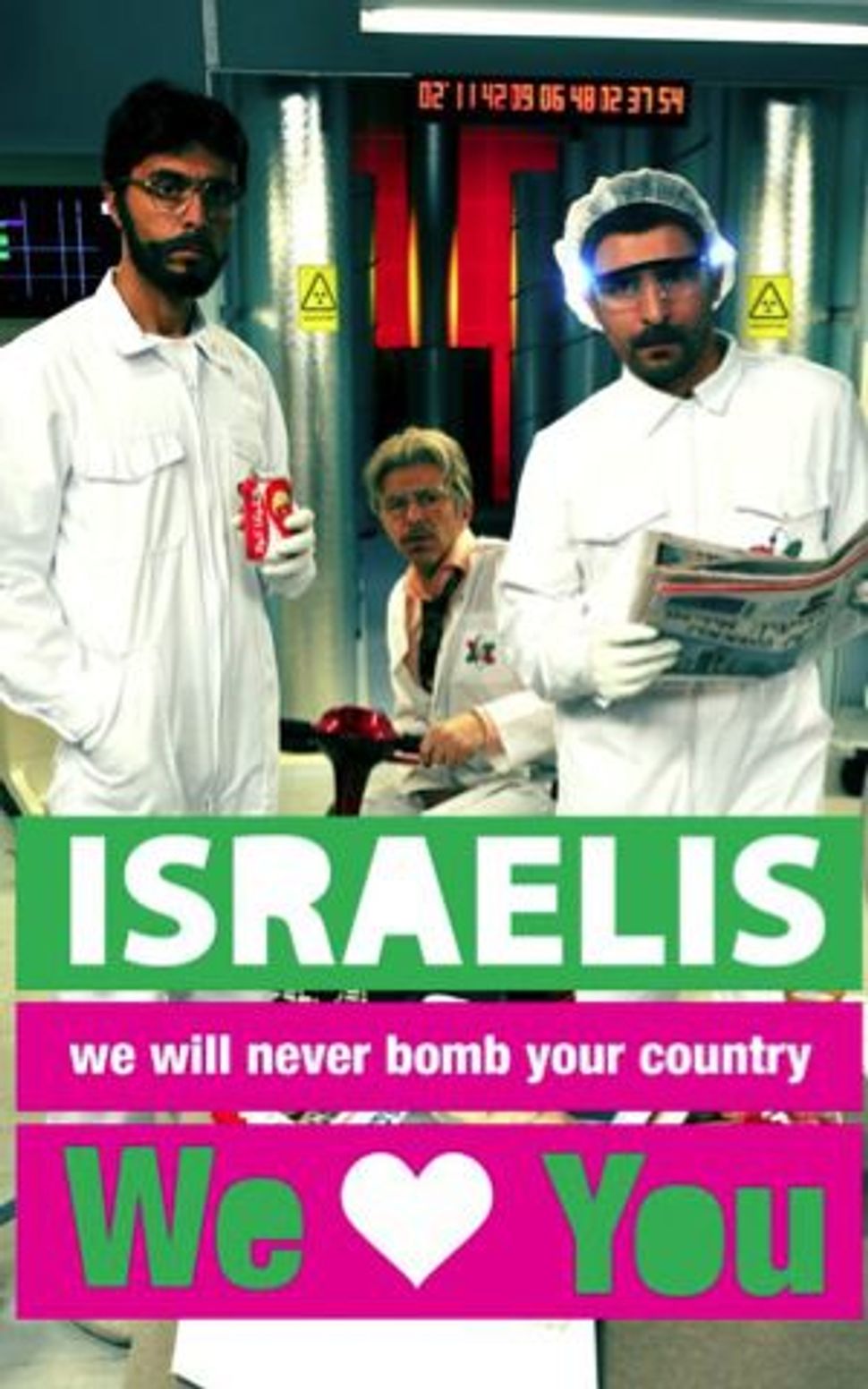 If you weren’t on Facebook this weekend, then you probably missed a huge love fest going on between Israelis and Iranians. As would be expected, the governments of the two countries were not proclaiming their undying devotion to one another. Rather, it was ordinary Israeli and Iranian citizens who were expressing mutual admiration and a hope that war between their two nations can be avoided.

It’s amazing how quickly good will and gestures of solidarity can spread in the Internet age, even between peoples who generally have nothing to do with one another. On Saturday night, two graphic designers, Israeli couple Ronny Edry and Michal Tamir uploaded photos of themselves superimposed with a logo saying, “Iranians, we will never bomb your country. We ♥ You” to the Facebook page of Pushpin Mehina, a small preparatory school for graphic design students. In no time, others were copying the meme and the Facebook page garnered a thousand “likes.”

No sooner had the Israelis started posting their own versions on the Facebook and the “Israel Loves Iran” blog, than the Iranians came up with their response. By Sunday, they were uploading photos with the logo, “ We ♥ You, Israeli People. The Iranian People do not like any war with any country.” While some posted personal photographs, others utilized historical examples of benevolence by Persians and Iranian toward Jews. One was of a photo of the Mausoleum of Esther and Mordecai in Hamadan, Iran. Another was of Abdol-Hossein Sardari, the “Iranian Schindler” who helped 2,000 Iranian Jews flee France during the Holocaust. Yet another had the seal of Cyrus the Great, the ruler of the Persian Empire from 600-530 BCE, with the tolerant proclamation: “I announce that everyone is free to choose a religion. People are free to live in all regions and take up a job provided that they never violate others’ rights.”

Edry told Haaretz that private messages from Iranians started streaming in, as well. One wrote him, “We also love you. Your words are reaching us despite the censorship. The Iranian people, apart from the regime, do not hold a grudge nor animosity against anyone, especially not the Israelis…. We never saw Israelis as our enemies. As such, the regime cannot gain public support for war.”

Dimi Reider, commented on +972 Magazine’s website that given the highly unlikely possibility of an Iranian first strike on Israel, it is not surprising that Iranians are opposed to war. “But it’s important to stress the Israeli opposition to war reflected above is also far from an abstract make love not war’ one,” he wrote. Reider cited a recent survey by Dr. Mina Zemach that found that fully 50% of Israelis were completely opposed to an attack on Iran, even if diplomatic efforts to stall the nuclear program failed. “Forty-three percent supported [bombing Iran’s nuclear facilities], but 78% of those surveyed recognized that even a successful attack would at best delay Iran’s acquisition of an A-Bomb by a few years. Only 16% believed such an attack would wipe out the Iranian nuclear program for good,” he added.

There’s no telling what impact this spontaneous and heartfelt citizen’s campaign might have. In the meantime, some are finding it rather incredible. One Israeli was so moved by the fact that they were actually directly in touch with an Iranian that they produced their own graphic thanking Edry and Tamir and uploaded it. It reads, “I was just chatting an entire hour with an Iranian student. It’s simply amazing what you have done. It’s astounding.”