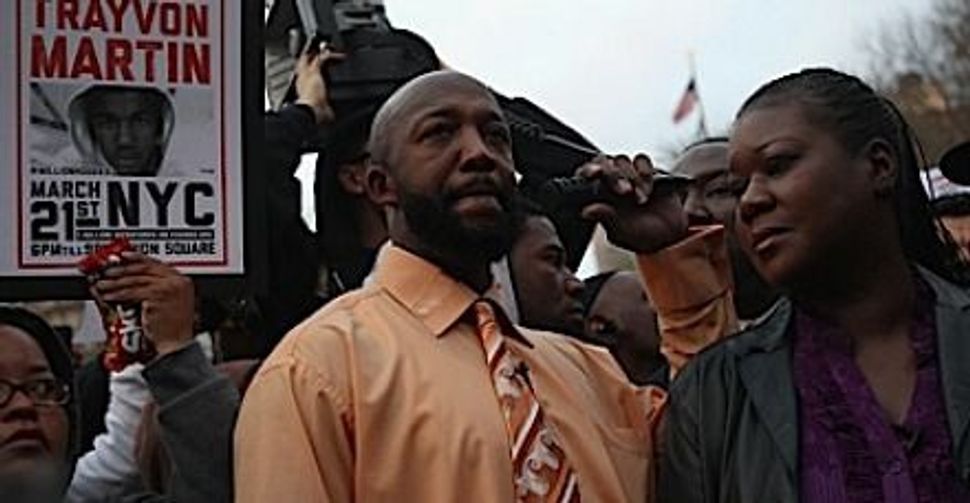 As federal and state authorities investigate the death of 17-year-old Trayvon Martin, and pundits debate the value of the Florida law that, so far, is protecting George Zimmerman from being charged with murder, we would do well to consult the “din rodef.”

Jewish law has much to say about a lot of things, and the fraught question of when, if ever, it is legal and justified to kill in self-defense has kept scholars debating for centuries. As the Forward’s language columnist, Philologos, wrote back in 2004:

“Din rodef means, literally, ‘the case of the pursuer,’ although it might be more idiomatically translated into English as ‘the right of self-defense.’ It refers to the rabbinic precept that, as articulated by Maimonides, says: ‘Every Jew is obligated to save a pursued person from his pursuer, even if this means killing the pursuer.’ A ‘pursuer,’ in the rabbinic context, is someone who is a threat to someone’s life. If you see a mugger with a knife running after someone in the street, for example, he is a rodef and it is your duty, if you can carry it out without risk to your own life, to stop him in any way you can — even by shooting him with the gun you are carrying.”

Philologos was responding here to the uproar generated by the declaration of Avigdor Nebenzahl, rabbi of the Jewish Quarter of Jerusalem’s Old City: “Anyone ceding parts of the Land of Israel to gentiles is, from a halachic point of view, subject to din rodef.” He later qualified the statement, but the damage was done.

Before then, in 1995, the rabbinic concept was famously used by Yigal Amir to justify the assassination of Prime Minister Yitzhak Rabin, on the grounds that his role in seeking peace with the Palestinians through the Oslo Accords actually endangered the Jews of Israel.

Granted, it’s a long way from the crowded square in the middle of Tel Aviv, where Rabin lost his life, to the gated community in Sanford, Fla., where the unarmed Martin died from a gunshot wound to his chest. But the journey is instructive.

The din rodef, as is often the case in rabbinic law, is an elastic concept, pushed and pulled over time, molded to circumstance. As Philologos reminded us: “Rodef, as the rabbis came to think of it, need not be someone actually threatening you with a weapon; it can be anyone endangering you at all.”

But that very elasticity became a recognized danger in rabbinic law precisely because it is so situationally ambiguous. How does one perceive a threat? Today, the answer is muddied further by Florida’s questionable Stand Your Ground law, which allows a person to use deadly force in self-defense well beyond the norms of protecting one’s property. Thus Zimmerman, a Neighborhood Watch volunteer, claimed that he was justified in shooting Martin because the young man, armed only with a can of ice tea and a bag of Skittles, attacked him first. And with such a claim, the Sanford police said that under Stand Your Ground, they could not even detain, never mind arrest, the acknowledged killer.

Police and prosecutors have decried this law, a version of which is on the books in 24 states, for much the same reason that the elasticity of the din rodef has troubled Jewish authorities for centuries. For that reason, Maimonides said that killing a rodef who could have been stopped by lesser means constitutes murder.

The din rodef is to be applied in only the rarest of circumstances, and only when every other alternative has been attempted. Judgment, discipline and sensitivity are required here, which is why moral societies carefully train the police officers and soldiers who pick up deadly weapons on the public’s behalf. As lawmakers work to repeal the dangerous, unnecessary Stand Your Ground laws, they would do well to refer to this ancient standard.