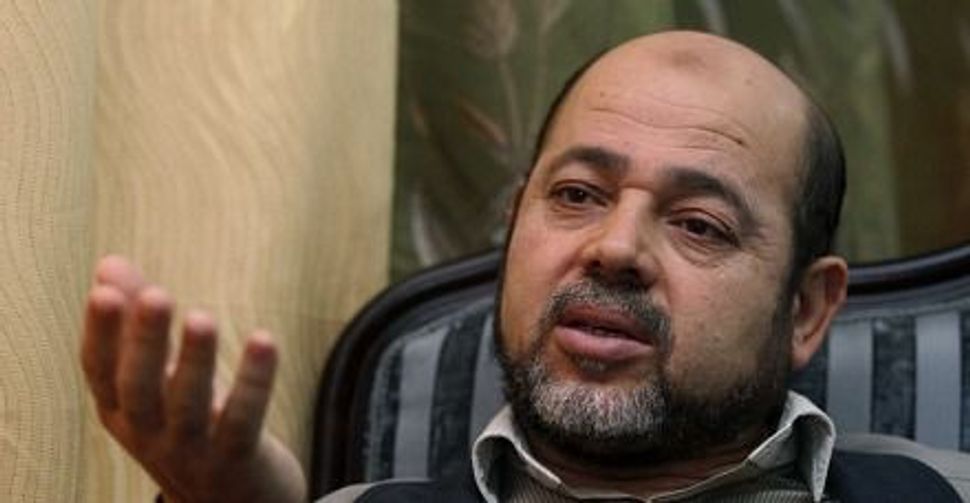 The Forward’s exclusive interview with Mousa Abu Marzook, who is widely considered the second most important leader of Hamas, sends a message that is stunning and sobering. The very fact that the meeting happened will empower those who believe — or need to believe — that the terrorist organization is softening and maturing as it seeks wider acceptance and a more productive role in the new Middle East. But a careful reading of Abu Marzook’s own words, so skillfully transmitted by our Larry Cohler-Esses, also highlights the disappointing, indeed infuriating, fact that Hamas continues to be unwilling to forswear violence and accept the Jewish state of Israel as a reality.

It is a message of opportunity lost, for all concerned.

Before analyzing the substance of what Abu Marzook said in the course of two days of intense questioning earlier in April, it’s necessary to offer some context. Cohler-Esses traveled to Cairo because, in the midst of the excitement and chaos of the Arab Spring, Hamas officials appeared to be saying a variety of intriguing but sometimes contradictory things. He was in search of the truth of Hamas’s position, or as close to it as he could get. This was purely a reporting assignment — on the record, without preconditions and with no topic or question proscribed in advance.

But the Forward is not just a journalistic organization; it is also a Jewish institution. We were mindful of both the historic nature of this opportunity and the risk that it could be manipulated or misconstrued. That is why Cohler-Esses is scrupulous in conveying the context and nuance of Abu Marzook’s words, in a story that is probably longer than anything we’ve ever published in English. Cohler-Esses travelled to Cairo with a notebook filled with precise and probing questions. He had no idea what the answers would be.

Abu Marzook certainly gave reason to believe that Hamas is not immune or indifferent to the revolutionary convulsions sweeping the region. Most stunning is the fact that he met with the Forward at all, and fulfilled every pledge about that meeting. At a time when warring sides should be talking more, not less, this was a powerful statement.

HOW WAS THIS HISTORIC INTERVIEW ARRANGED? FIND OUT HERE.

Clearly, Hamas is recognizing that it needs to reach out to American Jews and, through them, the American public. Even as many citizens in Arab lands are turning inward, attending to the domestic concerns that decades of dictatorial rule have callously ignored, those involved in the Israeli-Palestinian struggle are looking outward. The Israeli government is courting American Jews as never before. So are Fatah’s leaders on the West Bank. It was only a matter of time before Hamas engaged in its own hasbara, too.

But outreach, while welcome and noteworthy, cannot by itself shorten the enormous distance Hamas still needs to travel to become an acceptable partner in any peace negotiations. Abu Marzook’s repeated support of a hudna, an armed truce rather than a treaty, underlines the dangerously wide gap between Hamas and the Palestinian Authority, while granting an Israeli government already reluctant to engage in talks even more reason to stay away.

As Cohler-Esses explains, the distinction between truce and treaty is more than semantic. Israel’s treaties with Jordan and Egypt — while as cold and shaky as that legendary iceberg in the north Atlantic — enable trade, tourism, commerce, diplomatic ties and some degree of acceptance and security. A hudna, an armed truce, provides none of that. Add to that the demand that even a hudna include an unqualified right of return for Palestinian refugees to homes or land to which they lay claim in present-day Israel, and the conversation stops.

It stops not only in Jerusalem, Washington and Brussels, where such demands are legitimately viewed as a threat to Israel’s very existence. It should give pause in Ramallah, too. The P.A. and the many Palestinians who support it must attend to Abu Marzook’s words as carefully as we do, because his views throw into question the very foundation of the on-again, off-again attempts at reconciliation between the two factions in the West Bank and Gaza. For Palestinian voters to wave away such differences would be to grossly underestimate the potential for havoc that could ensue if Hamas ever came to full power.

This extraordinary opportunity to seriously dissect and consider Abu Marzook’s positions and arguments is, in another way, heartbreaking. It stands in stark contrast to what should have been.

September 2008 seems like decades ago, but that was when Israeli Prime Minister Ehud Olmert and P.A. President Mahmoud Abbas came closest to achieving a reasonable solution to create a Palestinian state, end the occupation and ensure Israeli legitimacy and security. Olmert himself has since outlined the deal: A Palestinian state would be established on territory equivalent in size to the pre-1967 West Bank and Gaza, “with mutually agreed-upon land swaps that take into account the new realities on the ground,” as he wrote in the New York Times last September. The two evidently had agreed to allow Israel to keep some land in the West Bank on which Jewish settlements had been built, though they had not yet settled on the precise amount.

The new Palestinian state would be the final destination for Palestinian refugees, with Israel agreeing to absorb an unspecified small number and to compensate the rest. And, significantly, the new state would be nonmilitarized, bolstered by a pledge not to form military alliances with other nations.

Olmert has since described how achingly close Abbas came to signing on to the agreement. But within a matter of days after their last meeting, Olmert was indicted on corruption charges and Israel was forced into new elections. The new prime minister, Benjamin Netanyahu, insisted on starting over “without preconditions,” erasing the momentum of compromise, and Abbas balked. And now? Harder attitudes. More settlement activities. A failed attempt for Palestinian statehood at the United Nations. A more difficult road to climb.

And Hamas to contend with.

The Abu Marzook interview surely can give succor to those who believe that an agreement with the Palestinians is currently impossible. But it also could, and should, do the opposite. In a sense, knowing the alternative in even more detail than before should encourage Israel and the U.S. to do everything in their power to support Abbas and his leadership team. Meantime, there is always hope that Hamas’s ever-so-slightly moderating stance might speed up its evolution.

Because in the end, beyond even the blinding immorality of pursuing terrorism and violence, is the plain fact that it does not work. It has not brought about a Palestinian state, nor the end of Israel, nor even a realignment of Palestinian politics. In the end, Hamas must abandon its armed resistance, or history will abandon Hamas. Perhaps Mousa Abu Marzook will be brave enough to lead the way.