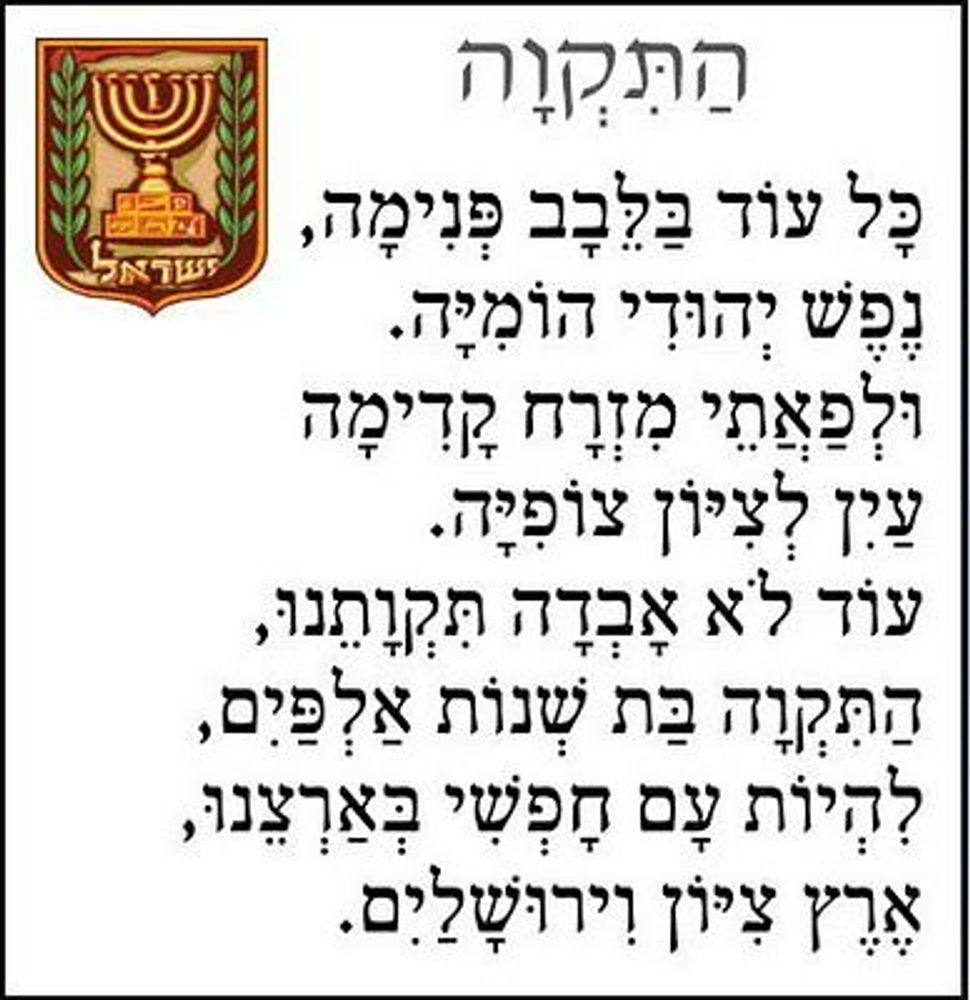 When Neshama Carlebach recently recorded for us a slightly different, more inclusive version of Hatikvah (one first suggested by our language columnist, Philologos), the reaction from some was predictably pretty negative. As one commenter succinctly put it, “Israel is not a binational state. It is the national homeland of the Jewish people. I’d rather Israel be a Jewish state than a democratic one, if a choice must be made. Leave Hatikvah alone. Leave the Israeli flag alone.”

We never intended the recording to be an endorsement of a change in the national anthem. It was meant as a challenge of sorts, an intellectual exercise that might provide an entry point for a conversation about how representative the Hatikvah actually is or should be. Setting this alteration of the anthem to music seemed fitting also because, as a song, Hatikvah has been fairly mutable, with lyrics shifting and changing at various points in history (and I’ll offer a few examples after the jump).

Carlebach herself found herself attacked for having made the recording and she has now issued a statement explaining her decision to participate in this exercise:

It is my belief that music creates bridges, which lead us to harmony and peace. This creative endeavor was not intended to replace the original, iconic song but to expand its power and meaning. Hatikvah is the song of our people. It is mournful, steeped in memory and longing, sung in celebration and commemoration. Hatikvah is close to the heart of every Jew. Hatikvah is my own anthem.

To those who have misunderstood my intentions, I ask you not to dishonor yourselves by comparing my performance of Hatikvah to the acts of the worst persecutors of the Jewish People. As a child I watched my father be spit upon as frequently as he was embraced. I understand the risk of social censure as a creative and spiritual pioneer. There is so much work to be done, so much that needs to happen for our Global Redemption. I hope my music helps us feel that this moment is possible.

You can read her full statement here.

And now here are a few earlier versions of Hatikvah — the 1878 Hebrew poem by Naphtali Herz Imber that was set to music in 1886— to bolster the point that the song has never been a fixed thing.

A version sung by the Hungarian Jews of Munkatch in 1933 and captured in this documentary (skip to 2:45) uses the original words (”Od lo avda tikvateynu, / hativka ha-noshana, / lashuv le-eretz avoteynu, / le’ir ba David, David ḥana” — “We still have not lost our hope, / our ancient hope, / to return to the land of our fathers, / to the city in which David, in which David encamped.”

Then there is incredibly moving rendition sung at Bergen-Belsen in 1945, also using the original words:

There have also been other suggestions in recent years about changing Israel’s anthem, beyond altering a few words of Hatikvah.

In 2004, Knesset Member Mohammad Barakeh suggested that the anthem be changed to Shaul Tchernichovsky’s poem “I believe.” Hear it here. In her recent op-ed about Hatikvah, Merav Michaeli quoted a few lines:

Freedom still my soul demands, Unbartered for a calf of gold. For still I do believe in man, And in his spirit, strong and bold.

And in the future I still believe Though it be distant, come it will When nations shall each other bless, And peace at last the earth shall fill.

Two more recent suggestions are Shir L’a Moledet (A Song of the Homeland) and Shir Eretz (Song of the Land/Country) written by Slaman Matzlacha. Lyrics in Hebrew to this last one are here. And this is a rough translation:

Between the sea and Lake Kinneret the dark soil bleeds hatred, seeping from the earth, into the veins of the sons of Adam.

At times, it pauses, at times, it returns – war – bloody coins – revenge, revenge.

But ancient legends tell of a wise generation who discovered this Land:

Who took up the burden to clear away the wild brambles, to plow the dark soil into furrows.

And for safekeeping, here, they sow ed the seeds of love, and also, the spirit.

So that, when peace returns, everyone will sing gladly: Arabs, Christians, and the children of Abraham our father:

Between the sea and lake Kinneret, from Galilee to the hot Negev, Guard our soul, our homeland for eternity.

Then again, we can always stick with Hatikvah, but switch to the “house” version. No words, no problem.