On the Train Back to Williamsburg 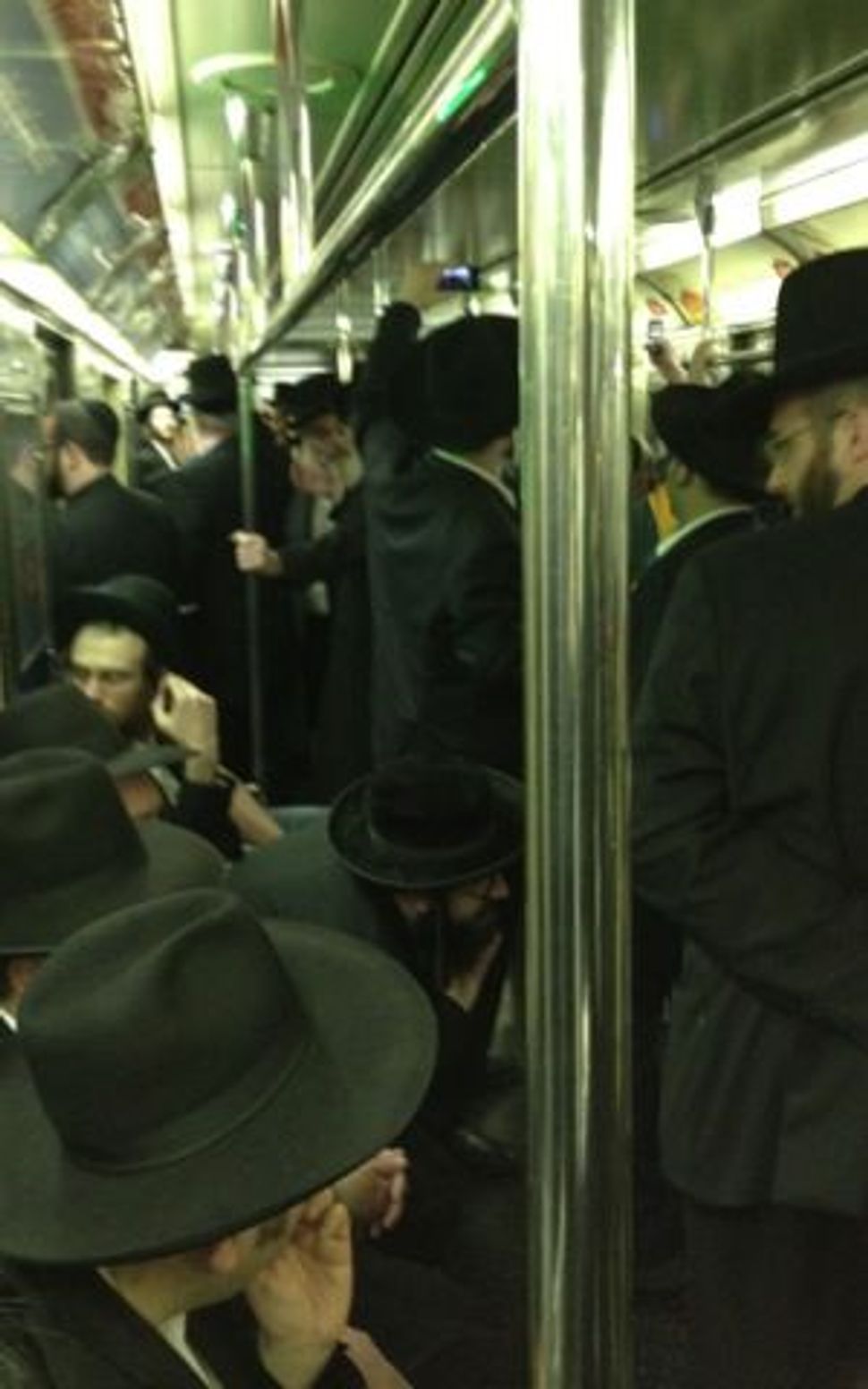 On the G train home from the ultra-Orthodox rally at Citifield last night, I talked Zionism with a passel of Hasidim headed for Williamsburg.

A rabbi named Yechiel Meir Katz had drawn an implicit historical parallel in his address earlier in the evening between the rejection of Zionism by the Orthodox and the need to reject the Internet.

Another speaker, Rabbi Ephraim Wachsman, underlined the point, citing Communism and Zionism as historical challenges the Jewish people had been forced overcome.

On the subway headed from Citifield to Williamsburg, I asked a group of mostly Satmar Hasids about the comparison between Zionism and the Internet.

“Everyone who has a Jewish heart knows Zionism is against Judaism,” said one, speaking from the back of the small crowd that had gathered around me.

The sentiment isn’t rare among the Satmar, who remain among the most anti-Zionist of the ultra-Orthodox groups.

What was rare, at least for me, was to have a conversation with a Satmar Hasid about these sorts of controversial ideas.

Though it was the exhortations against the use of the internet by a handful of rabbis on the JumboTron at the that drew headlines, the real action at the anti-Internet rally was in the stairwells and the subways, where ultra-Orthodox of all stripes mixed and chatted with each other, and with me.

As I reported this morning, organizers did their best to keep the press away from the event. No tickets were provided to reporters. I bought mine in the parking lot from a Skver Hasid with an extra. My seat in the right field nosebleeds was in the middle of a crowd of Skver Hasids, many of them from the upstate enclave of New Square, which is dominated by the sect.

Even among Hasidic sects, the Skver are known for their insularity. So I was surprised at the gregariousness of some of the Skver, and in their interest in me. Most hadn’t heard of the Forward, but some asked to be quoted, and one 18-year-old even asked to have his photo taken and used in the paper. (My editors haven’t chosen to run it yet.)

The Skver showed me what they called their “kosher phones,” cell phones without photo or texting capabilities. One of the young Skver men, a 23-year-old from Williamsburg named Don Stern, had a Bluetooth headset in his ear hooked up to his kosher phone. He said that he didn’t know how to play baseball.

It’s impossible to talk to one or two Hasids at once. Gaggles invariably form around reporters interviewing Hasidic men in public places as other Hasids crowd around, pushing their heads over each other.

On the subway home, I asked a Satmar sitting next to me what he had thought of the rally. He referred me to a Satmar across the aisle, and soon enough half the subway car had formed a circle around us.

Getting their names was next to impossible. This had been a problem the entire day. On the G train on the way to Citifield, a young Bobov Hasid traveling from Boro Park with his father and brother told me his name was Ben Zion Halberstam. I wrote it down, then noticed everyone was laughing. He had given me the name of a former Bobov rebbe.

With the Satmars on the G train to Williamsburg, I asked about the contentious dispute between the followers of Aaron Teitelbaum and Zalman Leib Teitelbuam, the two brothers with dueling claims to the leadership of the sect. Zalman had attended the rally, scowling seriously on the dais; his brother had stayed away. The men said that some of them were followers of Aaron and others of Zalman, and they had no personal problem with each other. I went around the circle, asking who was with which group.

The men also gave me a primer on the fine distinctions between the hats favored by the Satmar Hasids and the hats worn by the small Klausenburg sect.

The conversation about Zionism ended quickly. As the Satmar in the back of the crowd said that Zionism was against Judaism, others told him to be quiet, perhaps understanding better how the quote would sound to secular ears.

On the Train Back to Williamsburg