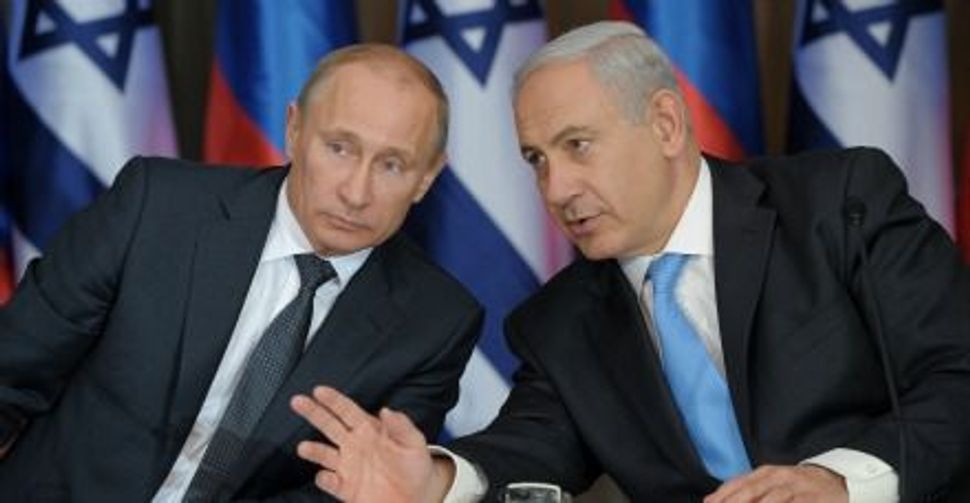 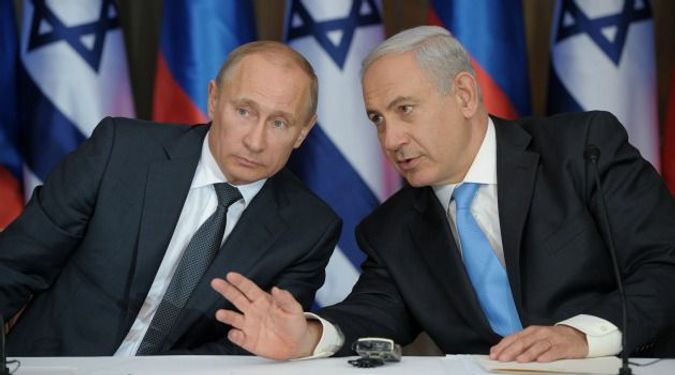 Common Ground: Despite obvious differences on Syria, Russia and Israel have a joint interest in better ties. Image by getty images

Russian President Vladimir Putin visited Israel in late June with the ostensible purpose of helping to unveil a monument to the Soviet soldiers who helped defeat Nazi Germany. But Putin’s motivations for this trip to the Middle East were not so innocuous. In fact, they underlined the degree to which his ambitions for the region have not changed at all since his last reign as Russia’s president, from 2000 to 2008. In other words, the days of a relatively moderate, collaborative approach, pursued by Russia’s previous president, Dmitry Medvedev — including an agreement to participate in serious sanctions on Iran in 2010 and to take action against former Libyan dictator Moammar Qaddafi in 2011 — are a thing of the past.

Putin wants Russia to be acknowledged as a major player in world affairs, and he sees the Middle East, with its numerous crises, as an excellent place to plant a flag. His goal has always been to replace American hegemony with a multi-polar world where Russia plays a crucial role. His strategy seems to be one of economic entanglement, with the sale of high-tech items such as nuclear reactors to Iran, major infrastructure projects such as railroads to Libya and sophisticated armaments to Iran, Syria and Libya. In addition to selling, he wants to buy, specifically, high-tech imports from Israel, such as nanotechnology to help grow a Russian Silicon Valley. There are joint projects in the works, as well, efforts to develop oil and natural gas deposits in Iran and Saudi Arabia (and possibly in Israel — see below) in order to replace dwindling Russian domestic supplies. On top of all this, the Russian president also has an interest in preventing the Middle East from being a source of support for radical Islamists active in the North Caucasus, in regions such as Chechnya and Dagestan, and so he wants to swap as much intelligence as possible.

Since regaining the Russian presidency in March, Putin has pushed forward these objectives in a few ways, but most notably by protecting the bloody Syrian regime of Bashar al-Assad from serious international punishment and the Iranian regime from additional United Nations Security Council sanctions for its continued nuclear enrichment activities.

What’s in it, then, for Israel? Unlike Russia’s primary allies in the Middle East, Israel is a pro-American and democratic state. Israeli Prime Minister Benjamin Netanyahu nevertheless warmly welcomed Putin to Israel. Why? There are four answers to this question.

First, unlike in Soviet times, Israel and Russia enjoy excellent bilateral relations, despite Russian support for Iran, Syria and even Hamas. Trade between the two countries is approaching $3 billion a year; there are extensive cultural relations, primarily between Israel’s Russian immigrant population and Russia; a half a million Russian tourists visit Israel every year; Israel has sold military drones to Russia to help it after its poor military performance against Georgia in 2008, and above all, given Netanyahu’s Zionist ethos, the gates of Putin’s Russia have remained open for Jewish emigration.

A second factor relates to Israeli domestic politics. While polls have shown that the vast majority of Russian immigrants do not want to replace Israel’s American alliance with a Russian one, they do appreciate the fact that because of good bilateral Russian-Israeli relations, they can easily fly back and forth between Russia and Israel, both for business reasons and to see family and friends who have remained in Russia. Consequently, maintaining good bilateral Russian-Israeli relations is helpful to Netanyahu, as Russian immigrants currently form 20% of Israel’s population and make up a big part of the political base of Netanyahu’s ruling coalition.

Third, following the onset of the Arab Spring, which has brought Islamists to power in Tunisia and Egypt, both Israel and Russia share an interest in preventing the spread of radical Islam in the Middle East, and intelligence cooperation was most likely one of the topics discussed by the two leaders.

Finally, Israel is developing its natural gas reserves off its Mediterranean coast, and the gas should start flowing in 2013. This is fortunate for Israel because, following the ouster of Hosni Mubarak, Egypt has ceased to supply Israel with natural gas via the pipeline through the Sinai Peninsula. Moscow has an interest here, as well. Russia’s mammoth state-owned natural gas company, Gazprom, has offered to help Israel in developing this energy source. Although current estimates of Israel’s proven reserves of natural gas are not that high, they could grow, making Israel a competitor with Russia for sales of the fuel to Europe. Putin sees a quid pro quo. The main obstacle to Israel moving forward with this natural gas venture is diplomatic, not technological, as the sea border between Israel and Greece is being disputed by Turkey, which might hold up the operation. What then might come out of the discussions with Gazprom is an informal agreement under which Israel would not sell natural gas to Europe, and under which Russia would help develop the natural gas in the disputed area.

Like the rest of this strange new relationship, if all goes well, both sides expect to win.