Israel Ups Iran Ante, But Is It Bluff? 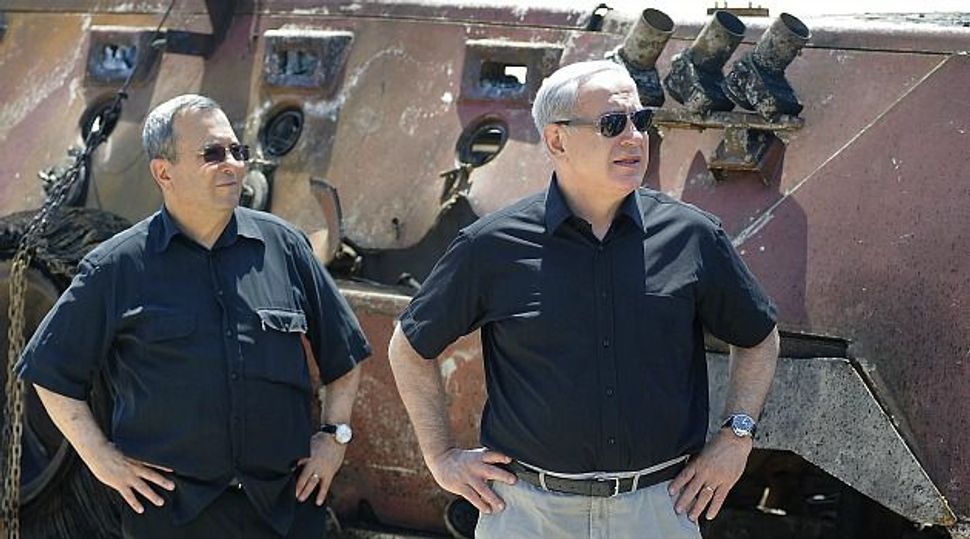 Escalating Tension: Benjamin Netanyahu may think he has leverage over the White House in the months leading up to the U.S. election. Image by getty images

On August 12, Israel’s deputy foreign minister, Danny Ayalon, called for an international declaration that diplomacy with Iran had definitively failed. Benjamin Netanyahu’s government itself declared the talks all but dead even before they began, but Ayalon’s explosive comments added fuel to the bizarrely public debate in Israel about whether to bomb Iran.

This debate has lingered for several years now, though currently it appears to be at a crescendo. But precisely because it’s yesterday’s news, both the markets and the international community seem to be treating it as yet another Israeli cry wolf moment.

Indeed, the timing of the latest round of public speculation and leaking by Israeli Cabinet ministers seems to have more to do with America’s election cycle than with any particular developments with the Iranian nuclear program.

It is no secret that Netanyahu prefers a Romney victory in November. His tensions with President Obama are well documented and cover a broad spectrum of issues — from the Iranian dossier, to the Palestinian conflict, to the Arab Spring.

Netanyahu appears to have Obama in a box in which escalation or mere threats of escalation by Israel can have no negative repercussions. If the threats result in — as they have in the past — even more sanctions and pressure on Iran, then that would be a win for Netanyahu. Sanctions cripple Iran’s economy and slowly weaken Tehran’s ability to be a potent challenger of Israel in the region. Sanctions also render a return to talks more unlikely, which means an increase in the probability of war.

If Obama, on the other hand, resists the pressure from Netanyahu and ends up in a public dispute with the Israeli government, then that would shine a light on the differences between Obama and Netanyahu. This, in turn, would benefit the Romney campaign, as it would open up Obama to further criticism of being insensitive to Israeli concerns. Romney would come across as being on the same page as Israel, whereas Obama would be out of sync with the Jewish state. Strategists in both camps believe that this would hurt Obama in key battleground states in the elections.

Consequently, there are few drawbacks to the Netanyahu government consistently increasing the pressure on Obama as we get closer to the elections. Obama’s options are limited, and all appear to end up benefiting Netanyahu.

But what if Netanyahu isn’t bluffing this time around? What if he views the likelihood of a second Obama term as high and as a result the window before the elections as his last best chance to strike Iran? Keen analysts of relations between the United States and Israel, such as former deputy assistant secretary of defense for the Middle East Colin Kahl, caution against believing that Netanyahu is crying wolf this time around.

What will Iran’s response be if Israel does attack? The government in Tehran takes pride in being unpredictable in such situations, but a few scenarios can be envisioned.

If the attack is unsuccessful or only moderately successful — that is, the nuclear program is damaged but not destroyed, and civilian casualties are limited — then, contrary to its stern warnings of a crushing response, Tehran may play the victim card.

Instead of responding militarily, Iran would take the matter to the United Nations and demand sanctions against Israel for taking illegal military action. A veto by the United States would prevent any meaningful punishment of Israel, but international sympathy would shift toward Iran. Tehran would then threaten to leave the Treaty of the Non-Proliferation on Nuclear Weapons and expel all inspectors from the International Atomic Energy Agency. This would completely blind the world to any insight on the Iranian nuclear program and provide Tehran with a legal path to a nuclear bomb.

To prevent such a nightmare scenario, incentives would be offered to Tehran to remain within the NPT, including the lifting of sanctions. The international consensus around sanctioning Iran would unravel, and Tehran would find an exit from its current isolation.

Moreover, the regime would find a pretext to clamp down further on the indigenous pro-democracy movement and fortify its own grip on power. The higher oil prices following the attack would enrich Tehran’s coffers, and the focus of the Arab street would shift away from Iran’s losing proposition on Syria and Bashar al-Assad’s butchering of his own people and back to the more usual focus on Israel as the common enemy of the Muslim people. Iran’s narrative on Syria — that the uprising there is an Israeli ploy aimed at weakening the “arc of resistance” — would likely find new buyers in the Arab world.

And perhaps most important, Iran exiting the NPT would also be a reliable indication that the debate in Tehran has shifted toward building a weapon rather than just pursuing the option of building the weapon. The attack, in short, would increase the likelihood of an Iranian nuclear bomb.

If the Israeli attack is successful, however, meaning that it sets back the nuclear program significantly, and if the civilian casualties are high, then the likelihood of an Iranian military response will be more significant. How Tehran will respond, however, remains a question mark.

But we do know, with a certain confidence, a few elements of Iran’s strategy. First, Tehran will likely utilize its comparative advantage in stamina and perseverance. Israel, as a modern open society, is believed to be incapable of handling a military conflict on its own soil for long. The attack on Lebanon in 2006 is a case in point. Hezbollah’s rocket attacks put the Israeli economy at a standstill with one-third of the Israeli population being internally displaced. After 34 days, Israel called it quits. By failing to defeat Hezbollah, the Lebanese had scored a major victory against the much superior Israeli army. Compare this with Iran’s ability to sustain eight years of warfare against Iraq in the 1980s, six of which took place on Iranian soil, with Saddam Hussein using chemical weapons against both Iranian civilians and military.

Second, Iran’s main takeaway from the war with Iraq is never to fight another war within its borders. As a result, at the earliest stage of the next war, Tehran is likely to expand the war theater to include the entire region — and beyond. The more that the war is fought throughout the region, the less it will take place in Iran itself, and the longer Iran will persevere.

The consequences of whichever option Iran pursues are difficult to predict. Consequently, the Israeli cost-benefit analysis of an actual attack is far murkier than the calculus of continued threats.

Whereas threatening military action has provided Netanyahu with a no-lose strategy, actually implementing the threat can put Israel in a no-win situation.

Perhaps Netanyahu is crying wolf, after all.

Trita Parsi is the founder and current president of the National Iranian American Council.

Israel Ups Iran Ante, But Is It Bluff?