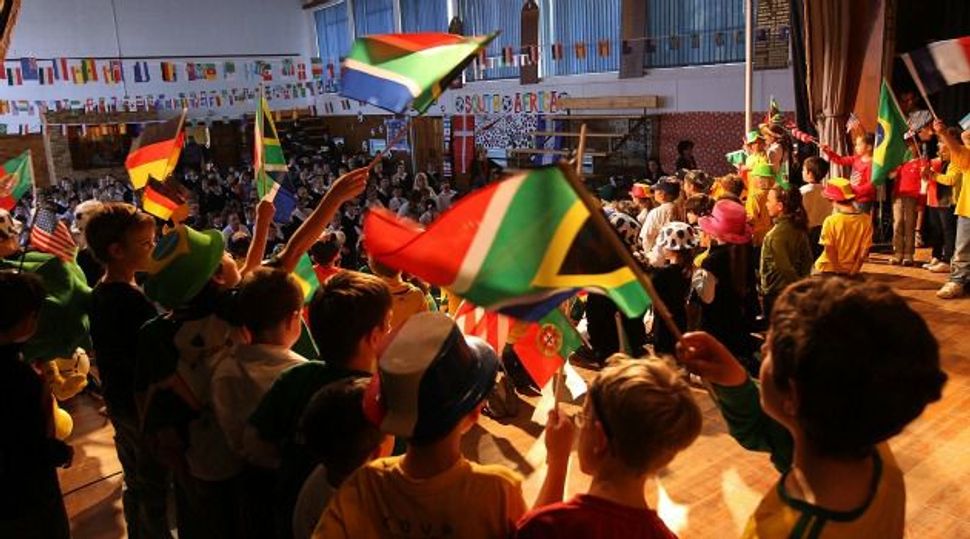 African Jews: South African Jewish children celebrate the soccer World Cup in 2010. The community survived apartheid and now is struggling to find its place in the new South Africa. Image by getty images

My first visit to South Africa, and the impressions were jarring.

I grew up in liberal America, where apartheid was a curse and a cause rather than a way of life. I knew very few South Africans, Jewish or otherwise. And then I moved to Israel, and then Nelson Mandela whooshed to president from prisoner, and then life just went on for so many years. And now it’s 2012, and I land in Johannesburg for the Limmud conference, which took me to Durban and Cape Town, as well — legendary places along the seam between Atlantic and Indian oceans, between vicious past and misty present.

In Jo’burg it hits you right away, on the drive from the airport. Reddish earth, rusty buildings, poverty that makes Palestinian villages look wealthy. All the pedestrians, every last one of them, are black. The whites people today live in gated communities, where they sarcastically call themselves the “last outpost of the British Empire” and exchange stories about getting mugged as they look out past the barbed wire that keeps out the crime.

Nearly two decades after its first democratic elections, South Africa is still a work in progress. Afrikaans, the language of the oppressor, has been suppressed, and English has taken over as the public lingua franca.

Corruption is rampant, and this prevents the effective fighting of crime. More murders, rapes and carjackings here than anywhere else. The rand, once even with the dollar, is now worth about 12 cents.

At the same time, the country’s successful postapartheid constitution and mostly independent judiciary make for greater hope of genuine democracy than perhaps anywhere else in Africa.

Jews here, like everywhere else, are torn between their ideals and the demands of communal survival. Not unlike the Jews of the United Kingdom and elsewhere, they are (a) generally liberal in both politics and religion, (b) struggling with an increasingly intemperate ultra-Orthodox minority and (c) embarrassed by Israel. (When asked why, one local Limmudnik answered, “Settlements, Lieberman and Lieberman.”)

But on that first day, I notice that embarrassment can run both ways, and my Boston-bred liberal instincts suddenly had me feeling very uncomfortable. The role of local Jews in both supporting and fighting apartheid is a very sensitive subject. People on both sides of the divide found themselves praying in the same synagogue.

The official Jewish leadership kept a low profile, while many Jews actively helped Mandela’s African National Congress party. Every Jew, of course, was against apartheid — but some were against it only in retrospect. Being almost entirely of Lithuanian-Jewish descent, they are just pale and blond enough to look like the Northern European colonialist oppressors, and they talk like them, too, hiding behind their gates with their heads down, protecting their skins.

This first impression was, of course, horribly unfair — and within a few days I realized that I was falling into the same trap as many of them have toward me, the Israeli.

What is that trap? It’s the trap of rendering snap moral judgments against a Jewish community struggling to survive under twisted conditions. I do not mean to excuse anyone who supported apartheid at the time. Rather, what I mean is to put my loyalty to this community above the purported obligation to judge a reality that is much more complex than apartheid itself: the reality of survival as a self-respecting, internally conflicted Jewish community in South Africa over the last generation — a community more than capable of judging their own.

South Africa and Israel are worlds apart. The only thing they have in common, really, is that both of them are, for too many Jews around the world, unreal places that resonate deeply with people who have never been there and have little real familiarity. For many of us, South Africa and Israel are scenes from our own inner movies: We project an abstracted, caricatured, ignorant version of them onto the screens of our minds, to affirm our sense of ourselves.

But as soon as you actually go to these places, and meet the people, and ask the hard questions, you may discover something completely different: Jews, playing out the very same endless struggle between their will to live — which makes them play power politics and sometimes look more like the non-Jewish power classes than they want to admit —and their will to be different and better than the rest of humanity. Normalcy and uniqueness: Every Jewish community must find its own equilibrium in its own specific situation.

Jewish communities should always be admired for their survival, for the simple reason that Jewish survival is an inherently unlikely thing. Unlike most human communities that survive, we do not idolize power, we do not take pride in the enemies we have butchered, we have little use for the idolatry of the state or the dear leader or the motifs of muscle and steel. We have carried through for millennia, on the strength of an unparalleled affirmation of life, of an aesthetic and a spiritual and intellectual excellence. We are, above all, survivors, not just in body, but in Jewish spirit, as well.

To be a Jew means to live your whole life protecting a soft thing, an eternal thing, a holy thing. And we are doing it in the midst of a swirling, violent, rapidly changing world. It is no different in the United States, in South Africa or in Israel. Nor is there any real difference between the Orthodox who protect it through Halacha, the liberals who protect it through activism or the Zionists who protect it through force of arms. The equation is the same; just the variables change.

“Who is a Jew?” Eliezer Berkovits once quipped. “Someone whose grandchildren are Jewish.” This is perhaps the most important criterion for judging each other. In South Africa, it is a uniquely painful struggle, and all the more valiant for it.