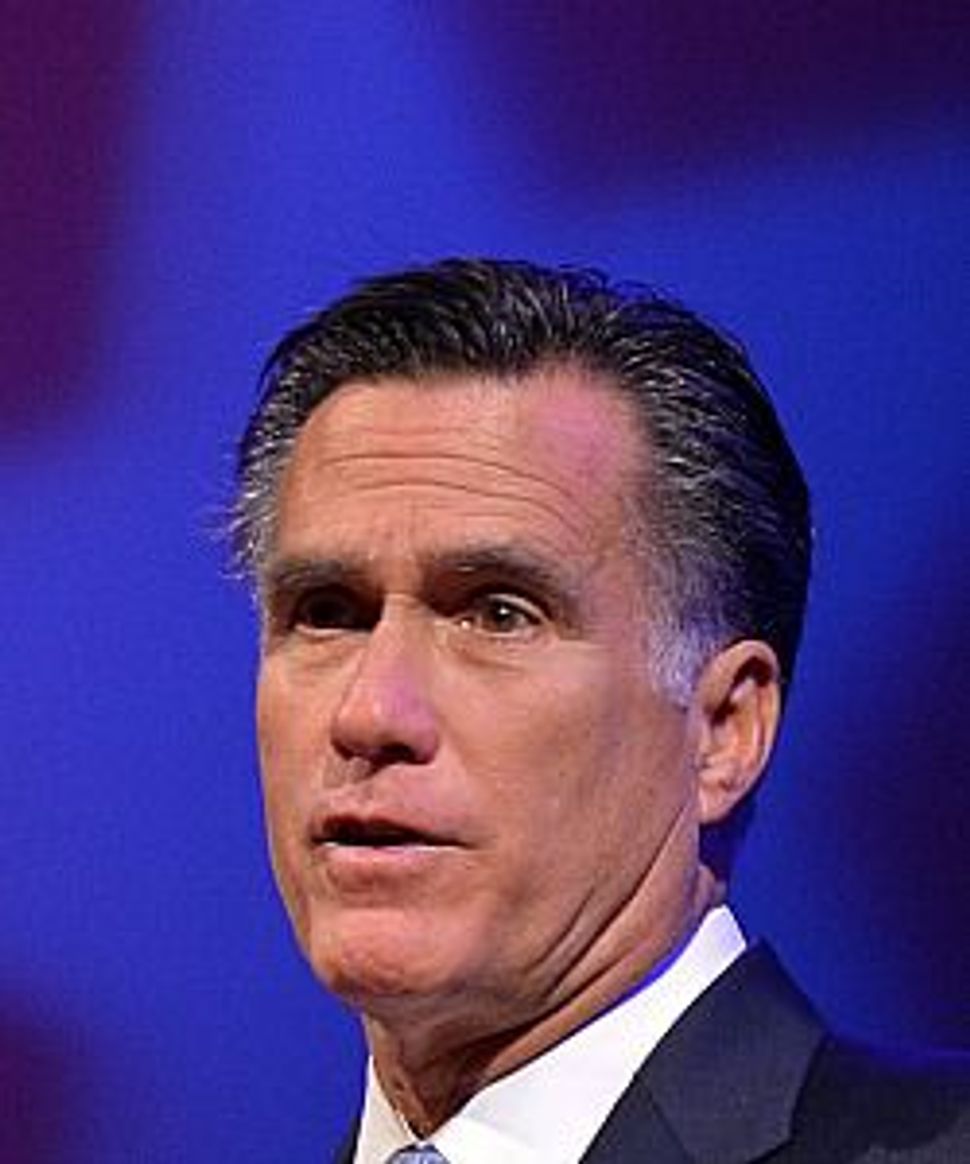 Of all of the tough sells in this election year, you have to hand it to former George Bush speechwriter Noam Neusner for coming up with one of the toughest. In an op-ed timed to coincide with the Republican National Convention, Neusner exhorts the largely Democratic, largely Jewish readership of the Forward :

No one knows better than Neusner, who also served the Bush White House as liaison to the American Jewish community, the level of chutzpah embodied in his call. In fact, he himself cops to it from the very beginning:

“Regular readers of these pages are most likely strong supporters in the safety net programs set up in the New Deal, Great Society, and now Obamacare legislative eras,” referencing the Democratic administrations of Franklin Roosevelt in the 1930s and Lyndon Johnson in the mid-’60s.”

“They hold these programs to be good examples of America’s capacity to care for the ill, the poor, the destitute and the aged. And they find in these programs America’s expression of the Jewish concept of tikkun olam, repairing the world as it is, in the service of God and Torah.”

“You can stick with a president who believes deeply in the power of the state and who has done a lot to make tikkun olam voters happy, but who is, without question, endangering our nation’s ability to pursue tikkun olam programs in future years,” he writes.

Or, “you can switch to a candidate who believes in the power of individual freedom – and has shown through his own example of voluminous giving of charity to his church and his community that prosperity and success breed far more tikkun olam than can be achieved through the taxing power of the state.”

If the Republican Convention has been any measure, there are still a number of questions Neusner might want to answer on the issue of tikkun olam.

Is it repairing the world, as the party platform holds, to ban all abortions, no exceptions?

Is it repairing the world, as Paul Ryan’s Wisconsin has sought, to break, denigrate, undermine and eliminate the very unions that Jews were so instrumental in creating, and which gave generations of immigrant Jews a crucial start on the ladder of success in America?

Is it repairing the world to ridicule the existence of global warming?

Is it repairing the world to flatly oppose same-sex marriage?

Is it tikkun olam for Republican legislators to take pride in blocking Democratic economic proposals even when many of those Republicans supported similar proposals in the past?

Is it tikkun olam to advocate preserving tax breaks for the wealthiest Americans, while cutting essential social services and laying off such public sector employees as police, fire-fighters and teachers?

When New Jersey Governor Chris Christie speaks of Americans’ courage in having overcome the Great Depression, does he really believe that this was a matter of individuals and small businesses acting on their own?

Could it be that the Medicare and Social Security that the Republicans seem suddenly so concerned about saving from the clutches of Big Government, were expressions of tikkun olam as practiced by Democrats in 1965 and in 1935?

What is it, exactly, about the Republican credo that is meant to repair the world?

Neusner allows that under Obama “tikkun olam has had a pretty good four years. However, he adds, alluding to government spending, “it sure doesn’t look to me like it has a very rich future. At some point, all that tikkun olam is going to wreck the country, and that, if I’m not mistaken, is pretty much the opposite of the goal of tikkun olam.”

Slamming the practice, in his words, of “seizing wealth from people who work hard to give it to people who don’t,” Neusner declares, “You could say that freedom and free markets are just about the best thing that Judaism has ever known. And in that sense, free markets and freedom have been good for tikkun olam.”

From where I sit, I suspect that Neusner may have the order of things reversed. It appears strongly to me that in America, government programs to repair the world – and, in the process, end black-white segregation, promote literacy, and provide opportunities to immigrants and the poor – have been essential for the creation and preservation of freedom and free markets, and for offering the benefits of both to as wide a spectrum of Americans as possible.

I suspect that this election year, as they have in decades past, American Jews will again vote to repair the world. For the great majority of them, repairing the world, or at least taking your best shot at it, will still mean Barack Obama.