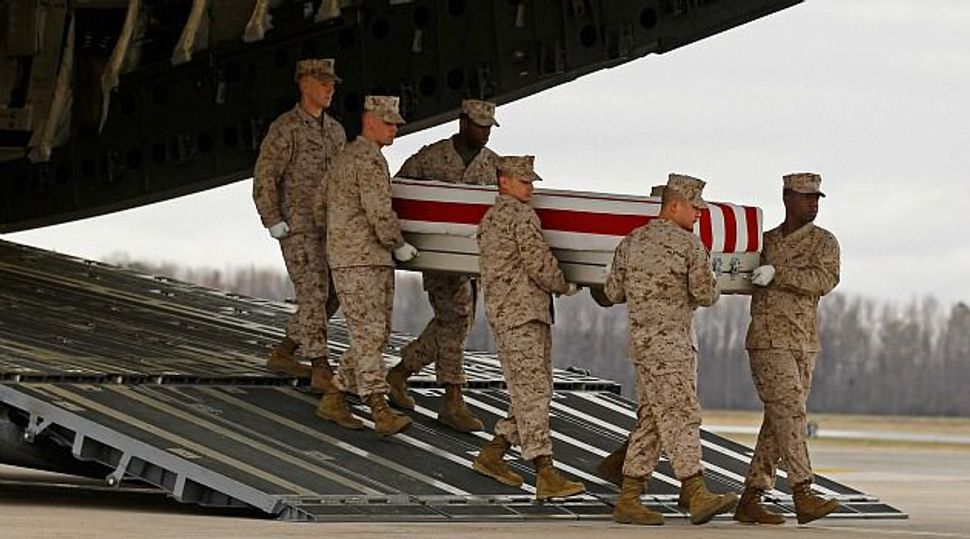 In mid-August, 127 Americans flew to Israel with the intention of joining the Israel Defense Forces. They arrived at Ben-Gurion International Airport to a boisterous and well-organized welcome, complete with a live band, balloon hats, and a speech delivered personally by Prime Minister Benjamin Netanyahu. Photos of would-be soldiers joyously dancing in the airport arrival hall circulated on the Internet, while many of their parents posted proud but anxious messages on Facebook.

“You’ve decided to defend the Jewish future,” Netanyahu told them.

About a month before this well-reported scene — on July 21, to be exact — Michael Brodsky died in Kandahar province, Afghanistan, from injuries caused by an improvised explosive device. He was 33 years old. He died as a member of the United States Navy, and as a Jew. When he and his brother enlisted right after the September 11 terrorists attacks, they got matching tattoos of the Star of David. And when Michael was deployed, his father told the Forward, he carried an Israeli flag with him.

As a Jewish community, we rightly celebrate the commitment and passion of the young Americans determined to contribute to the defense of Israel. But do we pay as much attention to the many more American Jews who have served in the deadly theatres of war in Iraq and Afghanistan for nearly 11 years?

In February 2011, the Forward published profiles of the 37 Jewish servicemen and women who had died in the two wars over the previous decade. By last Veterans Day, two more names had been added to the list.

Now, that sorrowful tally has grown to 50 — a number that includes fresh losses such as Brodsky and the names of others whose Jewish identity has only recently surfaced. The Department of Defense does not release information of enlisted men and women based on religion, so several independent groups try to collect as many reliable names as possible.

Read the Forward’s new profiles of 13 Jewish service members who died fighting in Iraq and Afghanistan.

One of those groups, the National Museum of American Jewish Military History, relies on word of mouth and newspaper clippings to assemble the names. If an obituary lists religion, if a headstone has a Star of David, if family members or friends pass along a name, it is included in the list, said Pamela Elbe, the museum’s collections manager and archivist. This form of Jewish identity may not fit the strictest halachic standards, but it honors the dead in the way they wished to be known in life. “I’m sure that there are many more we just don’t know about,” Elbe said.

And therein lies another sorry consequence of our relative silence about Jews who serve in the American military. Imagine if every synagogue across the country read the names of all those who had died the previous week during these conflicts. Imagine if we honored the sacrifice of current servicemen and women with the same gratefulness shown the new IDF recruits in the Tel Aviv airport lounge.

Read our original story about 37 Jewish service members slain in Iraq and Afghanistan.

These wars would have been more real to us; for better or for worse, they would not have remained abstract, faraway conflicts whose hidden costs in treasure and human lives we will carry for years to come. Jews make up only about 1% of the American military, but that still amounts to some 10,000 people currently deployed throughout the world, according to the Jewish Chaplains Council.

Read a Forward editorial about our original set of profiles and another reminded us of their sacrifice.

It’s been two years since President Obama announced the end of combat activities in Iraq, but the fighting in Afghanistan persists, with the number of dead exceeding 2,000 and the number who return home seriously injured overwhelming our capacity to provide them with the care they desperately deserve.

On this September 11 anniversary, as Rosh Hashanah approaches, let us take up the common theme of remembrance and direct it toward those who serve, those who support them, and those who have died. They have left behind grieving families and neighborhoods. Their Jewish community should grieve for them, too.