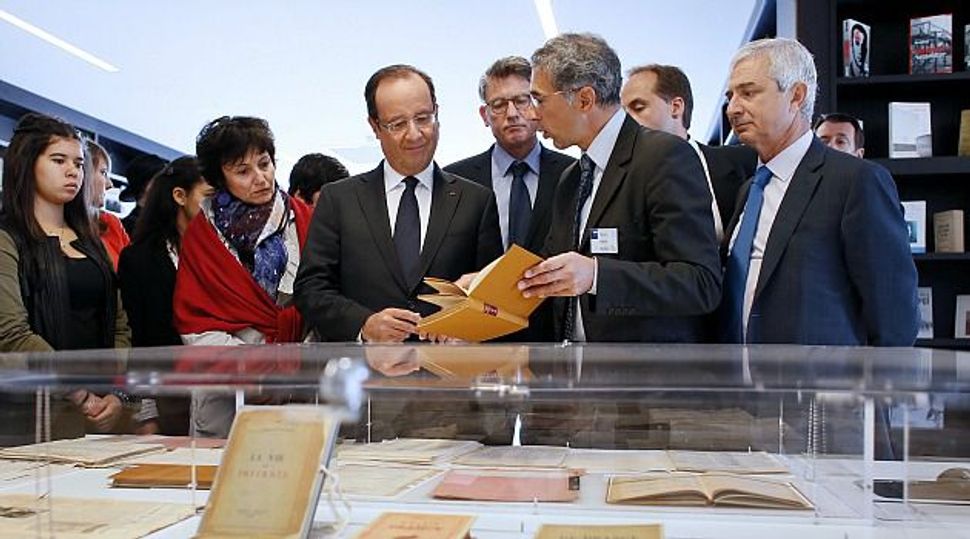 Presidential Visit: Francois Hollande remembered the Jews driven to death camps by the Nazis and their French allies. What is the link between owning up to the past and working to build tolerance in the present? Image by getty images

Despite its claim as une ville fleurie (city of flowers), Drancy is a dim and dreary northern suburb of Paris. This was fitting, however: President François Hollande was there in late September to address the town’s grim role as the transit camp for French and foreign Jews to Auschwitz, and the burden this past places upon our present.

How great a burden was, perhaps no less fittingly, underscored in an interview given that same day by Marine Le Pen, the leader of France’s extreme right-wing National Front. The timing of these events reminds one that what was true of Faulkner’s South is no less true for Hollande’s France: The past is never dead; it’s not even past.

The town of Drancy was long a crown jewel of the so-called “red belt” — the militant strongholds of the French Communist Party — that surrounded Paris from the 1930s to 1970s. Here, as elsewhere along the belt, large apartment blocks were quickly and cheaply constructed in order to house the influx of workers. The planned neighborhood of La Muette, begun in 1933 and wedged between the avenues Jean Jaurès and Auguste Blanqui — two of the iconic heroes of the French left — was one of these sites. Defined by drab rectangular slabs formed in a U-shape, La Muette seemed from its very inception a staging area for despair and desolation.

But as history would have it, this experience was visited not on industrial workers, but on French and foreign Jews instead. With the advent of the anti-Semitic Vichy regime in 1940, La Muette became a detention center for foreign elements to the French body politic. Hardly had the ink dried on Vichy’s second salvo of anti-Semitic legislation in 1941 when French police closed off the 11th arrondissement (borough) in eastern Paris and launched a systematic hunt of Jewish men. They arrested more than 4,000 and shipped them to Drancy. By autumn, conditions at the center were so grim that the Germans ordered the French authorities to release 900 ill prisoners.

All of this was mere rehearsal. On July 16, 1942, nearly 1,000 French police fanned out across the eastern boroughs of Paris, arresting Jewish men, women and children. While the SS officers overseeing the operation, dubbed “Spring Wind,” had expected a haul of 30,000 Jews, only 13,000 were caught: Some police had warned their prey, and many horrified civilians helped hide their neighbors. As for captured Jews, childless adults were sent immediately to Drancy, while families, after being subjected to the hellish conditions of the indoor sports arena Vélodrome d’Hiver, soon followed. The first convoy, composed of French trains driven by French rail employees, left Drancy for Auschwitz at the end of the month; the last convoy pulled out of Drancy exactly two years later. Of the 75,000 French and foreign Jews shipped to the death camps from French soil, more than 70,000 left from Drancy; of these 75,000, 2,500 men, women and children survived.

At the memorial ceremony, a solemn Hollande declared that France’s work “was no longer about establishing the truth.” Instead, the task was to “transmit” this truth to present and future generations. On the first count, he is right. The path-breaking research of historians like Robert Paxton and Michael Marrus has established the truth about France’s active complicity in the Final Solution. No less important, they have revealed the currents of xenophobia, racism and anti-Semitism that burrowed deeply into France’s prewar cultural and political landscape — currents that swept up not just Jews, but Gypsies, Spanish refugees and other foreigners. As Paxton and Marrus conclude in “Vichy France and the Jews,” the 1930s were “not a happy time to be different in France.”

Nor are the 2010s. The sincerity of Hollande’s sentiments is beyond doubt, but the “transmission” of these historical truths seems more questionable. First, there are the inconsistencies within Hollande’s own government, which has broken up several camps of Roma, or gypsies, and expelled them to Romania — a policy Hollande denounced when carried out by his predecessor, Nicolas Sarkozy.

There is, secondly, the unhappy ideological consistency of the National Front. On the same day Hollande spoke at Drancy, Le Monde published an interview with Le Pen. In the wake of the riots over the anti-Islamic film “The Innocence of Muslims,” Le Pen declared that, as president, she would “kick out of France every Muslim fundamentalist.” More striking was her vow to outlaw the wearing in public not only of the Muslim headscarf, but also the Jewish kippah. Her remarks predictably sparked a firestorm in the French media, but Le Pen has refused to back down. While she allowed that the kippah “does not pose a problem for France,” Le Pen nevertheless would ask French Jews to “make this little effort, this small sacrifice” to safeguard the Republic’s secular character.

She did not say whether she would also call on French Catholics wearing large crosses to make this same sacrifice.

The sociologist Sylvain Crépon notes that Le Pen, while pretending to defend French laïcité, or secularity, instead is bolstering her movement’s virulent nationalism, one with historical ties to Catholicism. In effect, Le Pen “wants to show that she treats all religions equitably, that is to say below Catholicism.” Gazing at the new museum at Drancy, a spare and airy structure replete with conference rooms and library, one can only wonder if its effort to transmit historical truths can overcome the increasing ideological static covering France.