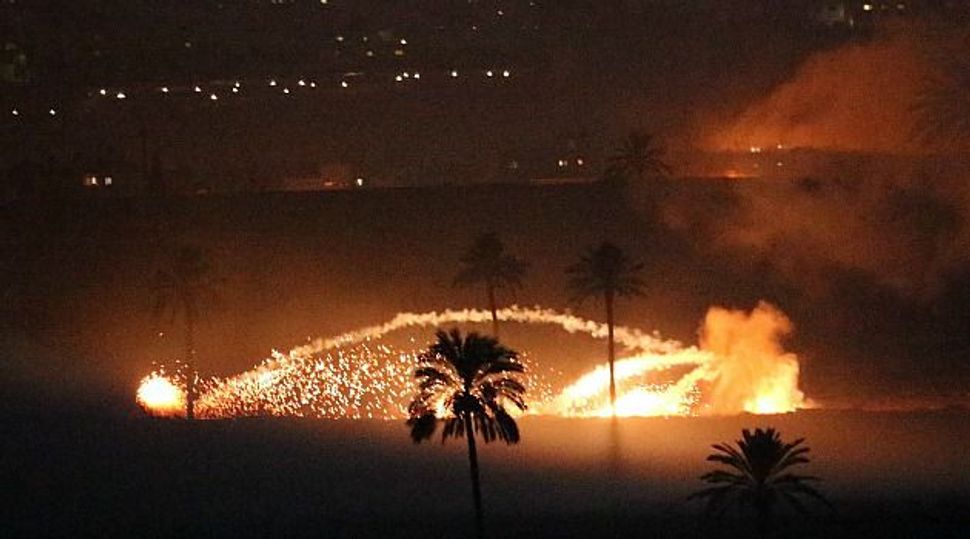 When Will We Learn? There is no military solution to Israel?s fight with Gaza. So why is another futile war looming? Image by getty images

How much collateral damage is too much?

That is a question that should be asked regarding America’ drone operations in Pakistan and Afghanistan, but it cannot be answered except episodically because nothing about those operations is available for public scrutiny. It is also a question which must be asked of Israel in connection with its futile bombardment of Gaza.

The Israeli army has stated that it is working to reduce as much as possible any harm to Palestinian civilians as part of its operations in Gaza. The IDF has emphasized that people in areas that the army attacks are sent warnings via text message, phone calls and leaflets telling them to stay away from Hamas militants. But that did not help the Jamal Dalu, whose sister, wife, two daughters, daughter-in-law and four grandchildren ages two to six, four children and five women, along with two neighbors, an 18 year-old and his grandmother, were “mistakenly” attacked by Israeli bombs on November 18. [I put “mistakenly” in quotes not because I think that Israel intended the death of a whole family of civilians but because in the course of the kind of attack Israel has mounted against Hamas, mistakes are virtually inevitable. That is what is meant by “collateral damage.”]

According to the Israel Defense Forces, “the IDF mistakenly bombed the home of a Palestinian family, apparently due to a technical error while targeting a senior Hamas militant in charge of the group’s rocket firing teams.” Ha’Aretz reports that according to the IDF, “the source of the error was either the failure to paint the target of the attack on the correct site or that one of the munitions in the strike misfired.”

Which is, of course, the point. These kinds of things happen, no matter the efforts made to avoid them. It is no comfort at all the loved ones and the neighbors of the dead family to explain to them that the deaths were unintentional.

Now some will argue that Israel had no choice, given the barrage of rockets that were launched in Gaza and aimed towards Ashkelon and even Tel Aviv – and yes, even Jerusalem.

The question that must be asked is whether Israel’s attempt at a military solution to the rockets short of a re-occupation of the entire Gaza Strip is a plausible outcome of Israel’s actions.

Given the history of Israel’s relationship with Gaza, and its continuing siege of Gaza, military action cannot and will not solve the chronic problem. That is why I have said that Israel’s current bombardment of Gaza is futile.

Observers of the current events who have not just tuned in for the first time experience a sense of déjà vu. It is as if an endless tape were being played and replayed.

What then? If military action is a dead end, then, obviously, what is left is political action. Even if the current violence is contained in the coming days, we may be confident that it will burst out of its containment again and then again. At some point, as distasteful as it may be, Israel will have to talk with Hamas and Hamas with Israel. It must do that both because that is the only way the chronic violence might be ended and also because it is for sure the only way collateral damage can be avoided.

It is no help to explain that Israel is justified in a harsh response to Hamas attacks launched from Gaza, that it is merely exercising its legitimate right of self-defense. That may be so, but so what? Are legal formulas persuasive? Meaning: Do they bring the violence to an end? Patently, they do not.

In fact, a former head of Israel’s National Security Council, retired Major General Giora Eiland said in an interview with Ha’Aretz on Sunday, November 18, that “The Israeli government will need to make political compromises in order to reach a security arrangement that will ensure the end of rocket fire from Gaza into Israel.” This sort of agreement would include “a mutual cease-fire and an Egyptian guarantee of not just quiet, but also that no weapons will enter Gaza, and would be guaranteed by additional parties, for example, Qatar and Turkey.” Specifically, Eiland listed among the political compromises that could be made in exchange for such a security arrangement lifting the naval blockade of Gaza “so that the European Union member countries could send under supervision dinghies into Gaza’s port.”

In the meanwhile, Gaza remains a territory under siege, and that is a recipe for continuing unrest. It is a recipe for periodic outbursts of lethal violence and for more collateral damage. One need not be a dove or a peacenik to see that; one need only load the tape once more.

A close friend in Israel, one who loathes Prime Minister Netanyahu, tells me that the country has never been as united as it is now. That, as Israeli elections draw close, may help explain Israel’s behavior. But be the motives for that behavior benign or malignant, their result is both lethal and barren.