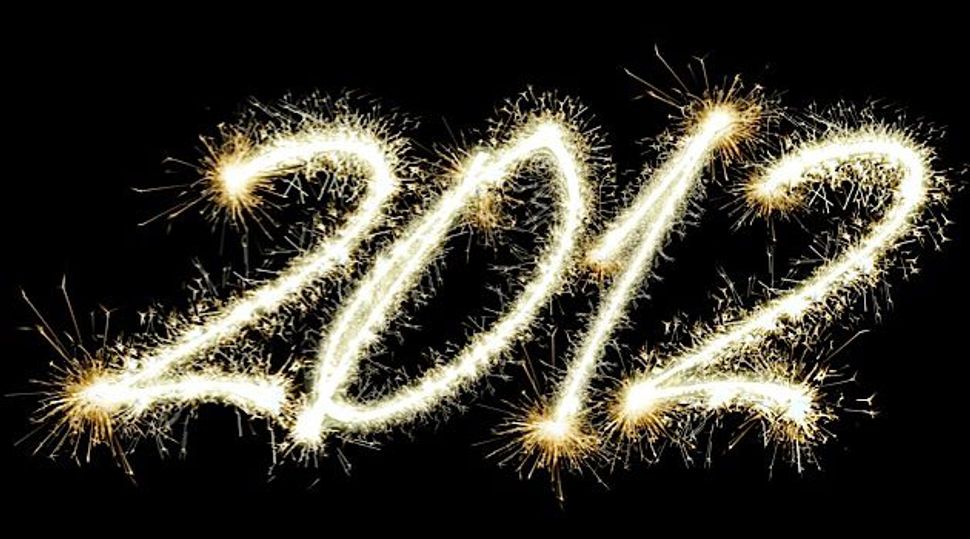 How do we say goodbye to such a year?
When we cheered, we voted, we shed a tear.
A race for president, a quest for gold,
A hurricane that ravaged young and old.

Here at the Forward, our yearly review
Of Jews in the news in two-oh-one-two
Starts with the man who tried to stack the deck
By sending his candidate one fat check

But Sheldon Adelson backed the wrong horse
And failed to get Jews to feel buyer’s remorse.
Debbie Wasserman Schultz helped keep her state
For the president and his running mate.

“Hava Nagila” was Aly Raisman’s song
With a playlist like that, how could she go wrong?
Tributes flowed for Philip Glass’s birthday Again.
And again. Isn’t that his way?

Maria Chudnovsky excelled at math
And Errol Morris charted his own path.
Barbra returned to her Brooklyn home
When her voice filled the new Barclays’ dome.

Hindy Poupko Galena, Roz Rothstein
Elana Drell-Szyfer, Ruth Lichtenstein
Proved that women can lead with skill and grit
Would that federations recognize it!

Mort Klein had his troubles at the ZOA
Sharon Brous had them praying in L.A.
In Brooklyn Andy Bachman raised the roof
But Mamet’s new play was gone in a poof.

Anat Hoffman led women to the Wall.
At FEGS Gail Magaliff followed the call
Bessie Shemtov helped kids with special needs
May they be rewarded for their good deeds!

The Emanuel brothers, Rahm and Zeke
Ben Bernanke helped us not go Greek
Jon Stewart got O’Reilly to debate
From Canada Drake increased the heart rate.

Nathan Englander wowed the critics
Saul Perlmutter was prized for his physics.
Meir Soloveichik invoked in Tampa
And who could forget the yeshiva Santa?

We said our farewells to many who died
Arlen Specter served his people with pride.
Maurice Sendak’s work, Marvin Hamlisch’s too
Took classical themes and made them seem new.

Nora Ephron’s work was funny and strong
New York was her love, and she took us along.
At year’s end came the saddest goodbye
To slain Noah Pozner, too young to die.

How do we look back on such a year?
By keeping faith with the things we hold dear.
To all of you who support what we do:
What else can we say but thank you, thank you!