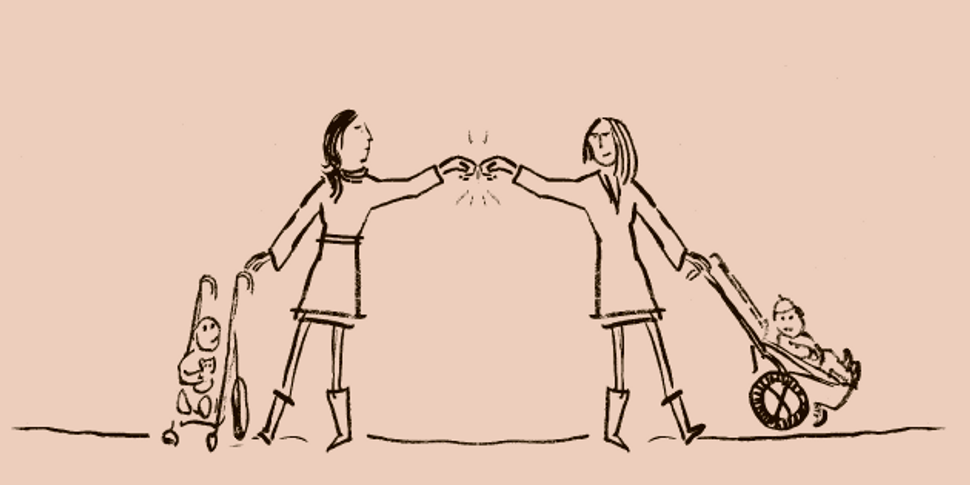 Parent Power: Will mommies decide to join forces rather than bicker? Image by Kurt Hoffman

If you want to generate a spike in traffic to your website, to sell more copies of your paper or magazine, or to get more ”likes” on Facebook, you should write a screed taking down the way particular people parent their children.

“Mommy wars” trigger media feeding frenzies whenever one of them rears its soft-spotted head. Time magazine published a cover photo of a mother breastfeeding her 4-year-old, and the talk shows erupted in a blaze of static. Various experts, both self-appointed and not, were interviewed, as well as celebrities and random pedestrians who believe they have the know-how to opine on the parenting of others.

The Wall Street Journal published a book excerpt with the headline “Why Chinese Mothers Are Superior,” and in so doing, netted Tiger Mom Amy Chua thousands of dollars in appearance fees while setting off an avalanche of blog posts (never mind that within months, the paper would publish another piece, “Why French Parents Are Superior”).

I’m a mother of four children. With each birth, I found myself more and more bewildered by why parents honestly care what anyone else thinks of their “parenting style.” (a misappellation if I ever heard one: When someone barely has time to brush his or her teeth, it’s not a “style” so much as an “accident.”)

Personally, I’m a reformed mommy warrior. I used to readily engage in the back-and-forth of happily, if not outright snarkily, judging other people’s parenting. As a new parent, this kind of activity is a self-fulfilling prophecy of insecurity: You doubt what you’re doing as a parent. In defense, you point out the flaws in what other people are doing.

I suspect that I judged others’ parenting in part out of insecurity and in part so as to avoid focusing on my own parenting decisions. Parenting is a long, tough road that, ideally, you tread for the rest of your life once the kid is born. There’s nothing easy about this journey: I understand the need to look for signposts, for maps, for directions.

But as parents become more confident of themselves and their own ability to accurately gauge what is right for them and their family, one of two things can happen. Either they can come down harder on the new initiates, making the first years of new parenthood something akin to a fraternity hazing period, or they can turn their attention elsewhere — like to the future of their children.

Our world is a broken one. Over this past year, we saw what seemed to be more than a fair share of disasters, and many of those disasters hit close to home. Homes themselves, as well as businesses, were destroyed by the arbitrary wanderings of wind and weather when Hurricane Sandy made landfall. Friends in Israel herded their children into walk-in closets — improvised safe rooms — when sirens went off signifying that rockets were being hurled at their homes and cities. Gunmen murdered innocent people in shocking locations all over our country: a movie theater, a hospital, a mall and an elementary school.

Perhaps the last — a brutal scene of carnage in which 27 people were murdered within hours, 20 of them children most of them no older than 6 — will prove to be the final straw for many. “I can’t stop thinking about it,” many mothers have told me in the days since the Newtown, Conn., massacre. Parents found themselves experiencing extreme empathy, hand in hand with terror and anger.

With that terror and anger, hopefully, will come determination. The era of social media lends itself to social action, and after Newtown, a groundswell of voices is rising up, consisting of those who want to change the country, precluding further murders of innocent children in schools. It is not the only part of our country that needs fixing. It is, however, a start.

My hope is that in the coming year, the endless feeding of the “mommy war” beast will end, and instead parents will throw away their spears of needless acrimony and join together to pick up their pens to attempt to build a better future for our children. I hope “mommy wars” will be suspended permanently, and in their stead, there will be a collective realization of “parent power.”

Admittedly, we will probably disagree with one another. Being a parent does not put you in a particular ideological category any more than being a Jew does. But we are at a point, surely, where it has been etched for us in black and white: The future, and indeed, the very lives of our children depend on us seizing the opportunity.

Jordana Horn is the former New York bureau chief for The Jerusalem Post and a contributing editor to the parenting website Kveller.com