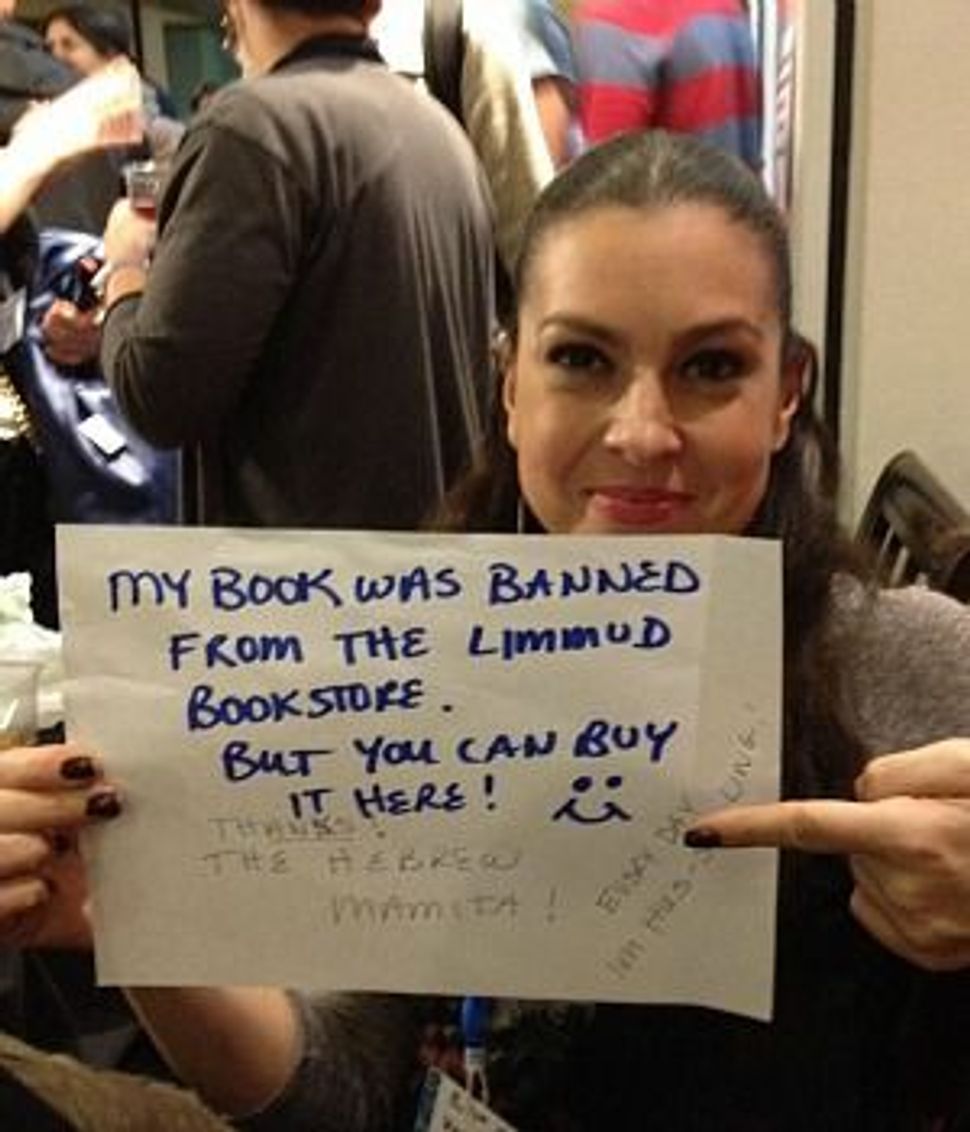 Limmud is supposed to be a big tent. But it apparently isn’t expansive enough to accommodate one author’s broad backside.

The rear end in question belongs to provocative author and spoken word artist Vanessa Hidary on the cover of her memoir, “The Last Kaiser Roll in the Bodega.” A drawing of Hidary, known at The Hebrew Mamita, is shown from behind as she poses sexily in tight jeans with Stars of David on the back pockets.

The booksellers at a pop-up bookshop at Limmud’s conference in Coventry, England, refused to sell the book.

Hidary asked the independent vendor who had been contracted to run the conference bookstore if she could at least make a sign to notify customers about contacting her website to buy the book. But the bookseller refused.

“This is not appropriate and would upset religious people who come in here,” Hidary reported the vendor’s representative as saying to her.

David Renton, the Limmud conference chairman, confirmed that the bookseller, which he refused to name, refused to sell Hidary’s work. He insisted the group was independent of Limmud and claimed Limmud went out of its way to allow the book to be sold elsewhere at the conference.

“This is consistent with Limmud values, offering participants a choice of presentations and publications on diverse topics from a range of different viewpoints,” Renton told the Forward.

Upset at the way she and her art had been dismissed, Hidary set up her own bookstand outside the conference bar and put up a sign advertising her “banned books” — all of which were snatched up quickly.

Hidary did credit Limmud with supporting her in the spat.

Still, “It was shocking for this to happen at a conference with so much diversity. It was a real smack in the face,” she said. She has sold her books a many venues, including JCCs and synagogues, and had never encountered any problem until now.

Religiously observant artist Jacqueline Nicholls also weighed in with her support of Hidary. “I am a regular attendee at Limmud precisely because it is such an interesting, creative and diverse Jewish space,” she said. “I was very surprised to hear that Vanessa’s book was banned by a bookseller who wanted to be at such a diverse Jewish event. It was great to have Vanessa at Limmud and I am sure that Limmud will continue to include an inspiring wide range of voices.”

Hidary insisted that she wouldn’t let the incident deter her from pushing her provocative works wherever she can.

“If this had to happen, it’s better that it happened to me than to anyone else,” Hidary said good-naturedly. “I’m a tough, hustling New Yorker and I could handle it.”