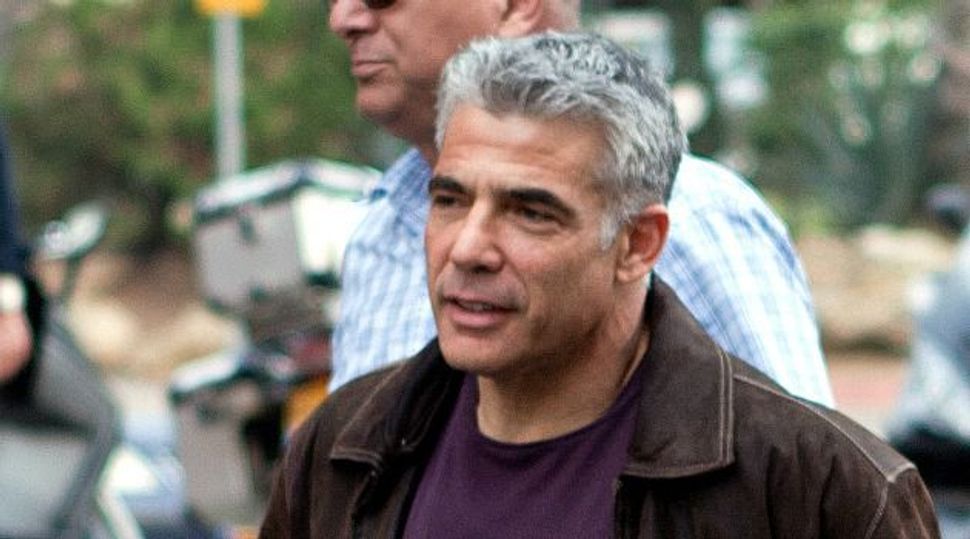 Is there a future for Yesh Atid (There Is A Future), the party that was the surprise star of the recent Israeli elections?

If past is precedent, the future of the new party is not promising. The history of parties that emerge suddenly out of nowhere strongly suggests that they return, in short order, to whence they came – i.e., nowhere. This is particularly true when their sudden success is attributable to a celebrity at the party’s helm, as is the case with Yesh Atid, led by Yair Lapid, a prominent talk-show host and columnist, son of a bold and outspokenly secularist father who served briefly as Minister of Justice in the Sharon cabinet.

But the son, for all his alleged charisma, is heir neither to his father’s boldness nor to his radical secularism. He promises attention to bread and butter issues but has little to say about the Palestinians save that Jerusalem must remain “united,” a somewhat ominous stance since it is at odds with a two-state solution, a solution that calls for the division of Jerusalem into both Palestine’s and Israel’s capitals. And, even less bold, he is apparently comfortable with the prospect of entering Netanyahu’s governing coalition.

More: Lapid’s platform states, that “no new settlements will be built during the negotiations” he foresees but that “settlement growth will be allowed within the needs of the population (Article 2).” However, the Israeli government has repeatedly agreed in the past — starting with the Oslo agreement — not to built new settlements but only to strengthen existing ones. Yet during that time, the settler population in the West Bank alone (not including the annexed territories in East Jerusalem or around it) has risen from 107,000 (in 1992) to 324,000 (2011).

The fact is that parties such as Yesh Atid have dotted Israel’s political history to no great effect. And for all the surprise of Yesh Atid’s sudden emergence from non-existence to becoming the second largest party in the new Knesset, with 19 seats, there is no reason to suppose that its destiny will break the mold.

No, the recent Israeli elections in fact had a more striking outcome — to wit, the slap in the face they delivered to Prime Minister Netanyahu, whose electoral fortunes plummeted from 42 seats in the preceding Knesset to 31 seats in the new Knesset.

True, Netanyahu will almost surely be at the helm of the new government, but his bravado cannot obliterate his poor performance in the elections.

We shall have to wait to learn what sort of a coalition Netanyahu can cobble together. Whatever the result, it is hard to imagine a government that will last the full four year term. And it remains impossible to imagine Netanyahu suddenly becoming an advocate — a serious and not merely occasional and rhetorical — advocate of a two-state solution, let alone of a genuine two-state solution. For while he doubtless sees himself as a man of the West, his heart, like Yehuda Halevi’s, is in the East. That is, the land between the Jordan River and the Green Line, the land known as the West Bank, which lies to Israel’s east — or, to use Netanyahu’s terms for that land, Yehuda and Shomron.

Will John Kerry, presuming he is confirmed as our next Secretary of State, spend valuable time on what appears so intractable a problem? We know that he is planning an early trip to Israel, but it is not as if his plate will not be full with other pressing matters. A quick trip is not a substitute for sustained diplomacy. At the same time, the American view is that resolving the Israel/Palestine conflict is essential to quieting the Middle East, especially that now it has become so volatile an area. At the least, resolving the conflict is a necessary condition, even if it is not necessarily sufficient. What, then, to do? Where to begin, how to continue?

There is every reason to believe that Kerry is of the same view as Obama: Netanyahu himself misunderstands Israel’s key interests. But what one does with that view is, to put it mildly, problematic. The United States believes (as do at least some of the European nations) that the prospect of a two-state solution is rapidly — I search here for the right word, and to my great regret, can do no better than — “dying.”

Read the riot act to Israel? Exceedingly unlikely, for a dozen reasons. (Israel’s ardent constituency in this country is only one of them.) The US may, in fact does, lament Israel’s course. But it will not curtail intelligence cooperation, military aid, or any of the other bonds that connect the two nations. The only imaginable expression of America’s exasperation with Israel’s policies and behavior, one that would surely rock the relationship, would be America’s withdrawal of its blanket support for Israel at the United Nations.

A new secretary of state is hardly likely to go there, to spend the personal and political capital such an action would involve.