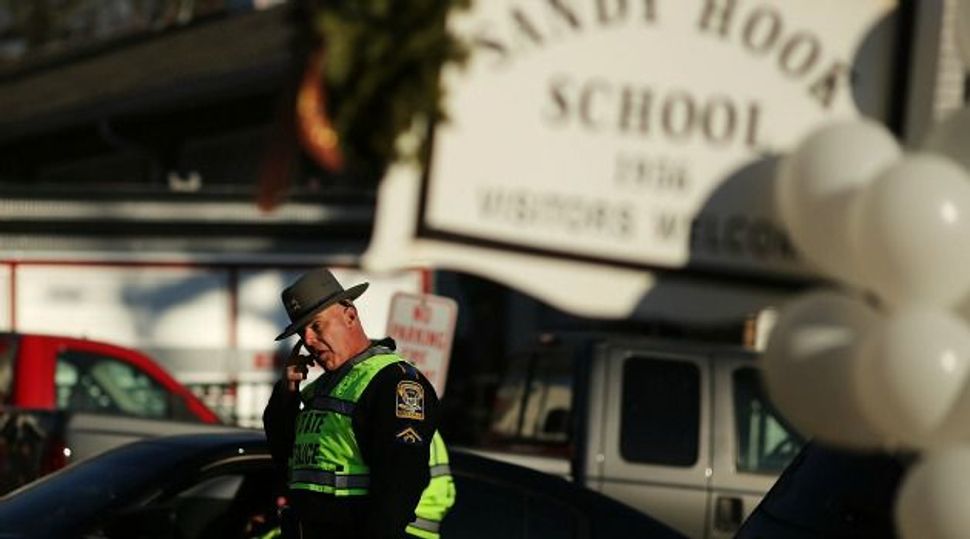 Save the Children: A police officer stands guard after shootings at Sandy Hook school in Newtown, Conn. Jewish schools should wake up to the danger and implement security training immediately.

The horrific murder of 20 small children and six adults at an elementary school in the quiet suburb of Newtown, Conn., was a jolting reminder of just how vulnerable our schools remain. Practically overnight, parents around the country demanded that schools significantly improve their security, and administrators began the process of deciding what changes needed to be made, how quickly they could be implemented and how to pay for them. In many ways, the Sandy Hook massacre was the 9/11 of the American school system. It was the unfortunate wakeup call that was needed to show that too many of our schools are wholly unprepared to deal with most types of major emergencies.

Yet Sandy Hook Elementary School itself did have a relatively robust plan in place for dealing with active shooters and other emergencies. It was a plan that not only saved a lot of lives on that horrific December 14 morning, but was also significantly more advanced and drilled than what exists at most Jewish schools. At Sandy Hook, new security protocols had recently been implemented. Contrary to initial reports, all doors were locked when the shooter, Adam Lanza, arrived at the school.

Lockdowns had been rehearsed, and teachers and staff quickly jumped into action to protect their students, several at the cost of their own lives.

For Jewish schools, the risks of attack are in many ways higher than at non-Jewish institutions, and therefore the importance of operational training is even more relevant. All schools run the risk of an attack by a mentally disturbed person, disgruntled employee or angry student. Yet Jewish schools also run the risk of attack by those who specifically want to target Jews because they are Jews. This should not be construed as an alarmist comment or overreaction, but rather a reality. The government of the United States has for years recognized that the Jewish community is at an increased risk. It is the reason that in 2010 — the last time data was released — 94% of all Department of Homeland Security grants for houses of worship and schools went to Jewish institutions.

Through good policing, intelligence and, in some cases, just sheer luck, most plots to attack American Jewish institutions — including schools — have been unsuccessful. Attacks that have succeeded — such as the August 1999 shooting attack on the Los Angeles Jewish Community Center, which injured children and a camp counselor —did little to raise the Jewish community out of its complacent slumber.

Security training for our schools can truly be a game changer for three main reasons. The first is that nearly every crime committed, be it a terrorist attack or a home burglary, involves some sort of surveillance of the target. To identify and contact law enforcement about a potential attacker operating during this pre-attack phase can literally help avert a disaster. Second, nearly every major active shooter incident over the past 10 years involved the attacker acting visibly suspicious, especially in terms of the clothing worn: camouflage, military vest, all black, hockey masks and shirts with hateful messages.

Basic behavioral detection and situational awareness trainings could have helped identify these suspicious individuals prior to an attack taking place. Finally, nobody knows the community as well as the community itself. We are blessed with incredible support and professionalism from law enforcement, but only with vigilance and assistance from the community can the police department most effectively do its job. Just saying “If you see something, say something” is nice; knowing what to see and how to say that something takes things to another level.

To date, major Jewish organizations are yet to embrace the idea of this sort of intensive security training, and are providing no financial backing to support such a program. Likewise, too many schools are now jumping to buy security hardware and to implement guards without understanding that they, too, must play an active role in protecting their children. Until they do, the Jewish community’s security response will remain incomplete.

The New York City Police Department released a report recently that indicated evidence of an increase in attacks by active shooters in the United States since 2000.

With each successful new incident, the likelihood of additional, deadlier attacks increases, as well. Many of the attackers are familiar with the massacres of the past: They learn from them, seek to emulate and outdo them; they seek infamy and historical relevance. The security of our children’s schools is of critical importance.

The Jewish community must do more to help promote effective security procedures. And that means more security training, for starters.

Joshua Gleis is an author, analyst and international security consultant. He blogs at www.joshuagleis.com.