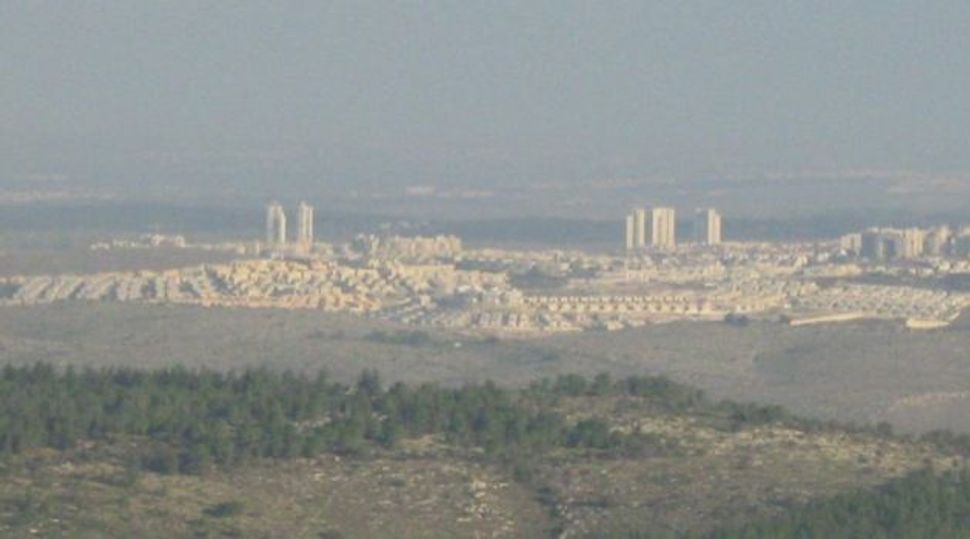 People overseas don’t understand the amazing success of Yair Lapid in Israel’s January 22 parliamentary elections. He hardly said a word about the Palestinians, the peace process, terrorism, war — all those things that Israelis are supposedly preoccupied with every waking minute.

But I understand. For the past 15 years, I’ve been living in the hardcore of Lapidism, surrounded by it. Modi’in, a sparkling but sterile-looking, monotonously beige bedroom community of 80,000 midway between Jerusalem and Tel Aviv, built in 1996, smack up against the Green Line, is one of 21 prosperous towns that gave a plurality of votes (in our case, 27%) to Lapid’s party, Yesh Atid (There Is a Future). But with all due respect to Tel Aviv, Herzliya, Kfar Saba and Lapid’s other strongholds, I believe Modi’in represents Lapidism at its strongest.

We’re as middle class as any of those 20 other towns, but the people here are younger, mainly in their 30s, not rich like Lapid’s pluralities in Caesarea, Savyon and Kfar Shmaryahu. So when he talks about the high cost of housing and about the burden of army service that falls on the middle class, it falls harder here. “We both work, we have two kids, the mortgage is choking us to death, we barely finish the month…. Yes, my husband does army reserve,” said “Anat,” a psychological counselor and Lapid voter in her early 30s, shopping in Modi’in’s sleek, glass-enclosed mall. “He touched on all the sensitive issues in our lives.” (None of the interviewees are being identified by name; they’re my neighbors, and this is not going to be an entirely flattering picture of the community.)

The other issue Lapid talked about was, of course, the ultra-Orthodox, the Haredim, and how they’re being supported and protected by all the people who do what they, in the main, don’t: serve in the army and work for a living. Resentment of the Haredim, not to say fear and loathing of them, is the one political passion that seems to animate the folks around here. Last summer they got upset over how the Haredim from Modi’in Illit, the giant settlement on the other side of the Green Line, were “taking over” our biggest park. And when the mayor of Modi’in Illit said the settlement’s new archaeological site, an excavated Second Temple-era agricultural village, “will be open only to the ultra-Orthodox public… without the distortions and disruptions of other places, where there is fear of hearing false opinions,” the mayor of our town retaliated during Sukkot by barring entry to the park to anyone whose national identification card didn’t list a Modi’in address.

But that was just the latest example. From day one, Modi’in has made a point of having no Haredi neighborhoods, and every time a news item or rumor went out that some Haredi operator had his eye on a vacant hill for a new ultra-Orthodox neighborhood, the

municipality would publicize an opinion poll showing that if a Haredi neighborhood were built in the city, 114% of the residents would move out. This is an overwhelmingly secular town, and people don’t want streets to be blocked off on the Sabbath; they don’t want Haredi poverty and crowding and yeshivas, and they don’t like sending their kids to the army when the Haredim don’t. Modi’in consistently has the highest rate of conscripts and combat soldiers of any Israeli town.

“I have two children who served in the army, my daughter was an officer, and they don’t even start college until they’re in their early 20s. I don’t see why the Haredim can’t do the same,” said “Esti,” a business consultant in her mid-50s who voted for Lapid. “He strikes me as a lounge lizard,” she acknowledged, “but he understands what’s important to people, and I liked a lot of the candidates he put on his Knesset slate.”

The last thing that stood out about Lapid’s campaign was how he didn’t talk about “the situation,” except to say, as an afterthought, that he was against “extremism” and in favor of a “diplomatic process.” Basically, he campaigned as if there were no occupation, no Palestinians, no Middle East. And that describes the outlook in Modi’in more so than the outlook in just about any other Israeli city, because Modi’in is right next door to the West Bank — and the people here just look right through it. They, or rather we, drive to and from Jerusalem, past army checkpoints along a highway that runs alongside the high concrete separation wall, and on which Palestinians are forbidden to drive ever since a few fatal attacks at the start of the second intifada, more than a decade ago. Palestinian construction workers sneak into town, and many sleep over in the building sites; the police sometimes arrest and fine them, but to people here, they’re invisible.

On the whole, Modi’in residents don’t want to know about the Palestinians, the occupation, the situation; nobody talks about it. As long as there’s no terror, there’s no problem — and there’s virtually no terror in Israel. Here, right next door to the West Bank, Jewish teenagers roam around all night, and the only danger is from other Jewish teenagers (no Israeli Arabs live in this city) who may be drunk and looking for a fight. Last November, at the end of Operation Pillar of Defense in Gaza, a bomb went off on a Tel Aviv bus, injuring nearly 30 people, and the terrorist turned out to be an Israeli Arab from the village of Taibeh who worked at the McDonald’s in the Modi’in mall. At McDonald’s! For us suburbanites, it was a thrilling brush with danger and notoriety.

“I didn’t care that Lapid didn’t talk about the Palestinians and the conflict; it’s not important to me. What’s important to me is the economy, and Lapid represented my interests. I’m a man of the middle class,” said “Eli,” 40, a freelance journalist for Russian-language media abroad.

Since the fearsome second intifada burned out eight years ago, politics hasn’t really touched the middle-class high achievers here. During the disengagement from Gaza, during Operation Cast Lead, during any of the tumultuous events that filled the news media in Israel and abroad, the answer you got in the shops, parks and streets to the question “How are you doing?” remained, unfailingly, “Excellent!” It wasn’t always true, of course, and even when it was true, an excellent life in Israel required long, hard work to finance it, but Modi’in is a “quality” city with quality people — parents who are endlessly involved in their children’s education and development, kids who have everything, a city with health clubs and high-tech company cars. It’s a place without Arabs, without Haredim, without poor neighborhoods. Coming from Los Angeles, I am reminded of the San Fernando Valley.

This is Lapid Country: La La Land, only with compulsory army duty. It’s Israel in the period after the second intifada. The West Bank, however, really is next door, whether you live in Modi’in or anywhere else in this country. Gaza is, too, and so is the rest of the Middle East. May Lapid and his silent plurality enjoy their fortified dreamscape while it lasts.

Larry Derfner is an Israeli journalist who blogs for +972 Magazine.