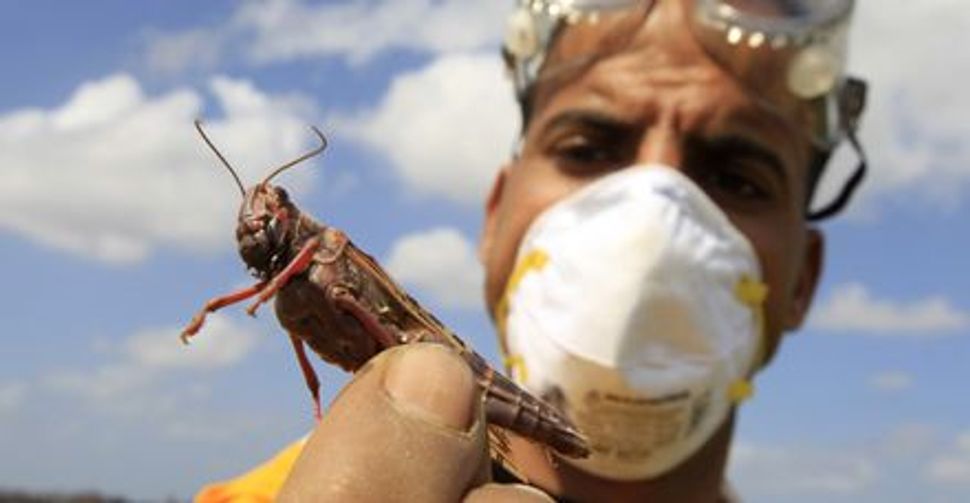 With Israel inundated by locusts, what?s the best way to prepare them for dinner? Image by getty images

Just in time for Passover, the Holy Land has been plagued by millions of locusts swarming in from across the Egyptian border.

Hysterical news reports warned Israelis in the southern part of the country to stay inside and close all doors and windows to protect against the Biblical calamity, said to be the worst to descend upon the Holy Land in decades.

But at the same time, some were searching out the pests in hopes of hauling in a tasty — and arguably kosher! — treat.

The skies across southern Israel were blackened this week by the flying insects. Some fields were damaged before the Agriculture Ministry was able to send out crop-dusters to battle the tiny beasts. Fortunately, the pesticide application to 1,865 acres that began early Wednesday morning and extended throughout the day managed to prevent the locusts from doing more damage and moving on to the country’s central regions. Also, a cold front is expected to come in and knock out any remaining swarms.

“It’s like an insect cemetery down here,” Omri Eytana, a farmer from Moshav Kmehin the Nitzana area, told Army Radio as he inspected his fields after the crop-dusting was over. He reported that his tomato plants, which were protected by nets were in good shape, but that there was extensive damage to potato crops.

It was feared that the locusts would cause hundreds of thousands of shekels of damage, but now it seems that farms fared better than expected. Shmuel Turgeman, who heads a government-run fund that organizes insurance for farmers, said the situation was “under control.”

To the dismay of some rabbis, some people were taking advantage of this rare occasion to feast on insects, which are generally deemed un-kosher. One such locust connoisseur, Rabbi Natan Slifkin, wrote in a blog post for The Times of Israel, that the Torah permits the consumption of certain types of locusts.

The Jewish communities of North Africa have apparently been eating the Schistocercia gregaria, or Egyptian desert locust species for centuries. Since Ashkenazi communities have never had a custom prohibiting the eating of locusts (which did not visit them in colder climes), they are allowed to partake of the insects visiting Israel now. Slifkin, presumably an Ashkenazi Jew, enjoys the critters for their crunchy exteriors and chewy insides.

A kind of locust culinary mania has gripped the country in the past few days. Blogger Allison Kaplan Sommer wrote on her Facebook page that she was surprised to see a chef demonstrating ways to cook locusts on a TV cooking show. The Yediot Ahronoth newspaper ran locust recipes, including one for “Locusts in Coconut Milk” calling for one kilogram of locusts either grilled or pan-fried and served on skewers topped with a coconut sauce seasoned with green onion, ginger, garlic, salt and pepper.

Slifkin is more of a purist. Since the insects do not require kosher slaughtering, he just drops them in a pot of boiling water or oil, removes them and pops them in his mouth.