What ‘Jews a Race’ Debate Means for Israel 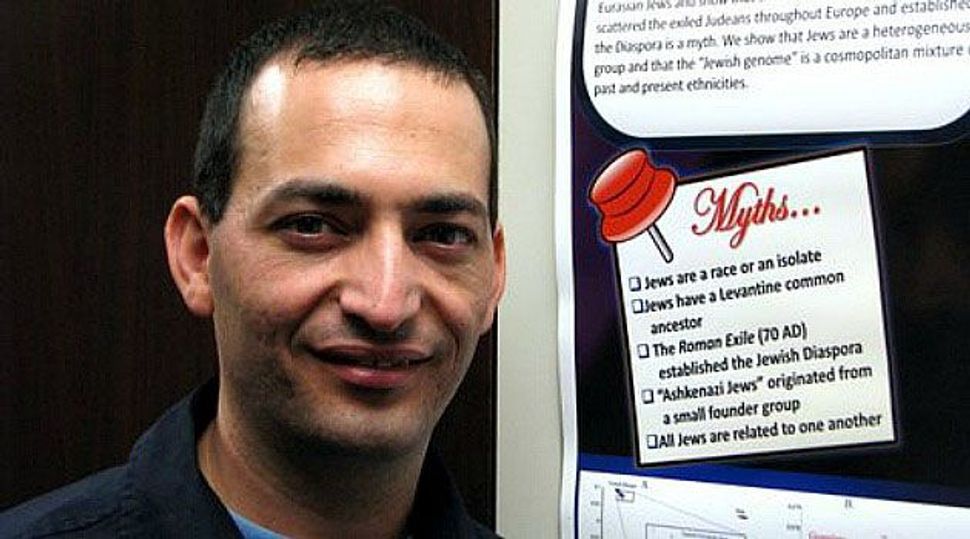 The persistent debate over the “racial” origins of the Jewish people makes a mockery of scholarship, trivializes history and perpetuates conceptions of identity that have been misused to justify everything from violent repression to affirmative action.

It is hardly surprising that Johns Hopkins’s Eran Elhaik “stirred up a hornet’s nest of controversy,” as the Forward recently put it, with his genetic study alleging the Khazar origins of the Jewish people — for, as readers undoubtedly know, deracinating Jewish DNA from ancient Israel undermines the legitimacy of the modern Jewish state.

If nationalism is based on the premise of “We were here first” and “we Jews” were not here first, then the land is not “ours,” and Zionism is little more than an instance of European colonialism.

But of no less significance is the second layer to this controversy, which involves the debate over whether the Jewish people constitute a race or a religion. Many people, particularly in the West, recoil at the suggestion that the Jews constitute a race or even an ethnicity.

After all, the racialization of the Jews fueled Hitler’s campaign for Aryan purification and paved the way to the Holocaust. It was the Holocaust that rendered the concept of a Jewish race repellent in respectable circles, and in the United States, where race and ethnicity continue to be accepted instruments of classification, the Jews are accorded the status of neither; they are white — according to the census and according to affirmative action practices.

But our current understanding of race, ethnicity, nationality and religion and the way we use these ideas did not emerge until the 18th-century Enlightenment. The ideas were politically mobilized during the American and French revolutions, and later refined through European colonialism and the global wars of the 20th century.

It is not that these concepts were invented, but scientists, philosophers, and politicians have deployed them as rigid categories to define people, to bestow upon them certain rights and to reconstruct history through an anachronistic conceptual lens.

To put it simply, the questions “Who are the Jews?” and “What does it mean to be Jewish?” are modern conundrums; they had little meaning before the Enlightenment, because nobody asked whether the Jews were a nation, a race or a community of faith. The inclusion or exclusion of the Jews in feudal Europe was not contingent on this.

Moreover, the Jewish communities of Europe did not question whether they were a nation, a race or a religion. They were all of these things and none of these things; they were the Chosen People in Exile whose identity was built upon theology, ritual and a narrative of common descent.

Until the the Jewish Enlightenment, the Haskalah, Ashkenazi Jews did not, and had no reason to, separate religion, nationality, ethnicity and race, for they had no bearing on their present and there was no reason to think that such concepts would have profound implications in the future.

But the implications did become profound, because ethnic nationalism became the order of the day during the 19th century. “All nations have the right to self-determination” is rooted in the concept of kinship and common descent; “We were here first” became the battle cry of those seeking a state, and continues to be the mantra of those denied one. It is the primary rhetorical device through which Palestinians have demanded Palestine, much as the Serbs, Croats, Bosnians and Kosovars deployed it to violently dismember Yugoslavia two decades ago.

The genetic origins of the Jewish people have no relevance as to whether Israel has the right to exist as a Jewish state, even if the Jews can no longer say, “We were here first.”

For it is undeniable that throughout the 2,000 years of galut, or exile, world Jewry articulated a theological and genealogical connection to Eretz Yisrael. But more important, a Jewish state became necessary because of the pseudo-scientific racialization of the Jews in the 20th century, which rhetorically and politically transformed 9 million Europeans into a stateless Semitic race, unwelcome on the continent and slated for elimination.

The Wandering Jews of medieval Europe may have suffered severe persecution as the killers of Christ, but in the 20th century, “exile” took on a far more sinister meaning, as it rendered the Jews into a deracinated people who allegedly (and one might say genetically) lacked loyalty to European blood and soil.

It would be an overstatement to suggest that the early Zionists from Pinsker to Herzl to Jabotinsky saw the Holocaust coming. But they understood the implications of statelessness in a world increasingly defined by ethnic nationalism.

And with the founding of Israel, the Jews of Arab lands felt the full weight of ethno-national statelessness, as regime after regime — Syria, Iraq, Libya, Yemen and so forth — made it abundantly clear that “their Jews” were no longer “theirs” and therefore not their problem; these centuries-old Jewish communities were involuntarily conscripted into Zionism and forced from their homes.

Not surprisingly, the Palestinians have weighed in on the racial aspect of the Jewish question. Article 20 of the 1968 charter of the Palestine Liberation Organization asserts that “Judaism, being a religion, is not an independent nationality. Nor do Jews constitute a single nation with an identity of its own; they are citizens of the states to which they belong.”

Such a statement is neither true nor false, but has been contingent on time and place. Moses Mendelssohn and the leaders of 19th-century Reform Judaism would have agreed with it; the Nazis and their sympathizers would not, nor would have Pinsker, Herzl and Jabotinsky. And the Jews of medieval Europe would have been utterly perplexed by it, as it was a meaningless question in the world they inhabited.

DNA studies will neither “solve” the Jewish question nor undermine Israel and its supportive Diaspora, because today there is a Jewish nation that lives and governs itself in the Middle East.

And even if most Jews give little thought as to whether or not their ancestors actually walked the streets of Jericho, Hebron or Jerusalem, the unprecedented anti-Semitism of the 20th century made the Jewish state a necessity and gave it legitimacy, and has ensured its tenacity. For all intents and purposes, the Jews are a race today, and Israel is now its historic homeland.

Jarrod Tanny is Assistant Professor and Block Distinguished Fellow in Jewish History at the University of North Carolina Wilmington, and the author of “City Of Rogues and Schnorrers: Russia’s Jews and the Myth of Old Odessa” (Indiana University Press, 2011).

What ‘Jews a Race’ Debate Means for Israel