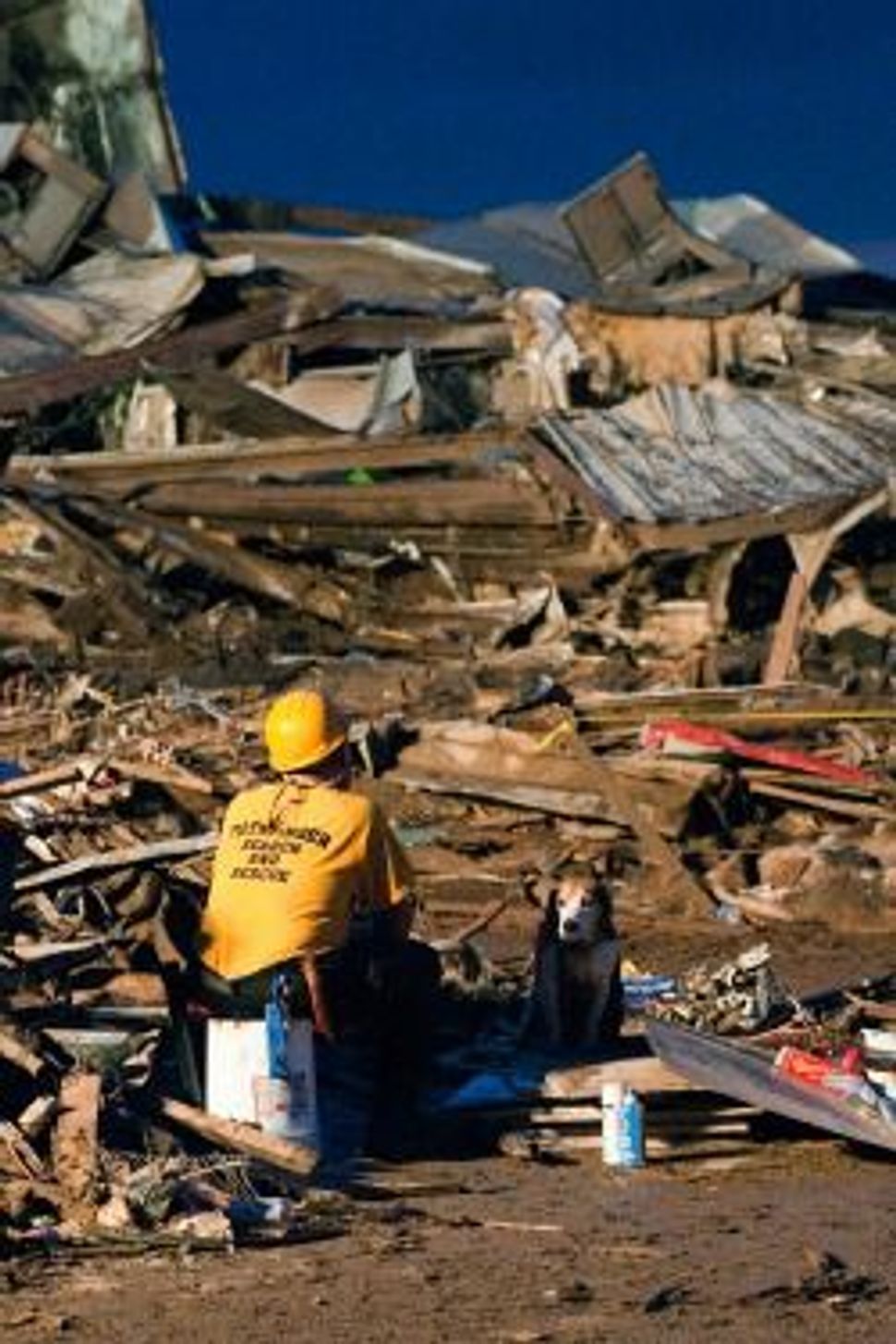 What do we know about the tornado that hit the Oklahoma City suburbs on Monday? And what can we learn from it? Specifically, how bad was it? How does it compare with other tornadoes? And was it related to climate change, as Democratic Senators Sheldon Whitehouse and Barbara Boxer are charging?

For starters, the tornado had a top wind speed of about 200 m.p.h. It was classified EF4 (winds 207-260 mph — the highest category is EF5, with winds above 261 mph). It reached as wide as 2 miles and cut a path 17 to 20 miles long. Current reports (1:00 p.m. Tuesday) say at least 24 people were killed, including at least 9 schoolchildren, though the number is far from final. Earlier estimates had gone as high as 91.

By comparison, the “average tornado has maximum wind speeds of about 112 mph or less, measures around 250 feet in width and travels approximately one mile before falling apart,” according to LiveScience.com. These make up about 70% of all tornadoes. “Strong” tornadoes, about 29% of the total, average 205 mph, stretch about 200 yards wide and run up to 9 miles, according to WeatherExplained.com. These cause almost 30% of all tornado fatalities. About 2% of tornadoes are “violent” ones that account for 70% of all tornado fatalities. They average 26 miles long and 425 yards wide.

So what do you call a violent twister that’s 2 miles wide? Colloquially, they’re called “monsters.” They’re too rare to have a scientific name.

Oklahoma’s Republican Governor Mary Fallin called the Monday twister “probably the worst I’ve ever seen.” The Huffington Post’s Nick Wing reported that Moore had “experienced similar catastrophe in May of 1999” when an EF5 hit the state with winds above 200 mph and more than 40 people killed. However, “Fallin told CBS that the tornado that struck Monday was worse.” Lieutenant Governor Todd Lamb told CNN it was like a “two-mile-wide lawnmower blade going over a community.”

As for the impact of global warming, that’s extremely unclear. Climate scientists regularly caution that climate change can’t be stated with certainty as the cause of any individual weather event, because so many factors are in play at any given moment. However, a decisive scientific consensus has emerged, particularly in the last two years, that over time climate change is responsible for a distinct rise in the frequency and severity of extreme weather events. In other words, you can’t prove that any particular superstorm is the direct result of climate change, but you can demonstrate with some certainty that these events are becoming more frequent and more severe as the climate changes in ways that, individually, make the various causes of extreme weather more likely. Unfortunately for our present discussion, the hardest type of weather event to link with any certainty is the tornado, for reasons I’ll explain in a moment.

Unfortunately, conservative climate-change skeptics tend to confuse “no proof” with a very different concept, “no evidence.” The latest example of such scientific illiteracy came in a terribly ill-timed Op-Ed essay in yesterday’s Washington Post by, of all people, the chairman of the House science, space and technology committee, GOP Rep. Lamar Smith of Texas. His arguments are mostly embarrassingly paper-thin, but his worst is his assertion that “experts at the National Oceanic and Atmospheric Administration have told the New York Times that climate change had nothing to do with Superstorm Sandy.” He links to a Times dot-earth blog post from last October that says, essentially, the opposite: that the causation can’t be proven — but that, on the other hand, there’s quite a bit of evidence pointing that way.

As for tornadoes, linking them to climate change is more complicated than just about any other type of weather event. First, we know less about the inner workings of tornadoes than of most other storms, because they come and go quickly and they’re so destructive that any instruments you place in their path to record their activity get smashed to smithereens.

Global warming is making wet places wetter and dry places drier, and creating moisture-laden air that fuels hurricanes and snowstorms, making them much worse than they otherwise would be in a climate unchanged by human behaviors.

But we can’t necessarily say the same the same about tornadoes, at least not yet. The tornado connection to global warming is tenuous, and for several reasons. Chief among them is the fact that climate change apparently affects the two major factors influencing tornadoes — energy and wind shear — in completely opposite ways.

As the planet warms, “the energy goes up, and the shear goes down,” said Harold Brooks, a scientist with the National Oceanic and Atmospheric Administration’s (NOAA) National Severe Storms Laboratory. “Thus, we have one ingredient expected to become more favorable and another expected to become less favorable.”

That said, statistician Harry J. Enten points out at TheAtlanticCities.com that there is a distinct change in the pattern of tornado formation in recent years: increasingly extreme variation in their frequency.

Although tornado reporting has in prior decades been not as reliable as today because of a lack of equipment and manpower, it’s still not by accident that the six least active and four most active tornado seasons have been felt over the past decade. Another statistic that points to the irregular patterns is that the three earliest and four latest starts to the tornado season have all occurred in the past 15 years.

Basically, we’ve had this push and pull in recent history. Some years the number of tornadoes is quite high, and some years it is quite low. We’re not seeing “average” seasons as much any more, though the average of the extremes has led to no meaningful change to the average number of tornadoes per year. Expect this variation to continue into the future as less wind shear and warmer moister air fight it out.

The overall result could very well be fewer days of tornadoes per Harold Brooks of the National Storm Center, but more and stronger tornadoes when they do occur. Nothing about the tornado in Moore, Oklahoma, or tornadoes over the past few decades break with this theory.

None of it proves or disproves senator Whitehouse’s beliefs either. Indeed, we’ll never know whether larger global warming factors were at play in Monday’s storms. All we can do at this moment is react to them and give the people of Oklahoma all the help they need.

That could cause a fight. Tom Coburn, one of Oklahoma’s two Republicans, has announced that any emergency disaster relief for his home state must be offset by cuts elsewhere in the federal budget, so it doesn’t end up costing taxpayers extra money. Heckuva job.