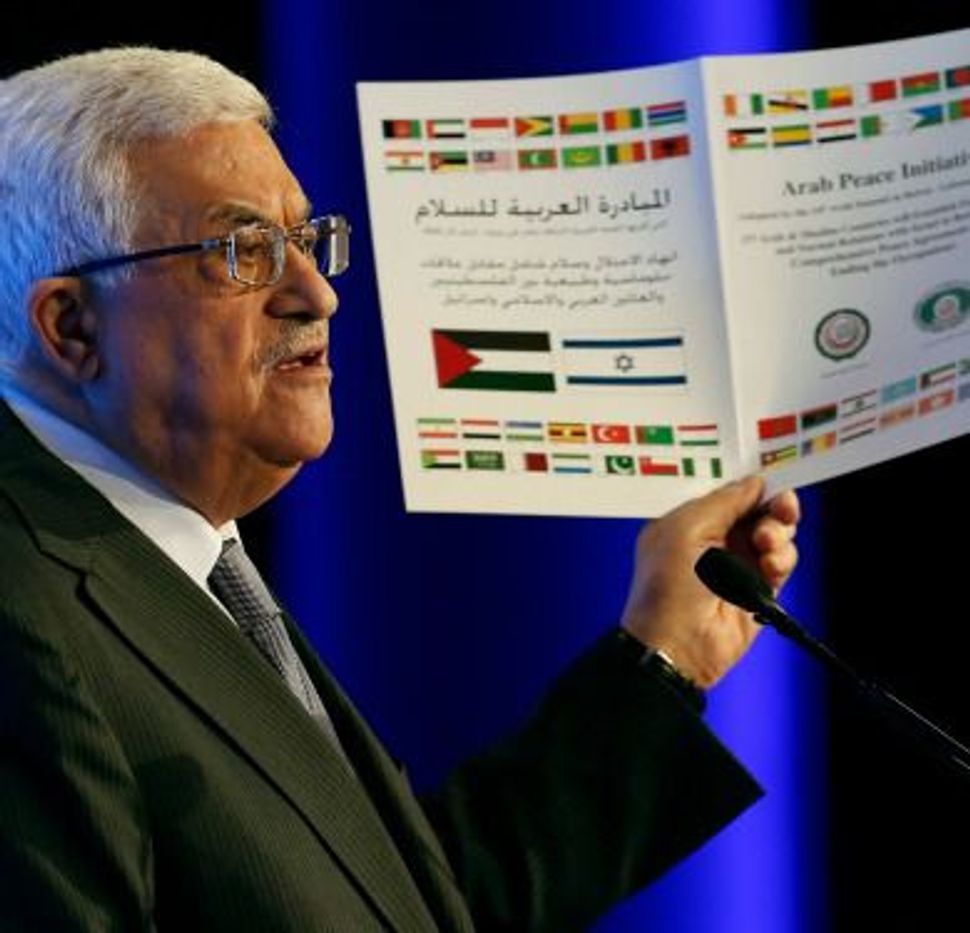 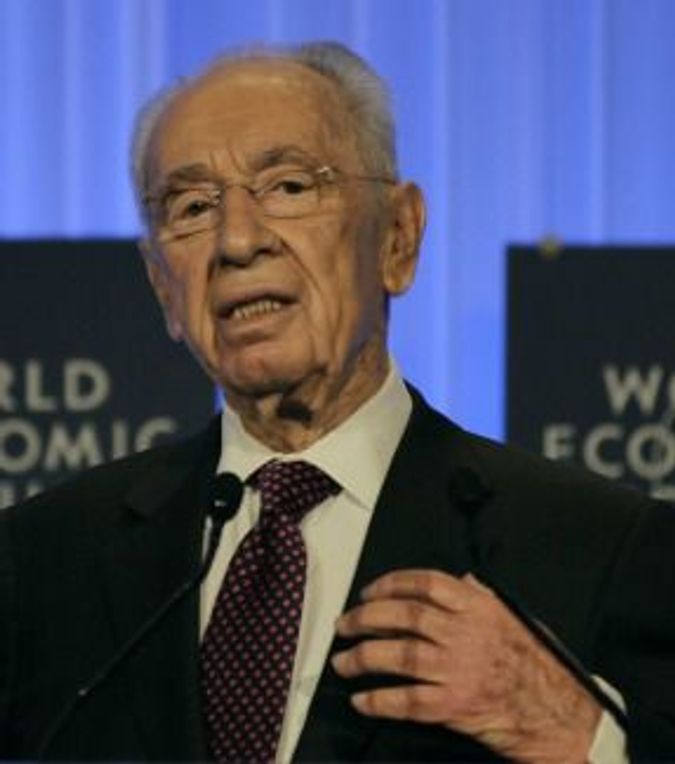 A funny thing happened to Israeli figurehead president Shimon Peres on his way to the World Economic Forum. Scheduled to address a gathering of Middle Eastern political and business leaders at a Jordanian Dead Sea conference center on Sunday evening, the 89-year-old elder statesman came under furious attack from Likud cabinet ministers Sunday afternoon for reportedly intending to endorse Israeli withdrawal to its pre-1967 borders.

The funny thing is, he didn’t say it. What he did say was that the Palestinians should return to the negotiating table to settle their disputes with Israel. Even funnier, the attacks kept coming afterwards, undeterred.

Peres was the closing speaker at the three-day conference, preceded by Secretary of State John Kerry and Palestinian Authority leader Mahmoud Abbas. Before his departure for Jordan, Maariv reported that Peres would declare (I’m translating from the Hebrew, as no English version has been published): “Israel wants peace. There is a clear majority among us that favors a diplomatic solution under the framework of two states for two peoples, along the 1967 lines, with agreed and equal border adjustments. Israel longs for peace.”

The Maariv report, by the respected, conservative-leaning journalist Shalom Yerushalmi, also said that Peres had discussed his speech earlier with Prime Minister Benjamin Netanyahu, who was in accord with his plans. Yerushalmi noted that Peres’s audience at the King Hussein Convention Center would include the president of Libya, the prime minister of Iraq and senior ministers from Saudi Arabia, Pakistan, Turkey, the Gulf states and others. The report said Peres would endorse the Arab Peace Initiative and say to Abbas, “I am your partner and you are my partner. Let’s bring peace.”

Responding to the Maariv account, international relations minister Yuval Steinitz told reporters on his way into a Sunday afternoon cabinet meeting: “I didn’t know that Peres wants to be the government spokesman. Government decisions are decided by the cabinet.”

Another official, tourism minister Uzi Landau, paraphrasing the late Abba Eban, said: “I don’t want to relate to the suggestions of this or that political figure, but foreign minister Abba Eban once said that the 1967 borders were ‘Auschwitz borders.’ What country would want borders that it can’t defend?”

Peres’s actual speech, as reported in Ynet (in Hebrew; the Ynetnews English version is truncated), included the words “I am your partner and you are my partner,” but little else from Yerushalmi’s advance account. There was no mention of borders. He referred to the Arab Peace Initiative, but didn’t endorse it. He said that by offering Israel the possibility of peace and recognition, it represented “a significant change and a strategic opportunity. It replaces the strategy of war with the wisdom of peace. We, Israelis and Palestinians, are aware that peace depends first and foremost upon us.”

Earlier, Ynet reported, Abbas had called on Israel to “withdraw from the territories in return for recognition.” He held up a copy of the Arab Peace Initiative and said, “How is it possible to miss an opportunity like this?” He also reportedly said that his Palestinian Authority was “working” to remove anti-Israel incitement from its textbooks and media, and called for a reconvening of the defunct Israeli-Palestinian anti-incitement working group. 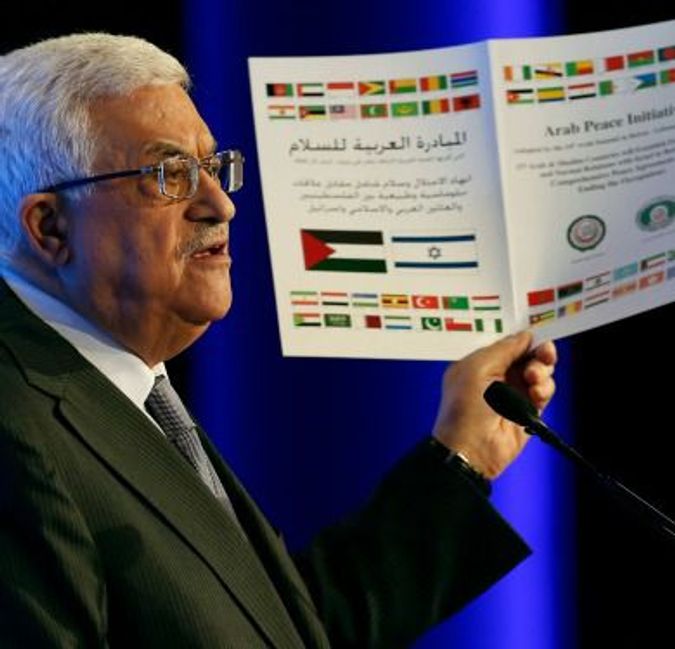 Following Peres’s speech, Maariv reported, Israeli economics minister Naftali Bennett of the Jewish Home party declared: “In contrast to Peres’s words, the Israeli public is firmly opposed to withdrawal to the 1967 lines and understands that this would bring Hamas terror to the cities of the Sharon [region] and the center of the country.” Channel 10-Nana News reported that Bennett’s office had prepared the statement in advance and “didn’t bother, apparently, to revise the press release.”

Others, however, attacked Peres even after hearing the speech. Knesset member Yoni Setbon of Jewish Home said it was “shocking that there are still politicians and public figures in the state of Israel who go blindly and obsessively after the idea of a Palestinian state despite the fact that time after time it has blown up in our faces. It’s time that the state of Israel present a clear position in its foreign relations based clearly on our historic and natural right to sovereignty over all the territories of the Land of Israel.”

Maariv’s reporter at the conference, Ariel Kahane, led his report following the Peres speech with an account that “the Jordanians walked out of the hall when the Israelis entered. ” The article went on to explain that the walkout was by a group of Jordanian reporters who objected to being seated in a press section next to the Israeli press delegation. The Jordanians returned to their seats after a brief discussion with the conference organizers.