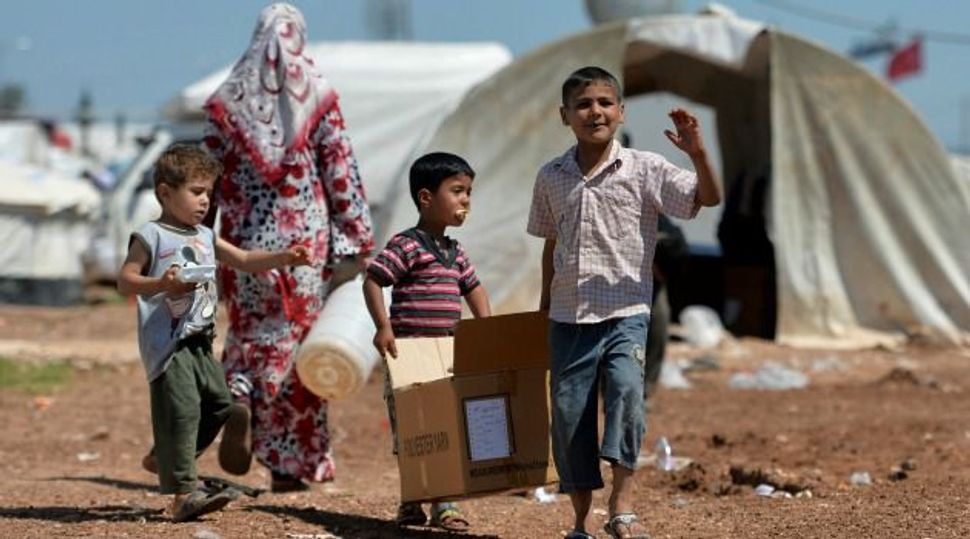 Asylum Nations: The U.S. and Israel were built by refugees. While protecting the rights of present and future refugees, Jews should not ignore the plight of the victims of Syria?s civil war. Image by getty images

June 20 is World Refugee Day. Let’s use the opportunity of this annual commemoration by the United Nations to put the “refugee crises” facing the U.S. and Israel in perspective with the true crisis exploding in Syria.

The United States and Israel are countries built by refugees. A refugee is someone who flees persecution in search of safe haven. In both countries, refugees have proven to be national assets, new citizens highly motivated to contribute to the society that took them in. Moreover, the history and teachings of the Jewish people repeatedly speak to being, and welcoming, refugees.

Yet, as the recent HIAS Report “Resettlement at Risk” discloses, some mayors, governors and state legislatures in the U.S. are saying that refugees pose too big a burden on them. In 2012, the United States brought in 58,179 refugees, and granted political asylum to 29,484 people already here. In Israel, more than 55,000 non-Jewish asylum seekers from Africa have entered the country across the Sinai border over the last six years. While some Israeli citizens have stepped forward to help them, the Israeli government has declared them to be a threat, and branded them “infiltrators” (mishtanenim). An on-line petition sympathetic to the plight of these asylum seekers calls “on the nations of the world to accept their responsibility of resolving the African refugee crisis” in Israel.

These statistics pale in comparison to those of the Syrian refugee crisis that has the potential for de-stabilizing the entire Middle East. U.N. High Commissioner for Human Rights Navi Pillay has documented 92,901 people killed in Syria since the conflict began last year. The true number, she admits, is probably much higher. Of the dead, at least 6,561 were minors, and 1,729 were under 10 years old. While the brutality of the Assad regime is well documented, atrocities are being committed by opposition forces as well. As Pillay said last week, there are “well documented cases of children being tortured and executed,”…. with “civilians bearing the brunt of widespread, violent and often indiscriminate attacks.”

According to the United Nations High Commissioner for Refugees (UNHCR), refugees who just fled the city of Qusayr described a “city reduced to rubble…There was no food left in the town and no water…people were resorting to squeezing water from the leaves of trees for nourishment.”

The consequence of the Syrian conflict is an overwhelming number of refugees: as of last week, there were 1,643,701 Syrian refugees and 4,250,000 internally displaced persons. Turkey, with a population of 73.6 million, is hosting 380,650 refugees. Proportionally that would be like the U.S. having an influx of 1.7 million refugees over the course of 18 months. The situation in Jordan and Lebanon is even more unimaginable. Jordan, a country of 6.2 million, is hosting 479,429 refugees. Lebanon, a country of 4.3 million, is already hosting 530,410 Syrian refugees. (As a UNHCR spokesperson said last week, “there is probably not a town in Lebanon that does not have Syrian refugees.”) Proportionally, that would amount to 38 million refugees pouring into the U.S. over the course of 18 months. And by the time you read this, those numbers will be thousands higher.

To put this massive humanitarian crisis in further perspective, after the State of Israel was established, there were 726,000 Arab refugees, and 856,000 Jews who were forcibly displaced from Arab lands. Combined, the number of Arabs and Jews displaced during the War of Independence and its aftermath was 1,582,000, a number we in the Jewish community have always found troubling. The number of Syrian refugees is already nearly 100,000 higher than that.

Today in Israel, one out of every 140 people is an African asylum seeker, though this number is no longer growing due to the fence built along the Sinai. And, in the United States, for every 3,000 Americans, just one refugee and asylum seeker came here in the past year.

As overwhelming as the Syrian crisis seems, there is much we, as individuals, can do.

First of all, starting on Word Refugee Day, let’s not tolerate intolerance toward refugees and the refugee “burden” being placed on the United States and Israel. We should welcome the refugees among us, not complain about them. Let’s remember that the overwhelming majority of the American Jewish community came here, or are descended from people who came here, as refugees.

HIAS, the global Jewish nonprofit that protects refugees, is launching a twelve-month campaign starting on World Refugee Day 2013. The campaign urges Jews to show their support for refugees by pledging to implement the principles in the recently developed international inter-faith “Affirmation of Welcome,” a concept that was originally proposed by Rabbi Nava Hefetz of Rabbis for Human Rights in Jerusalem and Rabbi Joseph Telushkin, and was embraced by the UNHCR and a multitude of faith groups. Sign onto the affirmation at hias.org/welcome.

Second, notwithstanding political differences with Lebanon, Jordan and Turkey, the American Jewish community should observe World Refugee Day by recognizing every day that the Syrian refugee crisis is one that these countries did not create, and that they cannot address alone. Massive humanitarian assistance is needed from the United States and the international community. For 2013, the UNHCR has appealed for $2.9 billion for assistance to refugees, the UN Office for the Coordination of Humanitarian Affairs (OCHA) has appealed for $1.4 billion for assistance within Syria, $449 million for the government of Lebanon and $380 million for the government of Jordan. So far, Turkey has not asked for aid, though that may soon change with thousands more Syrian refugees arriving each day. Please urge your lawmaker, the President, and Secretary of State to ensure that the United States shows leadership in providing humanitarian assistance to address the crisis.

This $5 billion appeal for aid, of course, treats only the symptom and not the cause – to ensure the survival of Syrians displaced by the conflict. A diplomatic solution is immediately needed to stop the slaughter. The political posturing between Russia, Iran, the United States, needs to be replaced by a genuine effort to create peace. American Jews and the American Jewish community should show our government that we care deeply about solving what the UN High Commissioner Antonio Guterres has called “the worst humanitarian disaster since the end of the Cold War.” Urge Congress, the President and the Secretary of State to make an end to the bloodshed in Syria a top diplomatic priority.