How Yiddish Could Save the Jewish People 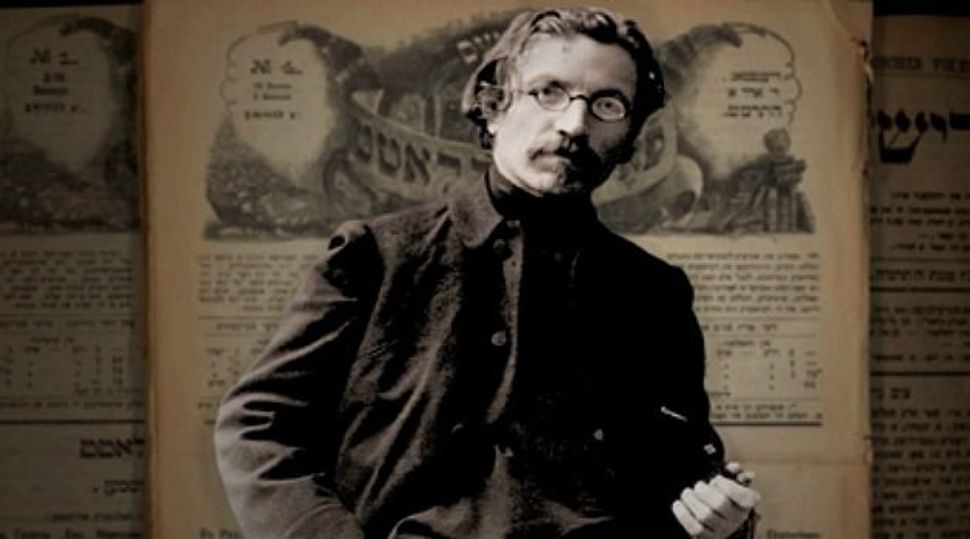 Passport to Peoplehood: Learning Yiddish gave Jordan Kutzik a better crash course on being Jewish than any day school could offer. Image by riverside films

The American Jewish community and its media frequently express concern about the Jewish future in America, citing mounting rates of assimilation and increasingly liberal trends in religious practice. In this discussion, intermarriage is frequently conceived of as being both the standard measure and the primary symptom of just how assimilated Jews are. What is usually left out of the discussion is any mention of linguistic assimilation.

In fact, most American Jews conceive of the Jewish people as being a religious group but rarely note the important role that Jewish ethnic and cultural heritage as expressed through language has traditionally played in Jewish survival.

The fact that many Jews cannot even conceive of ways of maintaining and transmitting their identity other than through religion testifies to the fact that outside of their religious affiliation, the vast majority of Jews are, culturally and linguistically speaking, hardly different from other Americans.

While religion has always played a central role in Jewish identity, Jews have also traditionally identified as not just members of the wider Jewish people, but also of specific Jewish ethnicities defined by Jewish languages. These languages, along with their respective cultures, foods and folklores, were, for the majority of Jewish history, the primary mechanism by which Jewish continuity was preserved. The knowledge of Yiddish, Ladino or one of the other Jewish languages of the Diaspora (for example, Bukhari, Judeo-Tat, Judeo-Aramaic) marked one’s identity as a member of the group. There was less need for debate about who was and was not a Jew. Whether a person was religious, a closeted heretic or an open Epicurus, she was a Jew if she spoke a Jewish language as her mother tongue.

Growing up as a typical American Jew, I spoke English at home. Despite having a bar mitzvah, I never felt particularly Jewish or connected to the religion. My closest connections to my Jewish heritage as a child were through Jewish culture: learn ing Yiddish and Hebrew songs, hearing klezmer music, reading Sholom Aleichem’s stories, and cooking kugel and matzo brei with my mother. If anyone had asked me at 14 if I was Jewish, I would have probably answered by saying “Yeah, sure,” but it was not my primary identity. I was, in short, at risk of becoming the wicked son of the Passover Seder. The son who felt he understood his obligations but felt no duty to fulfill them or even to justify his lack of participation in the ceremonies. Then I learned Yiddish.

Languages are not just vehicles for communication; they are the storehouse in which culture, tradition and wisdom reside. Languages are the lifeblood of a people. For Jewish people, uniquely Jewish languages and cultures also served as the body in which the religious soul resided and was reproduced across the generations. As such, learning Yiddish was, for me, a better course in Jewish history, culture, philosophy and, yes, religion, than I would have ever received in most Jewish day schools.

Jewish values are so built into the language that even the most mundane conversations in Yiddish about politics or sports feel more Jewish to me than conversations about the Talmud in English. This is because the idioms used to praise, to condemn and lampoon are often in and of themselves quotations from Jewish scripture. A good example I heard, while walking with a friend and looking at abandoned election posters in mid-November, was “vi esroygim nokh sukes” (like etrogs after Sukkot— that is, objects that had already fulfilled their purpose and were now useless).

The inspiration for the phrase is ultimately talmudic. It was, in fact, researching Jewish idioms that initially led me to read talmudic tractates. Seeing how these same canonical sources were reinterpreted into modern Yiddish literature has taught me more about what it means to be a Jew in the modern world and how to deal with the contradictions between my religious tradition and personal ethics than I imagine most Bible courses would be able to. The magic of modern Jewish culture is not just in the knowledge of the holy, but also in the wonderful collision of the holy and the profane.

Learning a Jewish language, of course, is not a magic bullet in the fight for Jewish survival and should not serve as the sole basis of Jewish education. But at a time when a high rate of Jewish intermarriage outside Orthodox communities is a given, religion alone doesn’t guarantee Jewish continuity. And at a time when the internal Jewish communal dialogue around Israel is increasingly polarized and off-putting, Israel alone is not enough to guarantee Jewish continuity in America. We need an element that has kept us together no matter what we are saying to one another. It might be time to turn to language to bond us as a people.

Jordan Kutzik is a fellow at the Yiddish Book Center.

How Yiddish Could Save the Jewish People