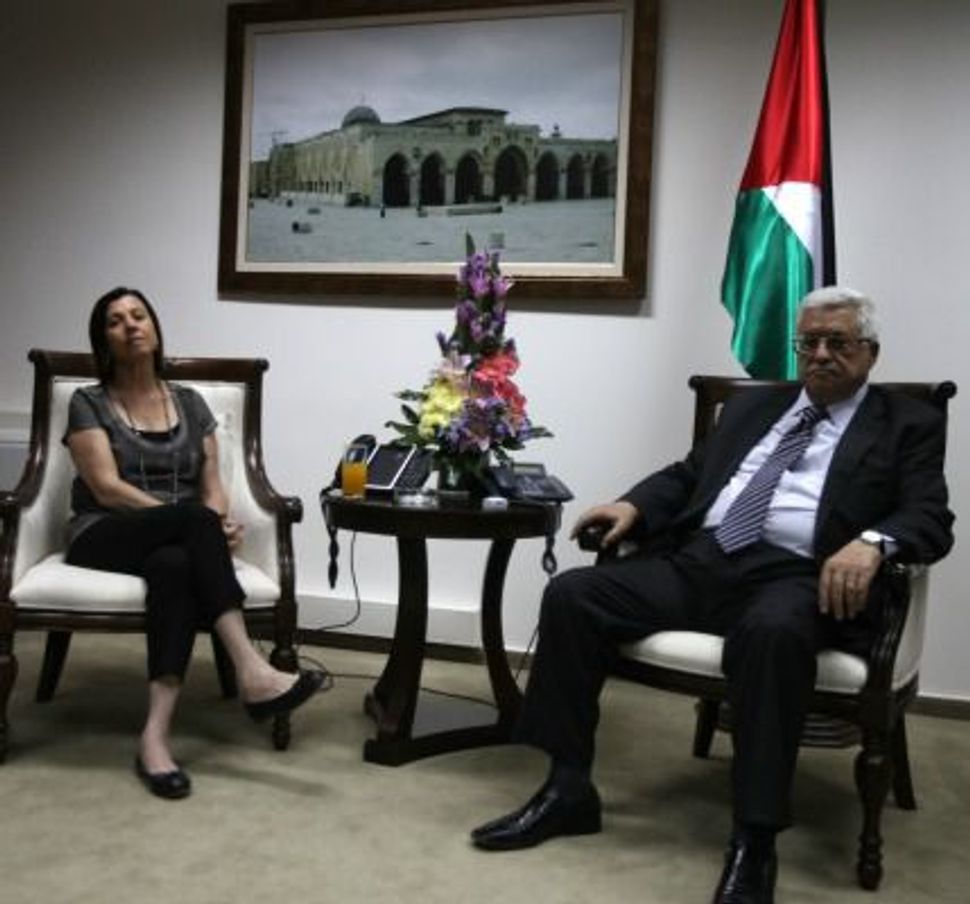 Palestinian Authority president Mahmoud Abbas told a visiting group of Knesset members on Thursday that an Israeli-Palestinian peace agreement will mean an end to Palestinian demands from Israel, and that Palestinians did not aim to return to “Haifa, Acre and Safed.” As the British Guardian newspaper reported:

He also said that the Palestinian state did not need a military capacity, but only “a strong police force.” He was speaking in Ramallah to the members of the Meretz Knesset caucus.

Abbas said critics had misunderstood his July 29 statement in Cairo that “in a final resolution” to the conflict there would not be “a single Israeli – civilian or soldier – on our lands.” Right-wing groups including the Zionist Organization of America and the Simon Wiesenthal Center jumped on the remark as evidence of anti-Semitism, and the Knesset’s anti-Semitism caucus discussed it at a meeting the following day. Abbas said his point had been that the Palestinian state would be established as a newly sovereign entity and would not agree to inherit prepositioned Israeli soldiers or settlers on its territory as relics of occupation.

This is not a new position. Abbas and other Palestinian leaders have said in the past that once their state is established, Jews would be welcome like anyone else to apply for residency or citizenship in a Palestinian state. They describe leaving settlements in place as risky because many settlers are committed to Israeli sovereignty over the territories and are considered likely to resist Palestinian rule. Still, Abbas told the Knesset members he would be prepared to discuss leaving individual settlements in place if Israel brought it up in negotiations.

Abbas’s remarks seem intended to dispel the Israeli right’s laundry list of reasons for believing the Palestinians are not prepared to make peace. Skeptics claim Abbas and his Fatah movement are not ready to declare a final end to the conflict, that they’re unwilling to give up future claims to Israeli territory, abandon the Palestinian refugees’ right of return to their former homes or accept limitations on sovereignty such as demilitarization. Abbas dismissed all those claims, one by one.

He further told the visitors, Haaretz on Friday, that he was “unhappy with the slow pace of the negotiations” and that there had been “no advances” in the first three rounds of talks, which were predictably devoted to presenting existing positions. But he voiced hope that the pace would pick up. According to Haaretz, he said:

“I know that in the beginning each side sticks to its starting positions but we hope that later on we make advances,” Abbas said. “I can’t say that I’m optimistic, but I hope we aren’t just wasting our time. In the end, the negotiations may generate a dynamic of its own in a way that would create in each of the sides an interest in reaching an agreement and a fear of what would happen if no agreement is reached.”

Israeli reactions have followed predictable lines. Haaretz responded with an editorial today headlined “Abbas has proven he’s a partner for peace,” in which it calls the remarks “important” and “courageous.”

The Jerusalem Post, by contrast, reported on the Abbas-Meretz meeting in Friday story headlined “Abbas tells Meretz MKs: no progress in peace talks with Israel.” It focused almost entirely on the Palestinian leader’s negative view of the talks so far and made no mention of his remarks about future claims or end-of-conflict.

And the right-wing Jewish Press of Brooklyn reported the event as a shock intended to outwit Israel by undercutting its bargaining position and leaving it “defenseless”:

Palestinian Authority chairman Mahmoud Abbas played his ace Thursday and told Israeli leftist Knesset Members he will make the grand concession of giving up a “demand in the future to return to Jaffa, Acre or Haifa.”

The United States will jump on his statement, which in effect concedes the so-called “right of return,” as the greatest goodwill gesture since the deadly Oslo Accords, leaving Israel in a weak and almost defenseless corner in discussions with the Palestinian Authority.

Several outlets including the Guardianand The Dawn of Pakistan quoted “an official” saying after the meeting that the comment about Haifa and Safed referred to territorial claims, not to the right of return, which the official said “is a separate issue.”

In that context, it should be recalled that previous talks, including the Camp David talks in 2000 and the Olmert-Abbas talks in 2008, discussed the right of return in terms of limited numbers to be accepted in what Israelis were prepared to call a humanitarian gesture and Palestinians were pressing to have labeled explicitly as a concession of the “right of return.” The Palestinians have formally accepted the 2002 Arab Peace Initiative, which calls for a solution to the refugee issue that is both “just” and “agreed” — that is, agreed by both sides, as one of the drafters recently emphasized in a recent conversation.

The Arab initiative also refers to U.N. General Assembly resolution 194 of December 1948, which says that refugees “should be permitted” to return to their homes under certain vague conditions, but makes no mention of a “right.”