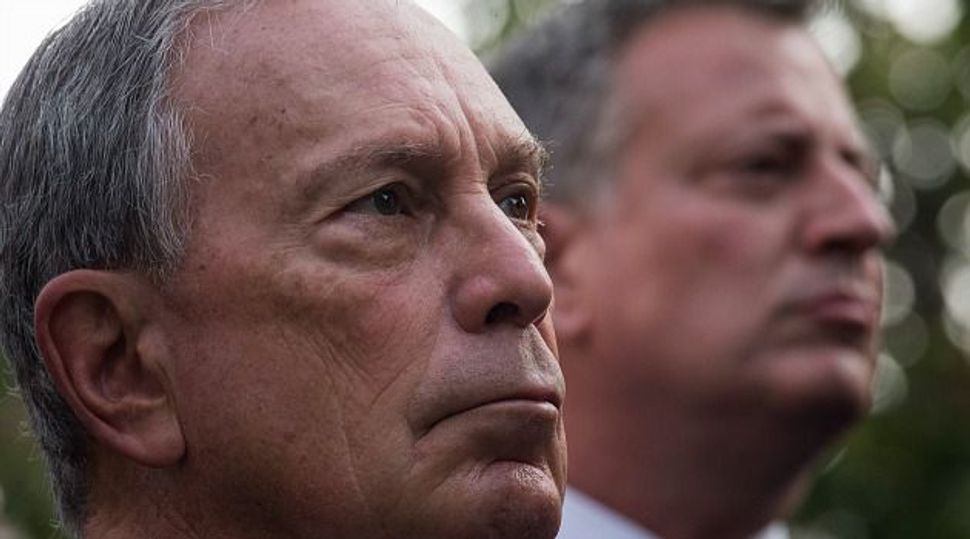 Vote for Change: If Michael Bloomberg is so popular with New York Jews, why did they vote for Bill de Blasio, the Democratic candidate who ran on a platform of opposition to his policies as mayor? Image by getty images

The Jews of New York like Mayor Michael Bloomberg. As Josh Nathan-Kazis notes in the Forward, 64% of New York City Jewish voters think that the outgoing Bloomberg is doing an “excellent” or “good” job, compared with just 45% of registered voters overall.

But their enthusiasm for the mayor did not carry over to votes for Christine Quinn, the candidate in the Democratic primary (held last week) seen as closest to the mayor and his policies. Quinn received 19% of the Jewish vote, as compared to the 38% received by Bill de Blasio, the most liberal of the Democratic candidates and Bloomberg’s fiercest critic.

Bloomberg is a Jew who has been a solid, centrist mayor—all factors that work in his favor among New York’s mostly middle-class Jewish voters. The crime rate has dropped dramatically during his tenure. He has pushed hard for gun control, a cause dear to Jewish hearts. His record in education is mixed, but bike paths and the smoking ban have made the city a more livable place. New York Jews like stability and calm, and Bloomberg has provided both.

But the bloom is off the Bloomberg rose for two reasons. The first is Bloomberg fatigue. After twelve years, New Yorkers are ready for a fresh face. The second is that the stagnation and gaping inequalities of the post-crash economy have left New Yorkers restless and frustrated, and they are looking for a mayor who shows some real concern for their struggles. The Jewish rank-and-file is not poor but is not rich either, and they care about economic issues every bit as much as other New Yorkers.

Middle class pain is not only a New York story, of course. It is an American story. The middle class has been losing ground everywhere for decades; the wages of male workers are lower now than they were in 1980, adjusted for inflation. Income and wealth are more concentrated at the top than they have been in a century. And in the last four years, incomes have skyrocketed for those at the very top of the pyramid while standing still or falling for everyone else.

And things are worse in New York than they are elsewhere. New York’s unemployment rate has gone down a little bit in recent months, but it remains well above the national rate; this has left an awful lot of New Yorkers disappointed with their lives, convinced that they are moving down the economic scale.

Furthermore, stark income differentials are more visible in New York than they are in other places. A crowded and diverse city, filled with immigrants and minorities, New Yorkers literally live on top of each other; and they watch with despair as neighborhood after neighborhood in Manhattan and Brooklyn becomes gentrified, out of reach of those on the lower rungs of the middle class. And because the city is a financial center, the glittering dinners, benefits, and receptions of the super-rich fill the tabloids daily. This is great fun when all are sharing in the good times, but a source of bitterness when they are not.

Bloomberg should have gone off quietly into the night, expressing sympathy for the plight of struggling New Yorkers. But the Mayor was incapable of this. His now famous interview with New York magazine drew attention mostly because of his observations on Bill de Blasio’s interracial family, but his other comments were more important. He said—and I am not making this up—that the very best way to help New Yorkers would be to get more Russian oligarchs and billionaires from around the world to move to New York. He reminded the poor that things weren’t so bad because 80% of them have air-conditioning. He could think of no reason to be critical of the financial industry. And he managed not to utter a single word of support, encouragement, or understanding for the plight of those who live in his city.

After 12 years as a pretty good mayor, Bloomberg presented himself as an arrogant, out-of-touch billionaire, not only tone deaf to the problems of average New Yorkers but contemptuous of their concerns.

It is time for Bloomberg to go, and it is no surprise that Bill de Blasio won the primary (or so it appears as this is written) and got the largest share, by far, of Jewish votes. It was de Blasio who showed understanding of the insecurity and anger of so many New Yorkers. It was he who spoke of shared sacrifice, challenging the entrenched and calling our leaders to account. It was he who talked the language of ordinary working New Yorkers.

The supporters of Republican candidate Joseph J. Lhota are confident that New York Jewish voters, who backed Bloomberg and Guliani and have not supported a Democrat in 20 years, have moved permanently to the Republican camp. Perhaps, although Lhota seems to be singing mostly from the Romney songbook, and that did not work out too well for the Republicans in 2012.

My guess is that de Blasio will win the Jews on November 5th. Jews will likely support him out of self-interest—most Jews, remember, are not on Wall St.—and out of a sense that at a moment when America’s priorities are warped, the Jews care not only for their own but for the injured of other tribes and other races. De Blasio is no radical, but an establishment liberal who is committed to capitalism while knowing that fairness matters—something that, sadly, the good Mayor Bloomberg appears to have forgotten.

Rabbi Eric Yoffie is the former leader of the Union for Reform Jewry. He writes on his ericyoffie.com website.