Should Israel Cut Hamas Some Slack Despite Terror Tunnel Discovery? 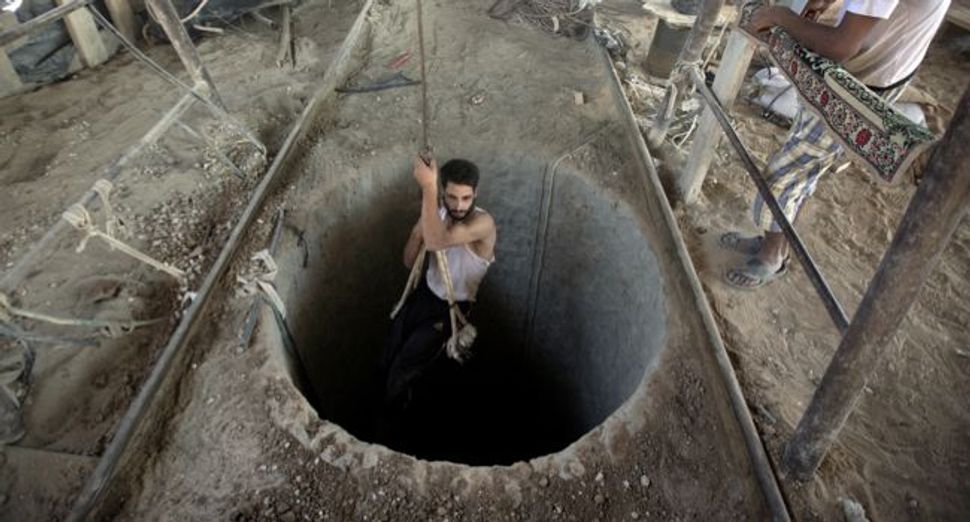 Subterranean: A Palestinian man is lowered into a smuggling tunnel beneath the Gaza-Egypt border, in the southern Gaza Strip, on September 11, 2013. Image by Getty Images

It hasn’t gotten much attention outside Israel, but that so-called terror tunnel uncovered by the Israeli military near Gaza in early October was just the tip of a major strategic dilemma confronting the Jewish state. And like so many of Israel’s puzzles these days, the debate over how to handle it is causing tension between the military and the political right.

The mile-long tunnel, stretching a quarter-mile inside Israeli territory at a depth of about 60 feet, stunned Israelis with its sophistication. Tall enough for a man to stand, lined with prefab concrete walls, it had electric lighting, telephone lines and a rail line for transporting materiel — or abductees. The tunnel ended in the fields of Kibbutz Ein Hashlosha, near the children’s houses. Military officials said it took at least a year to construct.

The opening of the tunnel to the media on October 13 raised chilling images of terrorists slipping into Israel, snatching children and fleeing back to Gaza in a replay of the Gilad Shalit episode. Shalit, 19, a soldier, was kidnapped in 2006 and held hostage for five years before being traded in 2011 for 1,027 Palestinian security prisoners. Hamas leader Moussa Abu Marzouk wrote on Facebook October 15 that the new tunnel was meant for kidnapping more Israelis.

It was the concrete walls, though, that stirred the sharpest Israeli debate. Political conservatives, led by maverick deputy defense minister Danny Danon, claimed the cement to make the concrete — 500 tons of it, the military estimated — had been supplied by Israel in a misguided humanitarian gesture. In Washington, former Bush aide Elliott Abrams wrote that it resulted from U.S. and Western pressure.

Military officials dismissed those claims. In a series of interviews, they insisted the cement entered Gaza from Egypt via smuggling tunnels. Israel, they say, has supplied cement only in limited amounts for controlled use by international agencies. Israel began a larger, less supervised flow to the private market just weeks ago, in September, long after the terror tunnel was completed. It’s been stopped again because of the tunnel, but Defense Ministry officials said the cutoff is temporary.

The reason Israel began admitting private market cement in September is that Egypt’s new military regime began shutting the smuggling tunnels in August. It’s crippled Gaza’s economy. The reason Israel is likely to resume the flow soon is that, despite protests from the right, it doesn’t want to see the Hamas regime in Gaza weakened any further at this point.

Hamas is seen as broke and virtually helpless right now. Its onetime Syrian ally, Bashar al-Assad, is fighting for his life. Its Iranian paymaster is flat broke. Iran has been giving Hamas a cold shoulder since its new president began flirting with the West. Hamas’s main patron, the Egyptian Muslim Brotherhood, is deposed and outlawed, replaced by a military regime that considers Hamas an enemy.

In the West Bank, where Hamas once posed a serious challenge to Mahmoud Abbas and his secular Fatah party, the Islamist movement is all but outlawed, its top leaders imprisoned or under surveillance by Palestinian security forces.

In Gaza itself, Hamas faces challenges from Al Qaeda-linked jihadi groups. Hamas has been trying to control them ever since it signed a cease-fire with Israel last November 21, ending Israel’s punishing eight-day Operation Pillar of Defense. Israel’s military thinks it’s doing a credible job. Just 75 rockets were fired in 40 incidents this year, mostly by jihadis, compared to 2,300 last year.

Under the circumstances, Hamas poses little threat to Israel for the foreseeable future. Were it toppled, Israeli strategists believe, whatever comes next would be far worse. For now, the military sees tunneling as a harmless diversion.

Tunnels have been a regular feature along Gaza’s southern border with Egypt for years. Since Hamas seized power in 2007 they’ve been the main conduit for commerce in and out.

The handful of tunnels that reach eastward into Israel lead only to open fields, army bases and isolated kibbutzim. They serve no conceivable purpose except terrorism.

Hamas sees the tunnels as its ticket to another Shalit-style victory and restored stature. Besides, it’s had a small army of excavators and engineers sitting idle since Egypt first started cracking down last year, following a Gaza-based attacks on Egyptian troops in Sinai. Hamas has them digging toward Israel and preparing earthworks inside Gaza for future Israeli incursions.

Israel’s handling of tunnels has changed in the past year, since Brigadier General Mickey Edelstein took command of the army’s Gaza Division. He set up special units, equipped with high-tech sensors and heavy drilling machinery, to detect tunneling activity.

According to Yediot’s Alex Fishman, Edelstein’s new approach is to let Hamas pour manpower and money into digging elaborate tunnels and then destroy them when they’re near their end-point. It’s not as scary as it looks, and it keeps Hamas occupied.

Should Israel Cut Hamas Some Slack Despite Terror Tunnel Discovery?