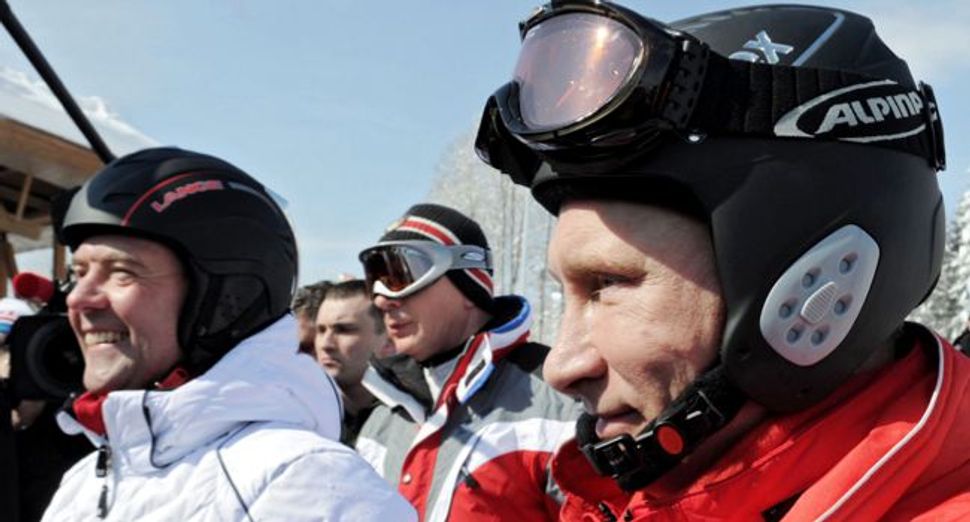 In three months from now, athletes from all over the world will arrive in the Black Sea resort town of Sochi, Russia, for the start of the Winter Olympic Games. We will experience all the requisite Olympic fanfare — the fluttering flags, blaring trumpets, nationalistic tallies of silver and gold. And the host, Russia, will bask in the world’s spotlight. Aerial shots of the futuristic new glass stadium will punctuate footage of an over-the-top opening ceremony that uses hundreds of children and a full orchestra to tell the story of the host nation’s triumphs. It will be the pride of every Russian man and woman.

Except those who are gay or lesbian.

For Russia’s extremely embattled LGBT community, the approaching games are a chance for President Vladimir Putin to distract attention away from a series of discriminatory policies that have even been physically endangering. A recent law passed in June bans the “propaganda of nontraditional sexual relations” and imposes fines for providing information about the gay community to minors.

The law has led to an increase in anti-gay violence and a general atmosphere of fear and intimidation. In early November, two masked men stormed the office of a group in St. Petersburg that works to prevent the spread of AIDS, firing rubber bullets and severely injuring one victim, who lost an eye. Also in early November, in a throwback to KGB days, Russian officials bugged a meeting of LGBT activists and Western human rights organizations, and a state television channel then broadcast the audio as an exposé of the “threat to Russia” posed by “homosexuals who attempt to infiltrate our country.”

The Olympic Charter is a very idealistic document, and it states explicitly that the practice of sport is a human right and that the Olympic spirit is one of “friendship, solidarity and fair play.” The charter’s sixth principle makes it clear that “any form of discrimination with regard to a country or a person on grounds of race, religion, politics, gender or otherwise is incompatible with the Olympic Movement.”

That Putin is openly flouting that Olympic spirit should come, perhaps, as no surprise. But what of the International Olympic Committee, which is supposed to enforce that charter? And what of all the top sponsors of the games, major companies like Coca-Cola, General Electric, Procter & Gamble, Samsung and McDonald’s? What has been their response to Russia’s aggressively anti-gay posture? Beyond toothless statements, nothing.

As Minky Worden, Human Rights Watch’s director of global initiatives put it: “The anti-gay campaign is being waged in law, in rhetoric, in society, and on television — and it is leading to violent attacks on Russia’s gay community. Putin’s law is in direct violation of the Olympic Charter, and should be repealed. The International Olympic Committee can do something about it, but has chosen not to.”

This is not the first time that the pageantry of the Olympics has been used to mask civil and human rights violations. Just ask Gretel Bergmann, now 99, a world-class German Jewish high jumper who was denied a place on her national team two weeks before the Berlin games of 1936 simply because she was Jewish.

Those games, which took place three years after Adolf Hitler came to power, offer the ultimate example of the hypocrisy of the Olympics, a sporting tradition meant to glorify internationalism that has often been used by the most despicable regimes to buff and shine their image.

By the time the 1936 games took place, Nazi Germany was being ostracized by the West, particularly because of its anti-Jewish actions, including the Nuremberg Laws, introduced just a year before the torch relay began. The games offered an opportunity for Germans to present a different picture to the world and as anyone who has seen Leni Riefenstahl’s film “Olympia” can attest, they took nationalist propaganda to a new level.

A slew of Jewish groups like the American Jewish Congress and the Jewish Labor Committee called for a boycott. And they were not alone. There was at least one member of the IOC, Ernest Lee Jahncke, a former assistant secretary of the Navy, who proposed pulling the plug on the games. “Neither Americans nor the representatives of other countries can take part in the games in Nazi Germany without at least acquiescing in the contempt of the Nazis for fair play and their sordid exploitation of the games,” Jahncke said at the time. He understood that participation meant appeasement to a country that was violating the core ideals of the Olympics. For his outspoken views, Jahncke was expelled from the IOC just before the games began, the only member to be thrown off the committee in its entire history.

He was replaced by Avery Brundage, who visited Germany, shook hands with Hitler, and returned to the States with stories about how the new Germany was treating Jews so well and anyone who said otherwise was being manipulated by communist propaganda. Brundage went on to run to the IOC for two decades, from 1952 to 1972. His presidency was followed a few years later by Juan Antonio Samaranch, a man who worked for General Francisco Franco’s fascist regime in Spain and once proclaimed himself “100% Francoist.” He headed the IOC until 2001 and, like Brundage, saw the games as a celebration of nationalism and power.

The stain of 1936 was no aberration, but a first sign that the reality of the Olympics, driven more by realpolitik and money, was very different from those ideals expressed in its charter. Jews like Gretel Bergmann were just the first to experience this hypocrisy first hand.

Defenders of the Olympics claim that the games effect change precisely because they are staged in countries like China or Russia, where the world’s attention might improve human rights conditions. But this only works if the IOC and the corporate sponsers actually use their leverage.

The run up to Sochi is such an opporunity. The IOC should call on Putin to repeal the anti-gay law. There’s no ensuring that he would be affected by such a call. But the Olympics bestows a kind of prestige, and he might just respond if their success were threatened. Such a move from the IOC would go a small way toward salvaging its own legacy and resolving the hypocritical stance of the sponsors who abandon their vaunted values once they leave America (NBC, parent company of MSNBC and the official broadcast partner of the IOC, just announced that it was canceling the actor Alec Baldwin’s new talk show because of an anti-gay slur he made, yet the company’s coverage will legitimize a country with anti-gay laws).

“This is a movement that has countenanced the Third Reich, that countenanced Soviet Russia in 1980, that allowed hundreds of people to be slaughtered in Mexico City in the Tlatelolco massacre before the 1968 games,” said Jeremy Schaap, an ESPN anchor and the author of a book about the Berlin games. “The Olympics has got a lot of blood on its hands, a lot of misery on its hands. I follow the Olympics, I’m a fan of the Olympics, but I wish the Olympics movement did more to adhere to the ideals that it espouses.”

Because those ideals exist, the Olympics can still be a force for good in the world despite this history. But first the leaders of the IOC need to sit down and read their own charter.