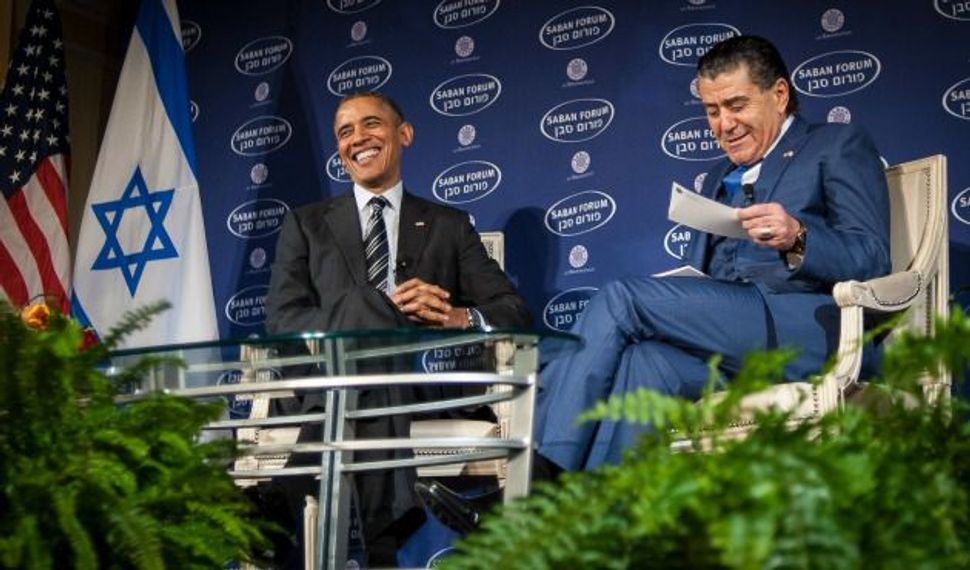 Tempers are wearing thin both in Washington and Jerusalem over continuing disagreements on the Iran nuclear talks and the U.S.-brokered Israeli-Palestinian peace talks. And the situation wasn’t helped by last weekend’s Saban Forum in Washington. The three-day forum, sponsored by the Brookings Institution, featured talks by President Obama, Prime Minister Netanyahu, Secretary of State John Kerry and Israeli Foreign Minister Avigdor Lieberman, all taking the opportunity to stick fingers in each others’ eyes.

Both Obama, who spoke Saturday afternoon (video, transcript), and Kerry, who spoke Saturday evening (video, transcript), strongly defended the agreement with Iran signed November 24. And both took digs at Netanyahu’s sharp criticisms of the agreement, Obama in a jesting, almost mocking tone, Kerry in sharper tones. Kerry went through the agreement point by point, occasionally raising his voice in anger as he noted concessions won from Iran that reflected what Netanyahu had been calling for.

Obama, by contrast, had a smile on his face through most of his 47-minute dialogue with forum backer Haim Saban. He drew frequent audience laughter, sometimes at Netanyahu’s expense, as when he referred to Netanyahu’s demand that Iran give up all enrichment capabilities. Reaching an agreement that sharply limited and monitored Iran’s enrichment capabilities is far preferable to not reaching an agreement and seeing Iran continue its progress toward a bomb, he said. In order to reach an agreement, he said, Iran would have to be:

Now, you’ll hear arguments, including potentially from the prime minister, that say we can’t accept any enrichment on Iranian soil. Period. Full stop. End of conversation. And this takes me back to the point I made earlier. One can envision an ideal world in which Iran said, we’ll destroy every element and facility and you name it, it’s all gone. I can envision a world in which Congress passed every one of my bills that I put forward. I mean, there are a lot of things that I can envision that would be wonderful.

And both American leaders argued strongly for an Israeli-Palestinian peace agreement that meets Palestinian as well as Israel needs. At the same time, they indicated clearly that the agreement would be in stages, with full Palestinian statehood coming only at the end, after Israeli security concerns have been satisfied. Palestinians have rejected a staged settlement up to now.

Netanyahu, who spoke Sunday afternoon by satellite hookup (video, transcript), spoke in more conciliatory tones, but his message was anything but conciliatory. He reiterated his demand that Iran give up all its centrifuges, flatly rejecting Obama’s compromise formula. And he added several apparently new demands. In a reversal of his longtime insistence that there could be no linkage between the Iran and Palestinian issues—that is, that ending the Iranian threat must not be contingent on Israel reaching a peace agreement with the Palestinians—he implied that Israeli agreement to a settlement with the Palestinians might be dependent on achieving its goals on the Iran front:

Our best efforts to reach Palestinian-Israeli peace will come to nothing if Iran succeeds in building atomic bombs. A nuclear-armed Iran would give even greater backing to the radical and terrorist elements in the region. It would undermine the chances of arriving at a negotiated peace.

Moreover, he appeared to move the goal posts on what Israel requires in an Iranian settlement. In addition to eliminating Iran’s nuclear enrichment capabilities—and shutting down its ballistic missile work, a U.N. demand that has not been on the Geneva agenda—Iran must give up its goal of eliminating the state of Israel.

This is a regime committed to our destruction. And I believe there must be an unequivocal demand alongside the negotiations in Geneva for a change in Iranian policy. This must be part and parcel of the negotiations. In other words, I’m saying that what is required is not merely a shift and a diminution of Iran’s capability and elimination of its capability to produce nuclear weapons, but also a demand to change its genocidal policy.

That is the minimal thing that the international community must do when it’s negotiating with Iran.

Translation: It’s not enough to eliminate Iran’s ability to destroy the Jewish state—it must give up its desire to do so. “Talk has consequences.” the prime minister said.

And if Iran doesn’t change its tune,