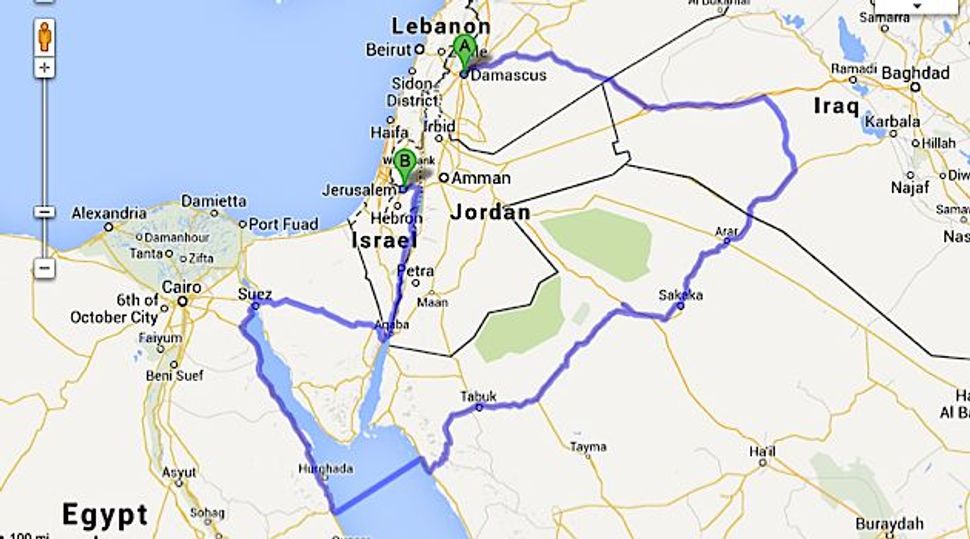 Have you ever tried Google Mapping the directions from Jerusalem to Damascus? I have, and the site’s recommendations came as a bit of a shock.

I decided to look up the travel route after reading Mairav Zonszein’s blog post about how the recent snowstorm in Israel reminded her of that country’s geographical connectedness to the wider Middle East. Specifically, she writes, “there were once open roads and railways that connected Damascus to Jerusalem.” She’s right — though you’d never know it from Googling.

Once upon a time, life was pretty calm along Israel’s northern borders. Until the late 1970s, Israeli farmers from the town of Metula would toil their agricultural lands in the Ayoun Valley inside Lebanon.

And going even further back, open roads used to connect the now war-engulfed city of Damascus to cities that are today in Israel.

Things, however, have changed. Today, Israel’s northern borders with Lebanon and Syria are highly fortified and overseen by United Nations peacekeeping forces. The Good Fence (as it was called until 2000) separated Israel from Lebanon. It’s now legally referred to as the Blue Line and demarcates the highly secured, U.N.-mandated border.

Signs along the border near Syria warn civilians of land mines, reminding travelers of a tumultuous and violent past.

Occasionally, things flare up, as they did earlier this week when a seemingly rogue Lebanese soldier shot and killed an IDF soldier. The only people allowed to cross from one side to the other today are U.N. peacekeepers.

A journey from Jerusalem to Damascus, only about 135 miles apart, would take more than 40 hours using Google Map directions. And that seems like the estimated travel time of a smooth excursion, which — for reasons that need not be mentioned — is probably unlikely.

The trip would be anything but a straight shot, and would require first heading southward to Israel’s southernmost city, Eilat — the opposite direction of Syria — and cutting through Egypt, Saudi Arabia and Iraq, which due to visa restrictions would not actually be possible for an Israeli.

Oh, and take heed before trying: You will have to find transport across the Red Sea.